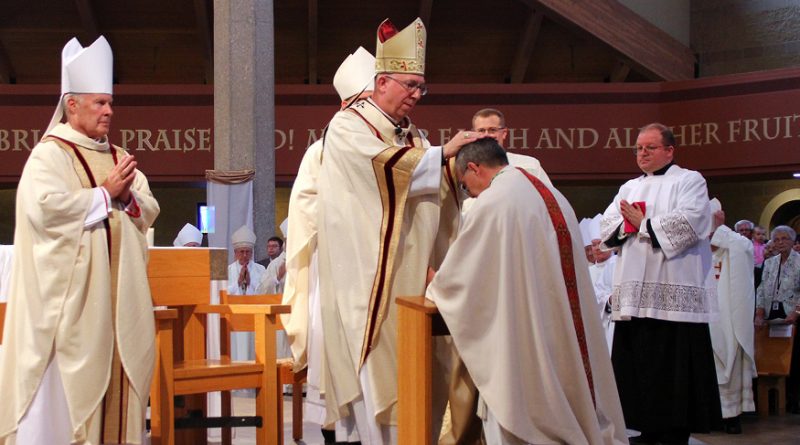 By Anne Marie Cox
Special to The Witness

DES MOINES — For the first time in more than 70 years, the Diocese of Des Moines witnessed the ordination of its shepherd.

Before a crowd of about 1,600 at St. Francis of Assisi Church in West Des Moines and many more watching online, on Sept. 27, Father William Joensen became Bishop William Joensen.

The diocese’s three previous leaders came to Des Moines after serving as auxiliary bishops in the Twin Cities, and Bishop Maurice Dingman, who served before them, had been ordained in Davenport.

Though the ordination, in some respects, resembles the coronation of a prince, with a ring, a crown (miter), a staff (crosier) and a throne (cathedra), the ordination of a bishop has a much deeper meaning in the Catholic Church according to the Gospel, said Dubuque Archbishop Michael Jackels.

“Thankfully there has been an intentional shift away from the princely identity of a bishop,” he said in his homily.

In the new narrative, the ring symbolizes the church as spouse, the miter as a crown of holiness and the staff repre­sents servant leadership after the example of Jesus, the Good Shepherd.

“Maybe that’s why the Gospel book is held over the candidate’s head before a miter is placed on his head,” said Archbishop Jackels, “to show that having a crown placed on your head, even a crown of holiness, is less important than having the mind of Christ recorded in the Gospels in your head.”

The mind of Christ means to be humble, he said.

“So if we are raised up; clothed in rich vesture; presented with a ring, a crown, a staff; seated on a throne; accompanied by songs of praise of God, according to the mind of Jesus, in response, we go correspondingly low in humble service: preaching good news, healing the afflicted, providing for the poor. May it be so.”

Pope Francis’ representative to the United States, Archbishop Christophe Pierre, said the people of Des Moines look forward with hope to the leadership of Bishop Joensen.

“Your intellect and gifts are well known, and you’ve placed these at the service of your students and seminarians and in the service of defending human life and dignity,” he said before reading the pope’s letter of appointment.

“You have distinguished yourself for your closeness to young people, keeping them close to the Lord and his church,” said Archbishop Pierre. “Now, the Lord is calling you to shepherd his people in Des Moines.”

The people of the Des Moines Diocese couldn’t be happier.

“Everything about the event was perfect! From the moment we walked in the door, the joy and faith surrounding Bishop Joensen was so comforting,” said Teresa Jamison, of St. Mary Parish in Hamburg, who attended with her husband, Rick. “It was like a big family reunion welcoming its newest member.”

Theresa Romens, of Holy Rosary Parish in Glenwood, said it’s an exciting time in the local church to witness an ordination of a bishop and to share the story with her parish family.

Portia Washington, of St. Pius X Parish in Urbandale and St. Francis Parish in West Des Moines, was among the first in line to enter the doors, arriving about two hours early. She awoke at 5 a.m. that day, and had to go to work after the ordination, but said the long day was worth it.

“It draws all of us together, and it’s important to be a witness to this,” she said. “It will have a lasting effect on me and everyone else.”

Ellen Schmidt and Marilyn Keane, also among the first to arrive, were proud to represent their parish, St. Mary of the Assumption in Panama.

Seventh-grader Matthew Pierson, whose classes were canceled at St. Francis of Assisi School, attended with his grandma, Neia May.

She gave her extra ticket to him because “he is such a good person. He’s kind and considerate.”

“I’ve never been to an ordination of a bishop, so I thought it’s time for me to come,” said Wayne Honz, of St. Patrick Parish in Missouri Valley. He and his wife, Betty, and their friend Pat Kocour drove 135 miles in the rain to see the priests and deacons, hear the music, and be a part of the celebration and fellowship afterward.

Isabella Jones, a senior at St. Albert School in Council Bluffs, served as a volunteer helping people find their way prior to the start of Mass. She looked forward to the experience.

Emma Vicker, a senior at Dowling Catholic High School in West Des Moines, said, “I wanted to come because it’s a cool opportunity to see something that hasn’t happened in 50 years.” It has been 50 years since the Des Moines Diocese has been served by a native Iowan (Bishop Maurice Dingman). Bishop Joensen was born in Waterloo and grew up in Ames.

“I thought it would be a great experience,” said Adrian Flores, of Our Lady of the Americas Parish in Des Moines. “It’s a great blessing to be here. It’s something that hasn’t been seen in many years, and it’s an honor to be a part of this.”

Bishop Joensen thanked Bishop Richard Pates for his service, Archbishop Pierre who himself celebrated his 24th anniversary as a bishop earlier that week, the diocesan staff, St. Francis of Assisi Parish, the liturgy planning team, and those who came from near and far to be with him on his special day.

“Things have been so splendid, you’d think they did this every four or five years!” he said.

Holy Trinity parishioner Karen Quiner said: “It was an awe-inspiring event. I could not only feel the Holy Spirit in an almost tangible way but also the company of the saints. It felt like we were taking part in history. I love being Catholic!”

Cox is the director of the Office of Communication for the Diocese of Des Moines. Kelly Mescher Collins is a multimedia journalist for The Catholic Mirror, the diocesan newspaper. 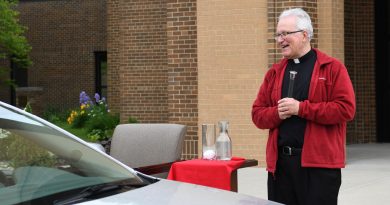