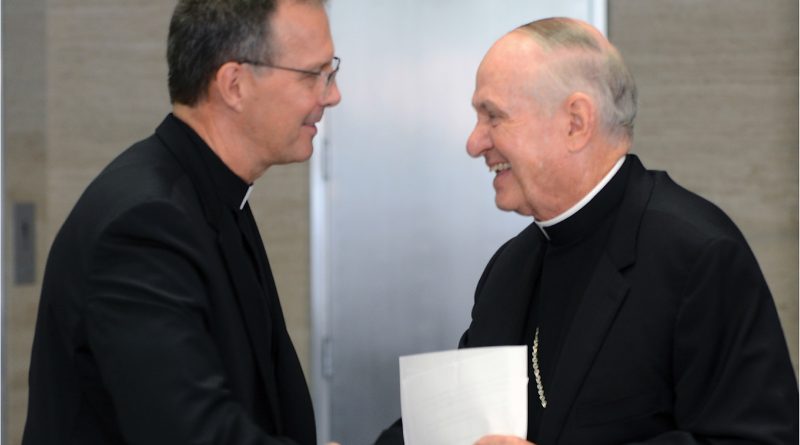 DES MOINES —  Pope Francis on July 18 named Father William M. Joensen, Ph.D., a priest of the Archdiocese of Du­buque, as the 10th bishop for the Diocese of Des Moines.

During a press conference at the pastoral offices of the Diocese of  Des Moines, Bishop-elect Joensen remarked on his appointment.

“My greatest hope and heart’s desire as a priest, soon-to-be-bishop, is that people have the graced chance to encounter Jesus, to experience his love and his mercy (as I certainly have!), and to form a friendship with him through Sacred Scripture, the life of the sacraments-— especially the Eucharist — and through the communion we know with one another,” said the bishop-elect. “Jesus is the truth I’ve staked my life on, but I am humbled and inspired when I am privileged to walk with other people and witness their deep goodness, the sacrifices they make for those they already care about and for those who don’t believe God or anyone else cares for them— as Jesus indeed does. I want to do what the good priests of this Des Moines Diocese and other pastoral ministers and people of God do: bear the living water of Spirit to others (cf. Jn. 4:10), allowing them to draw compassion, hope and strength from the abundance Jesus has poured forth in his Cross and Resurrection.”

Bishop-elect Joensen’s  ordination as a bishop and installation in the Diocese of Des Moines will be Friday, Sept. 27. The 59-year-old grew up in Ames, the oldest of five children. He attended Iowa State University, earned a bachelor’s degree in zoology and was in medical school when he discerned a calling to the priesthood. He was ordained in 1989 and served in parish ministry for six years before beginning graduate studies.

Since returning to the Archdiocese of Dubuque, he has served at Loras College in Dubuque as a philosophy professor and assisted at parishes in and around Dubuque.

Bishop Richard Pates now serves as administrator of the diocese until Bishop-elect Joensen is ordained and installed as the bishop.

“As we very happily welcome you on our common journey of making Jesus Christ known and loved in our times, we also excitedly embrace the New Moment with you as we respond to the calling of being missionary disciples of Jesus Christ,” said Bishop Pates in a prepared statement. “Welcome, Brother William.”

Father Joensen was born in 1960. He is the son of the late Alfred W. Joensen and his mother Marilyn E. who currently resides in Ames. He is the oldest of five children. His younger brother Tom and his wife Jennifer and their two children, Michael and Olivia, live in Ankeny and were founding members of St. Luke the Evangelist Parish, according to a statement from Bishop Pates.

Before completing medical training he entered the Josephinum Seminary in Columbus, Ohio. Father Joensen was ordained a priest for the Archdiocese of Dubuque on June 24, 1989. His early years of ministry were as an associate pastor in the towns of Dubuque and Waterloo.

Since 1995 he has been active both pastorally and in teaching at the college level basically combining the roles of professor and chaplain to college students. During that time, he served terms as Chaplain at Clarke College in Dubuque, Chaplain at Loras College, Director of Spiritual Formation at St. Pius X Seminary program and since 2010 he has been Dean of Campus Spiritual Life at Loras College and an Associate Professor of Philosophy. He has been a member of the philosophy department at Loras College since 2002.

He was awarded a Doctor of Philosophy degree in Philosophy from the Cath­­olic University of America in Washington, D.C. in 2002. The title of his dissertation was: “Genetic Enhancement and the Ends of Medicine and Human Life.”

He has established a remarkable compendium of academic presentations and publications, said Bishop Pates.

The Diocese of Des Moines is a  Catholic community constituted by 23 counties of Southwest Iowa, 80 parishes, 17 Catholic Schools, 3 Catholic hospitals. With the Hispanic population, we have a total of 140,000 members.

“We are growing,” stated Bishop Pates. “The non- Hispanic population has grown by 15 percent in the last ten years. Our outreach includes among others immigrants from Vietnam, Cambodia, South Sudan, Eritrea, Myanmar, Iraq, Kenya and several other nationalities.”

The diocese currently has 114 priests, 105 deacons, 19 sisters and 17 seminarians serving.

21 “extern international priests’ are also  in ministry in the diocese, according to Pates.

In his remarks, the bishop praised the diocesan staff and characterized the laity of the diocese as “extraordinarily generous and supportive.”

This article was compiled using information provided by the staff of the Catholic Mirror, newspaper of the Diocese of Des Moines. More on this story is at dmdiocese.org. The full statements of Bishop-elect Joensen and and -Bishop Pates are also posted at TheWitness
Online.org. 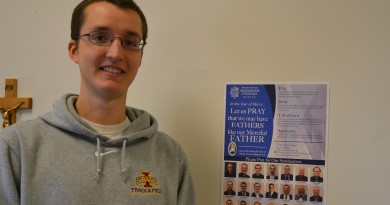 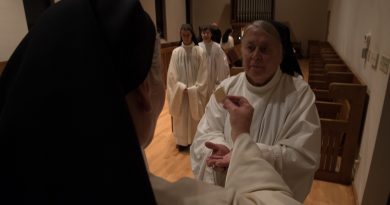