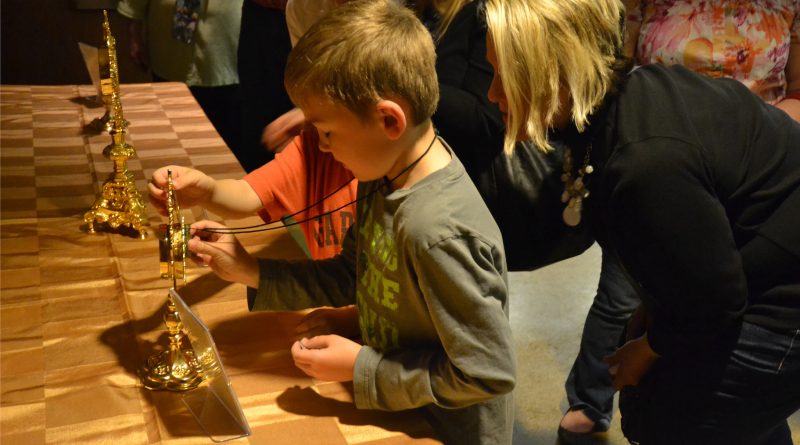 DUBUQUE — After telling the stories of a man who was healed from paralysis after touching a container holding fragments of the true cross and a 9-year-old girl who was cured of a large tumor in her stomach through contact with relics of the saints, Father Carlos Martins, CC, made a promise to several hundred people gathered in Dubuque to hear him speak before the opening of the Treasures of the Church Exhibit.

“Every saint chose to live his or her life as a giant billboard pointing to God,” said the priest April 23. “I’m going to make you a guarantee tonight. If you give God your heart wholly and completely today, holding nothing back — if you permit God to enter your life today then you will experience the presence and power of the living God today in a way you’ve never experienced before. I guarantee it.”

Father Martins, a member of the Companions of the Cross, a religious order based in Canada, is an official curator of relics for the Catholic Church. As part of his ministry, he travels to schools, churches and prisons across North America with 167 relics of saints, including a piece of a veil believed to have belonged to the Virgin Mary and two of the largest known pieces of wood from the cross on which Jesus died. Other famous saints are also represented in the collection such as St. Francis of Assisi and St. Mary Magdalene. Father Martins explained that the church gives him ecclesial authority to care for and display these holy objects as a way to catechize and evangelize. The exhibit recently visited two parishes in the Archdiocese of Dubuque — St. Patrick Parish in Cedar Rapids and St. Columbkille Parish in Dubuque. 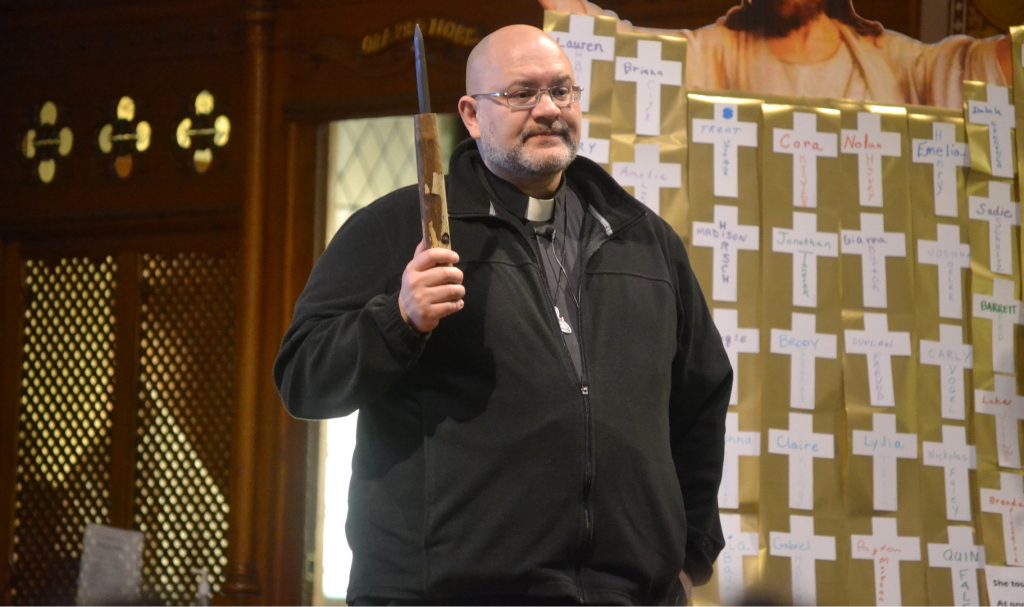 Over 600 people came to the church and parish hall in Cedar Rapids for the event there, according to Cindy Koczo, pastoral minister. “It was fabulous,” said Koczo. “The church was overflowing.” As people walked through row after row of tables lined with reliquaries filled, in many cases, with fragments of bone or hair from saints, some attendees touched rosaries and other items to the containers. Others held them and prayed for intercession or brought photos of loved ones that needed prayers. The reactions of participants ranged from detached skepticism and curiosity to profound emotion, tears, and even some physical reactions.

“We had one gentleman who has been going through a lot of pain in his legs,” recalled Koczo. “When he touched one of the relics, he felt vibrations through his whole body.”

Before opening up the exhibit, Father Martins gave a talk on the history and theology of relics. Since the beginning of the church, Catholics have collected relics, which are physical items connected to Jesus or the saints. First class relics are actual pieces of the body of a saint, second class are items the saint owned, and third class are things Jesus or the saints touched directly or things like holy cards or rosaries that have touched relics. Saving items associated with holy people has a basis in Scripture, according to Father Martins. He cited an example in the Old Testament where a dead man was brought back to life through contact with the bones of the Prophet Elisha (2 Kings 13:20-21). In the Gospel of Matthew, a woman is healed from hemorrhages by touching Jesus’ cloak (Matthew 9: 20-22), and others are healed by contact with St. Paul or St. Peter’s shadow (Acts 19:11-12, 5:12-15).

“The vehicle for the healing was the touching of that object,” explained Father Martins. “It’s very important to note that the cause of the healing was God. The relics are a means that he chooses. Relics are not magic. They do not contain a power on their own — a power separate from God. Any good that comes about through a relic is God’s will. The fact that God chooses to use the relics of the saints tells us that he wants to draw our attention to the saints as models and intercessors.”

Father Martins explained how the church determines whether a relic is real, given the reality that some people throughout history have tried to deceive the faithful with fake relics. Each relic must be verified by a bishop, abbot, or postulator (church investigator). Once this is done, the item is placed in a “theca,” a small circular container. The back of it is sealed with a string and wax seal bearing the insignia of the person who authenticated it. “The church takes the authenticity of relics very, very seriously,” said the priest. “Theca’s whose seals or strings have been broken are forbidden to be used in public veneration.”

All authentic relics also come with documents from the church, mostly in Latin, that explain their origin. Church law strictly forbids the sale of relics. The true cross and Mary’s veil After explaining the authentication process, Father Martins told the stories of how the two most famous relics in the exhibit — the fragments of the true cross and Mary’s veil — came into the church’s possession.

In the early 300s, thanks in part to the influence of his mother St. Helena, Constantine was the first Roman emperor to convert to Christianity. Afterward, he sent his mother to the Holy Land to bring back relics.

“He had the desire to convert his entire people to the Christian faith,” said the priest. “He thought his people’s contacts with these holy objects would trigger these conversions.”

St. Helena’s search for the true cross led her to a field just west of the city of Jerusalem. After Romans dug up the land, they found many crosses and other pieces of wood that had been discarded there over many years. To distinguish the real cross, St. Helena brought a very sick woman who was near death to the field and had her lay down on each cross and piece of timber. Contact with one of these crosses cured the woman instantly and it was deemed the “true cross.” Over the centuries, it was broken up and sent around the world.

“This was the relic the man touched (at the exhibit) when he received the healing of his paralysis),” said Father Martins, referring to his opening story.

The discovery of a veil belonging to Mary also occurred in Jerusalem. Scripture teaches that Mary was assumed into heaven body and soul, but her belongings were left on earth. In the year 350, according to Father Martins, church father St. Jerome visited Jerusalem and brought back a full sized veil believed to have belonged to Mary. It was placed in the Basilica of St. Anastasia in Rome, where most of it remains today. A small piece was given to the exhibit, according to the priest.

Relics still play a role in the daily life of the church today. There is a longstanding tradition of placing the relic of a saint in the altar of every Catholic Church. This tradition dates back to the first century when Christians were forced to celebrate Mass underground in the catacombs because of persecution, sometimes literally surrounded by the remains of martyrs. Father Martins also told the stories of two saints — Bernadette of Lourdes and St. John Vianney — whose bodies are miraculously “incorruptible.”

He closed with the story of St. Maria Goretti, the youngest canonized saint in church history, whom Pope Francis has chosen to highlight in this Year of Mercy. As a young girl, Goretti was murdered by a man after she refused to submit to rape. She forgave him before she died, and her intercession later led to his repentance and conversion while in prison.

Father Martins urged people to free themselves of four “handcuffs” before viewing the exhibit, which he said, keeps people from experiencing God’s grace through the saints: not attending Mass, not participating in the sacrament of reconciliation, refusing to confess certain sins during reconciliation, and finally, not forgiving those who have harmed us. After resolving to overcome these roadblocks, Father Martins told people to be open to friendship with a saint, whose relic may stand out.

“There’s going to be one saint that’s going to say ‘I want to be your friend,’” he said, explaining that some may experience a sensory connection through smell, touch or other extraordinary means, while most will feel something interiorly in the heart.

At both local events April 23 in Cedar Rapids and April 24 in Dubuque, people were able to walk through the exhibit for several hours, with permission to pick up the majority of first class relics.

“I was just overwhelmed by the presentation,” said Jim Henkels of St. Anthony Parish, who was interested in seeing the relic of St. Padre Pio. “I knew some of the story (of relics) but I didn’t know the whole story.”

Judith Williams came with her mother and brother.

“(I liked) seeing the saints and knowing how special they are,” she said. “St. Judith is my patron saint, but there’s no St. Judith (relic) here so I like St. Jude and St. Francis of Assisi.”

“You just feel the presence of all the saints in the room,” said Ann Williams, Judith’s mom, after praying in front of the true cross fragments.

Theresa McDonough, a teacher from Dubuque, said she was deeply moved by the exhibit.

“Tonight is an answer to one of my prayers,” she said. “I didn’t expect it to be this much.” Koczo relayed a story of one girl in Cedar Rapids who had brought a photo of a relative with a form of cancer.

The participant was moved when she touched the photo to a relic of St. Anthony the Abbot.

“The girl said she could hear church bells,” said Koczo.

Photos:Samuel Boehmer (center) and his brother, Bejamin (to his right), hold cross­es around their necks to a reliquary containing a relic of St. Joseph. Behind them is their mother, Brenda. The family traveled from Rockford, Iowa, to experience the relic exhibit in Dubuque. Photo 2: Father Carlos Martins, CC, a curator of relics recognized officially by the Catho­lic Church, gave a presentation on the history and theology of relics before open­ing up the “Treasures of the Church” display in Cedar Rapids and Dubuque. Above, he is holding up an Italian farm tool similar to the one used to stab St. Maria Goretti. A relic of the saint, the youngest in church history, was part of the exhibit. She is famous for forgiving her killer on her death bed. This man eventually repented while in prison due to the saint’s influence. (Photo by Dan Russo/The Witness) 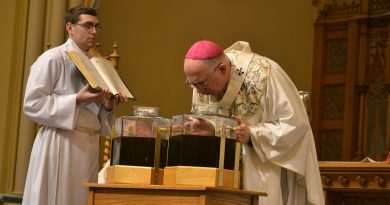