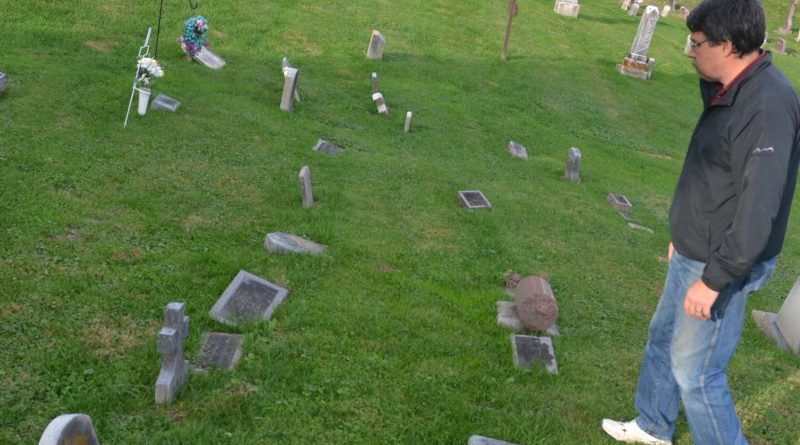 DUBUQUE — Deacon John Stierman, the manager of Mt. Calvary, the largest cemetery in the Archdiocese of Dubuque, spends much of his time around the dead helping to bury them and maintaining their final resting places on the 65-acre property in Dubuque.

Just because his day job and ministry focus on the deceased, doesn’t mean his life lacks excitement. On a typical day in his office, the pace is brisk. Recently, after taking a phone call from someone in Chicago interested in being buried at Mt. Calvary, a visitor unexpectedly popped into his office, walking past the five-foot tall statue of St. Michael the Archangel that temporarily guards his door.

The piece of art was recently refurbished as part of a restoration project and will be going back out onto the grounds soon. The woman asked for his help in identifying the gravesites of several relatives — a feat that entails pulling out very old map books and records that date back to the 1840s. After answering her questions and prompting her to make a list of names, he encouraged her to make an appointment later. As the visitor left, she couldn’t help but comment on the beautifully made angelic sentry.

“The statue gives me goose bumps,” she said of the patron saint of cemeteries. “I love St. Michael!”

“Sometimes, he’s the only sane one around here,” joked the deacon as his visitor left smiling.

With the Year of Mercy closing on Nov. 20, the archdiocese is encouraging a “work week” Nov. 7-11 for the corporal work of mercy of burying the dead. As part of our ongoing series on the works of mercy, this week The Witness is highlighting people engaged in this important effort.

Deacon Stierman is what the church traditionally called a “sexton” — one who cares for cemeteries, rings bells and digs graves. The Archdiocese of Dubuque currently has about 200 Catholic cemeteries, each one of which is managed by a local corporation with Archbishop Michael Jackels at the head. The board is typically made up of the vicar general, a local pastor, and two lay volunteers. The archdiocese acts an umbrella organization overseeing these corporations.

As auditor for the archdiocese, Penny Minnihan has visited each and every one of these sacred places during her 17 years in the position — sometimes this has required her to travel to far-flung and often beautiful places, such as St. Anthony, the world’s smallest church, or up a dirt road next to a farmer’s field.

“Even if a cemetery is closed, it is still required that a cemetery board exists,” she explained. “One of my duties is to ensure a cemetery is in compliance with regulations. We want to make sure the cemetery is financially solvent.”

Catholic cemeteries usually gain revenue by selling lots. The cemeteries care for these lots and families are required to care for headstones, mausoleums or columbariums (special resting sites for cremated remains). Once a cemetery can no longer provide revenue, it must rely on “perpetual care” funds.

“Perpetual care means that if all the sources of revenue were completely gone, state regulations say we still must maintain the cemeteries,” explained Minnihan. “We want to be good stewards.”

The church keeps track of these funds under the guidance of Rick Runde, the finance director for the archdiocese, who is also official director of Catholic cemeteries.

“A concern that I have is that we maintain sufficient funding in the cemeteries, especially in our rural areas,” said Runde, who added that donations are accepted for perpetual care.

Temple of the Holy Spirit

The Catholic Church has a long tradition of caring for the dead which rises out of its theology that we are made in the image of God and that, at baptism, the Holy Spirit begins to dwell within our bodies.

“As the temple of Christ, our bodies are sacred,” said Peggy Lovrien, director of the office of worship.

The rituals of burying the dead spring from this idea and the belief that, like Jesus, our bodies will be resurrected at the end of time to be reunited with our souls. The vigil, funeral Mass, and burial rites are oriented to our connection to the Paschal mystery.

The church prefers its members bury remains of the full body due to the reverence of the body, but cremation has been permitted since 1963. A long-standing ban on cremation for Catholics was in place for centuries due to an ancient controversy.

“The reason it wasn’t accepted in the church is because initially cremation started out as anti-resurrection, that this was a protest against the church’s teaching on the resurrection of the body,” explained Deacon Jerry Jorgensen, a member of the Metropolitan Tribunal, which administers canon law in the archdiocese. “That’s why cremation was forbidden whenever it started being forbidden in the early or late Middle Ages and why it’s been forbidden up until recent times.”

Cremation is now accepted among Cath­olics, and cemeteries like Mt. Calvary have added columbariums for “cremains” as cremated ashes are called.

“In the U.S., a full body interment versus cremation is about 50/50,” said Deacon Stierman. “For Catholics, about 30 percent get cremated.”

The church recently came out with a “clarification” on cremation, adding to an older document. It was in response to some practices with cremains that were not in keeping with Catholic beliefs, such as scattering of ashes, keeping of cremains in the home, or placing them in jewelry. More on this clarification is here: https://www.thewitnessonline.org/faithformation/q-anda-on-proper-handling-of-ashes-following-cremation/

“The church is looking at how can we treat the cremains with great reverence as we did the body,” said Lovrien.

Pat Leonard owns a funeral home business in Dubuque and has also been superintendent of Mt. Olivet Cemetery, another Catholic cemetery in Dubuque for 25 years. He says he has seen many changes over the years, including fewer people visiting of gravesites.

“I don’t see the prevalence of people visiting (the cemetery) like I used to,” said Leonard. “It’s a societal thing.”

He has also noted fewer people asking for Masses and traditional burial. Leonard does try to encourage families to have a liturgy. “They don’t see a value in it,” he said. “We have to do a little prodding. Nine times out of ten they thank us for it.”

Leonard, who serves as the president of the Iowa Funeral Director’s Association says many people may opt for cremation to reduce cost. This can be cheaper, but he believes there is value in a funeral and traditional burial. For those who cannot afford the cost of a funeral, the county does offer financial help for the poor. Sometimes, Leonard’s funeral home also absorbs the costs in some cases if a person does not qualify for assistance, seeing this as a work of mercy.

For people who lose infants, there is a program called SHARE which offers support financially and emotionally.

“When you lose an infant, we never have a cost for that,” said Leonard.

Passion for the Work

Joseph Ertl has volunteered on the cemetery board for St. Francis Xavier Basilica in Dyersville for 30 years. He donated some of his own land to help expand the cemetery and takes pride in being part of burying the dead.

“We try to keep our grave cost as reasonable as possible and we try to maintain the best cemetery we can possibly have,” he said. “You have to look at a cemetery like a hospital. You don’t turn anybody away.”

Ertl is not alone in his passion. During a recent walk of Mt. Calvary, Deacon Stier­man ran into Diego Velez, a local artist who is engaged in the refurbishment effort for the statues of the cemetery and its stations of the cross. He began the work a year and a half ago and is responsible for fixing the St. Michael statue. Before he is done, the project will add a 15th station — depicting the resurrection of Jesus.

“This is such a great project,” said Velez. “I want to get it done right.”

Caring for cemeteries, the deacon knows the value of seeing people off onto the next part of their journey. “Why do we have a cemetery?” he asked. “It’s a place for closure. Death is going to happen to all of us. This is the next great adventure in life.”

COVER PHOTO: Deacon John Stierman, sexton of Mt. Calvary Cemetery in Dubuque, walks through a section full of young children who died in the 1920-30s due to illness. (Photo by Dan Russo/The Witness) 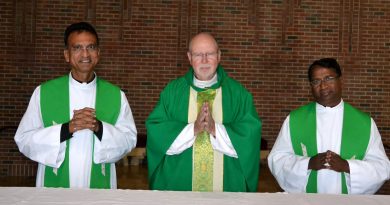 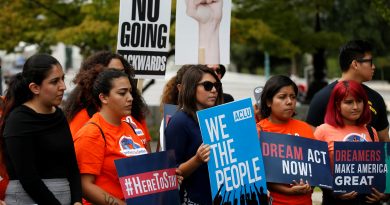 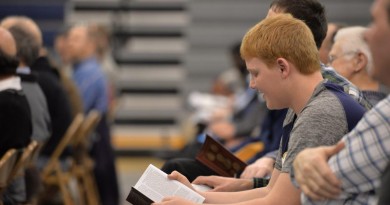