It was late August, 1983, when I returned from a year in Ketchikan, and came to apply for the secretary-accounting position at The Witness office. Sister Lois Ann Rea held that position and wished to go into parish ministry; it was the opposite for the likes o’me. Father Thomas Ralph, the editor, great conversationalist that he was, visited, asked questions about Alaska, reminisced about his first summer after ordination when he was stationed for the summer at Ossian where I was teaching 6th grade. I was about to leave, disappointed at not getting the job, when he said as a parting shot, “Make it out with Sister Lois Ann when you should begin …”

Proof reading was a part of my job. Father Edgar Kurt was archivist and interested in absolutely everything. It was evident he liked to know the priests’ changes as early as possible, however he could manage. Knowing this, Father Ralph cautioned me thus, “If you are proof reading the changes and Father Kurt comes in and stands over the desk where you are reading, close the paper; he can read upside down, and is mainly interested in …”

The bigger the print,” Father Ralph would say, “The easier it is to miss a printing error.” In reference to a time when the headlines got by with a misprint What should have read:

Smoking in the office

Though Father Ralph was a chainsmoker, it never seemed to impact on his work. On those rare occasions he would take off to visit his mother in Mason City, he would hardly be out the door when I was cleaning off his desk, washing the windows and the picture frames in his office, in an attempt to get rid of the second hand smoke. Once, the entire staff pitched in, and brought a vacuum sweeper to cleanse the carpet in his room, and we took off the drapes and sent them to the cleaners. — If Father ever noticed these things, never did he mention them!

Jokes in The Witness

Enterprising Archbishop Hennessy founded Loras College on September 8, 1873. The Witness was begun with its first issue in February, 1921, during the Roarin’ twenties. Father Thomas Conry was president of Loras and was given the task of publishing the diocesan paper. The first volumes were printed on substantial, heavy, textbook paper, the size of a magazine. — The earliest volumes were stored in the space next to the office where I worked. – And I spent time pulling early copies off the shelf and reading its stories. — I kid you not, early issues contained jokes. Examples:

(a) A man was having his eyes tested; the optician told the man to cover his right eye and read the chart; then his left eye. The man called his wife over and told her to hold his wallet, because “You never know when he’s gonna’ tell me to cover both eyes.”

(b) An Irish lady told her maid to mail this envelope, and gave her two pennies for a stamp, saying, “This is a very important envelope, so do be careful.” The maid returned, smiling, and gave the lady back her two pennies. “Didn’t you mail my letter?” she queried breathlessly. “Oh yes, mum, I most certainly did.” Then why do you give me back the two pennies for the stamp?” “Well, you see, mum, I didn’t need them – I mailed the letter in the box when no one was looking!”

After a year at a job, one knows the routine and settles in. That’s when seeing a bank statement for his parish, I asked Father Ralph if he would like me to do that for him. “Yes, I hate bookkeeping,” he responded. And I happily set to doing that once a month task. Soon I was approached with, “Would you mind doing my collection, too?” “You might as well record it, then, also.” “Why not make out the bank deposit along with it?” “And the end of the year report?”

A vigorous “Yes” to all these suggestions, as I really like bookkeeping. Eventually one final question, “Would you mind doing my personal checkbook?” And so it came to be, that I was actually the somewhat-secretary at his parishes of St. Theresa, LaMotte and Assumption, Zwingle. And I never saw either place!

I personally considered Father Ralph an “extremist” of sorts. He was a gourmet cook and had low cholesterol, anyhow. He would tell of preparing gourmet meals on Sunday evenings, and inviting a number of priests for the meal and professional conversation. Once I heard him invite a young priest to join them with the admonition, “But don’t invite me back!”

Bats out, Christmas tree in

Entering the hall on (4th) floor that was The Witness wing at the time, I heard weird sounds coming out of nowhere. It was a bat that had gotten into my wastebasket and couldn’t get out. – Some other times, bats would be flying in our corridor, pell-mell, with us chasing them, unsuccessfully. Father came in, saw the situation and said, “Close all the doors, and open the outside door at the end of the corridor, the bat will go out on its own.” A method we used more than once, after that.

Early on, Father brought his Christmas tree from his rectory, saying he didn’t have time to put it up, and he’d see more of it if I set it up in our office space. And this became a yearly ritual.

Father Ralph was equally pleased with receiving letters that agreed with his editorials as those that were not. “At least they are reading the paper,” was his response.

Bud MacFarlane was a long-time member of The Witness staff. Even when the office was in the back of the archbishop’s residence across from the library. He was typesetter when the paper was set up and printed at the Telegraph Herald, letter-by-letter. He transferred easily when the office was moved to the former Presentation Convent and became the Archdiocesan Pastoral Center.

And the Witness Publishing Company became a profit and non-profit organization. The Witness being the non-profit portion; the Composition Specialists the for profit portion of the company. It required two types of book-keeping with its dual purpose.

Sister Donalda Kehoe, OSF, served as secretary, bookkeeper and proofreader at The Witness from 1983-1997. 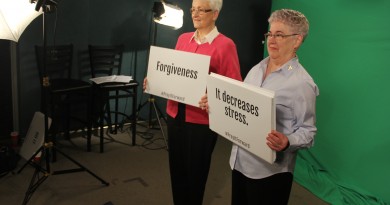