Out of the depths I cry

The Spirit dwells in you

The raising of Lazarus 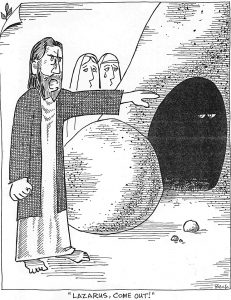 Every dramatic narrative has a tipping point, where the mounting tensions reach an intensity when they break and start moving toward the final unravelling. In traditional terminology, the rising action reaches a climax, which leads into the falling action, and eventually to the denouement.

For John’s Gospel, this tipping point is the story of the raising of Lazarus to life. In the other Gospels it is the temple cleansing that serves this purpose. But John has placed that earlier in the story (2:13-22). Here it is the Lazarus episode that prompts Jesus’ enemies to move against him (11:45-53).

The drama can be viewed through different lenses. In one that we have been using, the narrative of incarnation—the story of the word become flesh—a tension appears between the confident voice of the divine word and the troubled voice of the human Jesus. It is as if the very narrative and process of incarnation is itself threatening to come undone. On the one hand we have assurances that are offered to the reader, as well as the disciples, in 11:4, where the story is described as a lesson about God’s glory.

Or even more strikingly, after we have just heard that Jesus is profoundly troubled at the door of the tomb, he calls on God to hear him. But in v. 42 he affirms his confidence that God listens to him, while explaining that his plea was for the benefit of those nearby. And, perhaps, the reader.

This doubleness is also seen in the unfolding drama of the Lazarus story. The action occurs in three places—across the Jordan, at the gate of the town of Bethany and at the door of the tomb of Lazarus. In the first scene, two separate reasons are provided for the delay in the return to Bethany, on the outskirts of Jerusalem. One is that this will provide a lesson in the power of God to raise from the dead (11:11); another is that returning to the Jerusalem area means risking almost certain death (11:8. 15).

When they come to Bethany in the second scene, an interesting thing happens. The scene is run through twice, once with Martha (11:20-27) and once with Mary (11:32-37). The first offers a teaching of resurrection and life; the second says that Jesus wept.

John invites comparison by opening each scene with the same reproach, first by Martha, then by Mary: “Lord, if you had been here my brother would not have died” (11:21, 32). It is the difference between life and death. Eternal life is assured, but it does not exclude the trauma of death.

This doubling of scenes is a feature of John’s storytelling. Other examples would include the two days in which the Baptist announced the Lamb of God (1:29, 36), the double scene of the garden arrest (18:4-6, 7-8), as well as the two Sundays the risen Jesus appeared in the locked room (20:19-23, 24-29). We are invited to look at both sides of the story.

In the final scene, at the tomb of Lazarus, the two lenses through which we observe the action continue to operate. Again Jesus is deeply perturbed. And again he offers a word of confident assurance, thanking God for hearing him (11:42). But upon command, Lazarus leaves the tomb. In this, Jesus has in effect traded his life for that of Lazarus, since this will be the reason they make their move against him, leading to the Passion.

But already, in its way, the season of resurrection has begun. Shortly after, at a banquet at the house of Lazarus and his sisters, Mary anoints Jesus’ feet. The fragrance fills the house, erasing the memory of the “stench” of the tomb (12:3).

For reflection: What, for you, is the lesson of the Lazarus story?

Between the cliff and the crowd

Rudolph to the rescue: The triumph of an under-deer