SOLEMNITY OF THE NATIVITY OF SAINT JOHN THE BAPTIST

(MASS DURING THE DAY)

The second song of the servant

You have probed me, you know me

The birth of the Baptist 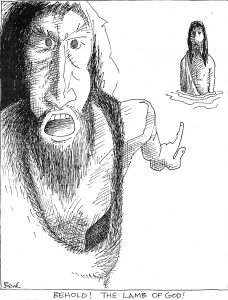 We celebrate the feast of the birth of John the Baptist at the opposite end of the year from Christmas, recalling Luke 1:36 — “And behold, Elizabeth, your relative, has also conceived a son in her old age, and this is the sixth month for her who was called barren.” The actual dates of birth are unknown of course, and tradition, conscious of the nuances of culture, has placed the births just after the solstices, perhaps to supersede ancient pagan practices. Robert Graves reminds us that in ancient Britain the Holly King, who ruled over the waning sun, began his rule on the summer solstice. The Oak King, however, ruled when the sun was waxing. On the winter solstice, people celebrated the beginning of the return of the sun. The practice seems to have been widespread in the ancient world.

Every week, the Sunday liturgy suppresses a feast on the calendar of saints, one that would otherwise be celebrated. But on some occasions, as today, the feast wins out. Usually, when we follow the Sunday cycle, the readings determine the theme of the celebration. But when we have a special feast, like today, the celebration determines the theme of the readings. So today we have a chance to consider what Scripture texts were chosen to enhance the feast.

The first reading is something of a surprise. We would expect something from the writings of Second-Isaiah (Isa 40-55), but the passages usually connected with John are Isaiah 40:3-6 (“a voice crying out in the desert”) and Isaiah 42:1-6, the first of the servant songs, quoted by the heavenly voice at Jesus’ baptism. The servant is a mysterious figure in Isaiah, but the New Testament says that Jesus is the proper fulfillment of the role.

However, the choice today is the second servant song. In this passage, the mission of the servant is redirected, turning from converting Israel to the larger world. “I will make you a light to the nations, that my salvation may reach to the ends of the earth.” This may be a clue for us.

The Gospel reading is from Luke’s account on John’s birth. We are familiar with the passage concerning Zechariah’s affliction from the time of the angel’s visitation regarding his son to be (Luke 1:20). During the entire time of Elizabeth’s pregnancy, her husband has been mute, incapable of speech. But now that the child is born, and Zechariah agrees with Elizabeth that he is to be named John, his affliction is lifted. Since John is known later as the voice crying out in the desert (Luke 3:4), perhaps Luke is hinting that Zechariah contributed something to his son as well — suffering without a voice during the time of gestation.

A large gap appears in the Gospel reading. Missing is the familiar canticle of Zechariah, commonly called the Benedictus. Perhaps another canticle would fit better. The Nunc Dimittis, uttered by Simeon in the temple, builds on the -second servant song — “… for my eyes have seen your salvation, which you prepared in sight of all the peoples, a light for revelation to the Gentiles, and glory for your people Israel” (Luke 2:31-32).

Paul, in his programmatic speech in Acts 13, begins his story of Jesus by speaking of the Baptist. He informs the inhabitants of Pisidian Antioch that he is an apostle to the Gentiles. His message concludes with significant words: “For so the Lord has commanded us, ‘I have made you a light to the Gentiles, that you may be an instrument of salvation to the ends of the earth’” (Acts 13:47). What begins with John reaches to this.

Hearing the cry of the poor