GOOD FRIDAY OF THE LORD’S PASSION

In you I take refuge

The obedience of Jesus 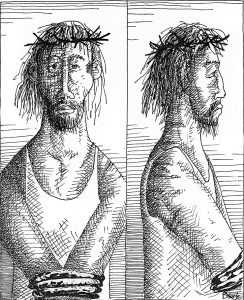 This column takes something of a departure from the usual program. While the coming Sunday is Easter, and certainly deserves attention, I thought it might be interesting to look at the readings for Good Friday. We can compare that day’s Gospel with that of Matthew, read on Palm Sunday.

First, unlike the other Gospels, which in­clude the Last Supper, John’s Gospel begins with Jesus arriving at the garden, which John does not name. Judas is waiting there with the soldiers and guards. There is no “Agony in the Garden” in this Gospel. Instead, we move right ahead with the arrest of Jesus.

As in other places in John, this event takes place twice, each scene beginning with the question of whether Jesus is the one. First, the guards, overcome, fall down when Jesus says, “I am”; then when asked again, he submits to the arresting guards. The two scenes contrast and show that Jesus’ submission is entirely intentional.

After this, the narrative shifts back and forth, in a cinematic style, between the council trial of Jesus and Peter’s denial of Jesus. One effect is apparent—it shows both events taking place in different locations but at the same time. Another effect is less apparent. The key trial events take place out of sight. When Jesus leaves the presence of Annas, to go to the court of Caiaphas for the trial, we cut away to see what is happening with Peter (Jn 18:24). When we return, we find out the trial is over, and Jesus is being sent to Pilate (18:28). At this point we do not know what he is being charged with. We discover another feature of John’s narrative—some things happen out of sight, without the reader’s knowledge, until later.

It may surprise readers to learn that the bulk of John’s Passion account features Pontius Pilate. In a series of seven scenes, Pilate moves from inside the Roman praetorium, where Jesus is being held, outside to where the Jewish leaders are gathered. And then back inside again, and so forth. Much of the action is similar to the other Gospels, but there are two long conversations between Pilate and Jesus that are only in this narrative (Jn 18:33-38; 19:8-12). Among the many things happening here, we have space for only a couple.

First, it is only when Pilate asks Jesus, “Are you a king?” that we discover what the charges are against him. These are designed to force Pilate’s hand, since he needs to act against any who might rebel against Roman authority. Second, when Pilate finds nothing to charge him with, the leaders claim he is not a “Friend of Caesar.” This was a special honor for especially loyal officials. The insinuation is that he will be reported as not so loyal if he neglects to deal with rebels against Rome who claim to be king.

Pilate’s response in the next scene is that of the crucifixion of Jesus. Much of this scene is devoted to the title on the cross, with which Pilate twits the leaders by calling Jesus “King of the Jews,” as they accused him. They do not like it, but Pilate holds that if there is no threat, then there shouldn’t be any execution. So they can’t have it both ways. Or, more briefly, “What I have written, I have written “ (19:22).

The crucifixion itself is briefly told. Jesus’ goods are accounted for (19:23-24), provision are made for his mother (26-27), he thirsts (28-29), and then he dies, his mission accomplished (30). The rest is taken up with Scriptures interpreting it, including Jesus as Paschal Lamb. Joseph of Arimathea is joined by Nicodemus, now a disciple, for the burial.

For reflection: Why do you think John neglects to mention the cruelty of crucifixion?