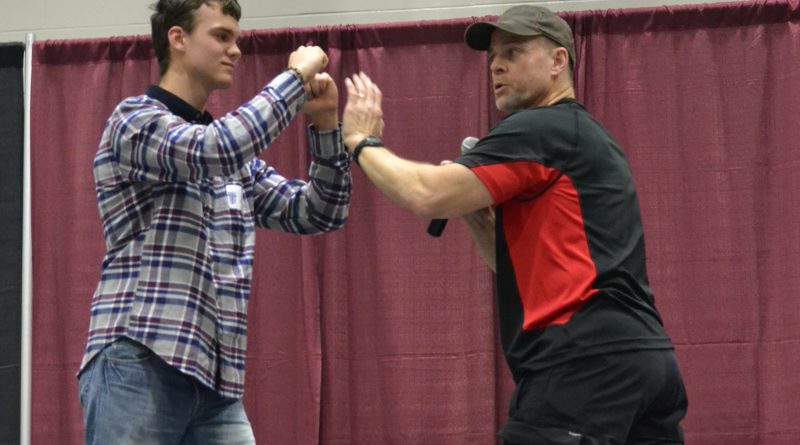 CEDAR RAPIDS — As Doug Barry held up a knife in one hand and a rosary in the other during his final talk of the day on the main stage of this year’s Archdiocesan Men’s Conference, his ongoing analogy between physical fighting and the spiritual battle people face became as sharp as it could be.

“We need to be able to physically protect ourselves and spiritually protect ourselves,” said Barry. “In the spiritual battle, the devil is coming at us, and he’s trying to get through us to our wives and our children, and we’re standing (in between). “We’ve got a couple different weapons here. Between the two of these, which of these do you think the devil fears the most? He laughs at this (knife), because where are you going to cut him?”

Barry was one of two keynote speakers at the 21st annual conference held at Xavier Catholic High School in Cedar Rapids April 1. Over 300 men attended the event organized by the Archdiocesan Men’s Fellowship. For the first time, talks —keynotes and breakout sessions, were offered in both English and Spanish. Barry, a nationally known lay Catholic speaker hosted the long running “Life onthe Rock” TV show on EWTN and now appears on another program on the same network called “Battle Ready.” His two main talks explored the role of Catholic men in their families and society.

Extending the metaphor of preparing for battle, throughout the day, Barry discussed historical examples of courage in World War II and the church approved apparitions of the Blessed Mother, which included her messages to the world to counter evil and follow Jesus. He described the Virgin Mary as gentle, but not soft, asserting that she is strong and has issued a powerful challenge to all men to pray, know their faith and put it into action.

“This battle is real,” said Barry. “(Mary) is calling us up to battle. We should be praying this rosary every day of our lives. Why? Because she said it. We need to live the faith so much that not only do we want it for ourselves, but for everybody else. The last words of the Blessed Mother in Scripture are clear as day. She says, ‘Do whatever he tells you.’ Gentleman, we are called to do what Jesus tells us. Men have a position and a place to step into that breach.”

Deacon Freddy Palacios of the Archdiocese of Chicago gave the Spanish language keynote speeches to a small group of Hispanic participants.

“The first (talk) speaks about our relationship with different cultures,” said Deacon Palacios. “How do we understand the reality of living our own faith and our own culture, how do we come together. We are all children of one God — how can we enrich the two cultures and bring them together. We have so much to give.”

Mike Schulte, president of the Archdio­cesan Men’s Fellowship, explained that the purpose of his organization is to encourage men’s groups at the parish level and to encourage fellowship through the archdiocesan-wide conferences. The decision to have a Spanish language component at the latest event was made over a year ago.

“We thought it was time to grow the family,” said Schulte. “We want to welcome (Spanish speaking Catholics) with open arms. We know it’s the start, so we knew it wasn’t going to be perfect this year. It’s just something we’re going to build on.”

Schulte said the theme of being “battle ready” was meant to energize men to take on leadership roles in their communities and in the spiritual lives of their homes. “We wanted to challenge men almost from a perspective of a warrior for Christ,” he said.

“We’re challenging men to become the best version of themselves, and go out and convert other people’s hearts.”

“It’s a needed experience for men in this world, and I want to make a difference,” said William Hunter, a participant from All Saints Parish, Cedar Rapids. “I think that anybody who would attend this could feel welcome.”

Joe Winters, a meteorologist for KCRG TV, acted as MC for the English language portion of the event.

“I don’t hide the fact that I’m Catholic,” he said. “You have to be open and honest, and I think by living out your faith — not necessarily being in their face about it — but living it out, and being willing to answer questions or step out and correct when things are seen is very important, especially for men.”

The conference’s motto was Proverbs 27:17, which compares fellowship among Christians to “iron sharpening iron.” In his closing talk, Barry did this for Xavier High School senior Bret Biermann, calling the young man up onto the stage to demonstrate a good stance and guard for self-defense. Barry then applied this to his metaphor on the spiritual life.

“We’ve got to get him in a position where he’s not going to get knocked over,” he said. “You’ve got to protect the eyes, the throat, the jaw. Spiritually, it’s very similar. We have to protect our spiritual eyesight, our soul … If we do this (self-defense training) with him every day for 5-10 minutes, it’s going to become second nature. If we pray the rosary every day … (and engage in other) spiritual training, the spiritual battle becomes second nature. It doesn’t mean we don’t get smacked around sometimes, but if we train then we can engage. The minute we neglect prayer and sacraments, the devil pokes us in the eye, throat punches us, slaps us upside the jaw, knocks us out.” 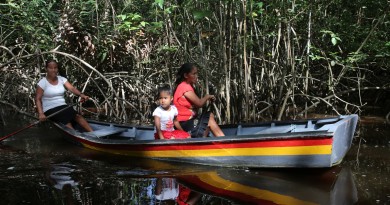 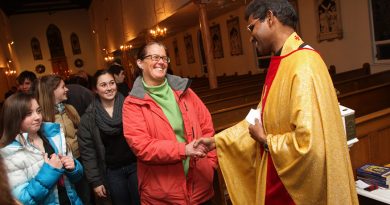 A parish of hospitality and more

Lent: A commitment to merciful hearts