Amos is invited to leave

Blessing on the Ephesians

Sent out in pairs 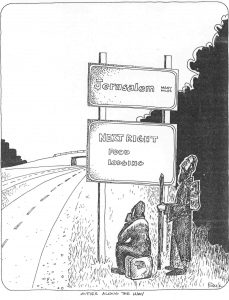 This week we hear about the sending-forth of the Twelve in pairs. The editors of the lectionary have chosen the troubles endured by the prophet Amos as an Old Testament ally to the gospel reading. Also, we are beginning a new letter of Paul—that written to the Ephesians. While we don’t say much about the epistles, generally because of concentration on the other readings, we might note that an important theme in Ephesians is the mission to the Gentiles. This is why it is chosen for reading on the feast of Epiphany.

The story of Amos at Bethel is the only biographical passage in this book, which otherwise consists of the prophecies of Amos. Here we find out that his daytime job is as a farm worker. He is not a “professional” prophet. However, today we see him having an experience typical of the true prophets. He is being told to leave Bethel, the ancient shrine whose name translates “house of God.” Bethel is north of Jerusalem. The distance is not far, but it is in a different territory in those days—in the northern kingdom of Israel, not the southern kingdom of Judah. Amos is from Judah, south of Jerusalem. He is begin accused of being an outside agitator, to use a contemporary label. The real reason, of course, is that they do not want to hear what he has to say. What he has to say is in the rest of the book.

The gospel reading about the mission of the Twelve follows upon Jesus’ rejection at Nazareth. A close reading shows that it consists of a summoning at the beginning (6:7), and a departure in answer to that summons at the end (6:12-13). Sent with authority over unclean spirits, they preach repentance and expel demons, and anoint the sick.

In between, we have two sets of instructions. The first is given in indirect discourse (6:8-9), and concerns how they are to prepare. No food, sack, money; sandals, but not a second tunic. They will be utterly dependent upon those they travel among.

The second part of the instructions (vv. 10-11) is in direct quotes. It is about the hospitality of their hosts. They are told to stay at the first house they enter. If they do not receive a welcome, they are to shake the dust from their feet. I presume that if hospitality requires attending to the foot-dusty sandal-wearing traveler (see Luke 7:44), then this gesture of shaking off the dust is a way of accusing them of inhospitality. Look, it is saying, there is still dust on my feet!

The disciples do not return until 6:30, where they are called “apostles,” which means “those sent.” This is the only place Mark uses the word, and presumably it is because they were just sent out, and now they return to report in.

Mark prefers the term “the Twelve,” as in 3:14. That passage tells of their being called, for the purpose, literally, “to be with him and to be sent out.” They have been with him for three chapters, in what seems to be a kind of internship. And now that he is rejected at Nazareth, they are being sent out.

We saw that they do not return until 6:30. In the meantime, Mark tells the story of the death of John the Baptist. Note that this doesn’t happen while they are gone. It happened in the past. It is just being told now while we wait for the apostles to return. Which is to say, it is a rhetorical flourish on Mark’s part, allowing us to have a sense of their time away. It would be especially effective, I suspect, when the gospels were read aloud.

For reflection: Why should apostles be sent out?

The power of prayer and ritual inside our helplessness

Gathering of the nations