Life on earth is drudgery

The Lord heals the brokenhearted

All things to all people 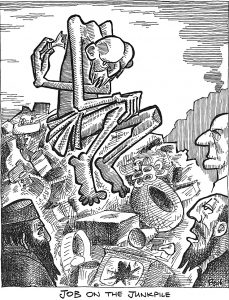 As Mark tells the story, the first day of Jesus’ public ministry comes to an end. It began with an exorcism of “unclean spirits” in the synagogue of Capernaum. And now it is followed by the visit to the house of Peter, where Jesus brings Peter’s mother-in-law back to full health. In response, she gratefully returns to her duties as hostess, no longer embarrassed by her failure to extend hospitality.

The townsfolk had gathered outside, for it was the Sabbath, and they were not to enter the house. But after sunset, he cured many and cast out demons. The next morning, rising early, he went off to pray in a quiet place. But Peter followed him, asking him to return. “Everyone is looking for you.” But Jesus said that he must go to the nearby villages and preach there also. And as we will see, he does more than preach, since there were many in need of healing as well.

The Gospel begins, then, with throngs of people seeking help. While we are accustomed to thinking of this as representing the human condition, and the example of Job in the first reading encourages this line of thought, more recently, archaeological and historical findings have fleshed out the picture. There is a political dimension as well.

The Roman occupation had stressed the availability of resources. The rise of cities, promoted by the Roman client kings, such as Herod Antipas of Galilee, exhausted avail-able supplies. Sepphoris, a city near Nazareth unmentioned in the Gospels but revealed by archaeological explorations, is an example. The traditional village life was disrupted to feed the cities. Land was expropriated to form large estate farms, since our kind of refrigerated transport was lacking, food supplies had to be nearby. Coinage appeared for similar reasons. Taxes had to find a medium that would go to distant Rome. Advertising the image of Caesar was a bonus.

Former small landowners found themselves working for large estates, sometimes even on the land they used to own. Social banditry of the Robin Hood variety appeared in Galilee. Some resorted to militant uprising—the “false messiahs” of the Gospels. But they were put down ruthlessly by the Roman occupying army.

We also find prophetic types, such as Theudas (Acts 5:36), who symbolically acted out a resistance to the imperial occupation, taking to the desert, or the Jordan River, to signal a new beginning of Israel. It was time for God to start things over again. These too were summarily dealt with by the Roman army. John the Baptist seems to be an example of these “signs prophets.” Like Theudas, he was beheaded, according to the Gospels.

Jesus begins his public life with John the Baptist. But he leaves the desert and returns to the villages. There he addresses the troubles of the people in a more direct way. Scholars such as Richard Horsley have proposed that an effect of depressed conditions is a pervasive social malaise—a tendency toward physical sickness that can accompany loss of hope. Professionals who deal with drug epidemics or social disorientation among veterans, for instance, find something similar.

The ministry of Jesus is not simply to individuals, though it is that. He also is reviving communities. He brings back the excluded, such as the leper, aiding the village as well. He teaches forgiveness, repairing the relationships upon which their common life depends.

Jesus heals, attending to their illnesses, and he preaches attending to their depressed hopes. And later, moving from dealing with symptoms to addressing their causes, he will head to Jerusalem and confront those in charge. But that is later in the story.

For reflection: Jesus begins in the villages of Galilee. Isn’t that also part of the meaning of his story?

A big win for the little guy