The apostles face the council

For you have rescued me

The throng around the throne 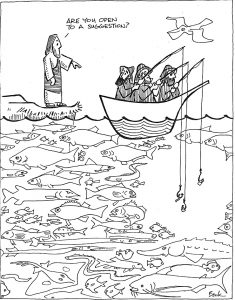 It is after the events in Jerusalem, and the disciples are back in Galilee. Peter decides to go fishing, and the others join him. Peter is notably prominent in the Easter stories. Some theorize that his name, “Rock (upon which the church is built),” is largely earned in his efforts after Easter to summon the scattered disciples, so that they happen to be in place when the Lord appears.

A friend of mine calls this event on the shore of Galilee “the First Breakfast” — in contrast to the Last Supper, which marked the departure of the apostles from the Gospel story. There is some insight in that description, insofar as reparations are made in their encounter with the risen Christ. Now they are gathered, and Peter has a chance to repair the damage of his denials. Three times Jesus asks, “Do you love me?” and three times Peter affirms his love. Though he does get somewhat testy toward the end.

Some have suggested that this is not a response to the denials, because the numbers are different. In this Gospel, Peter denies Jesus twice, not three times. But this too can be part of the forgiveness, which exceeds the failure.

This story is one of those that commentators call nature miracles. Scholars sort the miracles of Jesus into two kinds, the other being healing stories, in which impaired persons are restored to health or life. In Mark’s Gospel, by my count, there are 13 healing stories and five nature miracles. Mark’s Gospel features the deeds of Jesus more than the teachings, as in the other Gospels.

In John’s Gospel, there are four each of healings and nature miracles. The healing accounts are the royal official’s son (John 4), the paralytic (John 5), the blind man (John 9) and the raising of Lazarus (John 11).

The nature miracles are the wedding at Cana (John 2), the multiplication of the loaves (John 6) followed by the storm on the lake (also John 6), and, finally, this story, the miraculous catch of fish (John 21).

I mention this because there are certain common features to the nature miracles — at least those of the Cana wine jars, the loaves and the catch of fish. In each case, a scarcity is noted as a problem. In each case, there is no definite gesture on Jesus’ part, as there is in healing stories, when he touches or commands. Here, he simply gives instructions to those helping and voila! the problem is solved.

And, furthermore, in each case the miraculous solution not only erases the loss, supplying the missing good, but always does so in abundance. And the stories make that point by listing the amounts. The six wine jars at Cana is far beyond the need. Someone estimated it was equivalent to 600 of our bottles of wine. The miracle of the loaves produces 12 baskets of leftover fragments. And the miraculous catch is not only breaking the nets, but John provides a count. It consists of 153 large fish.

This specific numbering of the fish has produced no end of speculation. But as Raymond Brown points out in his commentary, no one has really figured it out. Let us say for the present that it does contribute to the practice of registering the amounts. In that way, it serves to demonstrate the excessive bounty, as in all these stories.

The emphasis on excessive abundance is an important part of the meaning of the stories, and so it is here, as well. The Resurrection story is about new life, unexpected new life. And one of the ways this is represented is the experience of sheer plenty in the catch of fish.

For reflection: In each of these stories, meals are involved. That must mean something.