Diatribe against the leadership

Through Christ we are drawn back

The Twelve return from mission 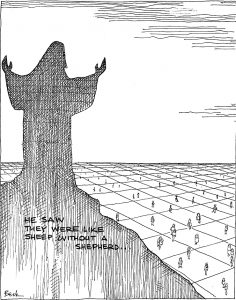 In Chapter 36 of Jeremiah we read about a scroll on which Jeremiah collected his prophecies to that date, at the request of the Lord. It was read before the nobles and then before the king. The king famously cut it off, piece by piece, as it was read and dropped the pieces in the fire. His opinion of the messages was clear.

Jeremiah was compelled to recreate -the scroll and add some additional oracles. The reconstructed scroll is the basis for Chapters 1-25 in the book of Jeremiah. The following chapters involve other things, especially biographical reports on Jeremiah’s activities as recorded by Baruch, his secretary of sorts, and others.

The conclusion of the “scroll” is in Jeremiah 21-25, including a review of the kingship as Jeremiah has known it. A common metaphor for kingship is the shepherd. Usually, in the prophetic writings, it is invoked in criticism, as with Jeremiah’s charge against the kings.

Today’s reading is the conclusion of that review, condemning the shepherds of Judah. But there is more than that going on here. Up to now, Jeremiah has been naming the kings. But when he comes to the current king on the throne, he does not name him. That could be out of delicacy or maybe caution. But maybe not, when we see what he is doing.

The king’s name is Zedekiah. He will be the last to grace the throne of Judah. His name translates as “the Lord (Yahweh) is justice.” When we look at the final verses in today’s selection, we see Jeremiah making a play on the name of the king. The gist of its thrust is that someday there will be a king who will actually deserve the name that the present king (unjustly) bears. So it turns out Jeremiah has not avoided naming the king after all. In fact, he satirizes it.

Later on, we encounter another passage that is very similar to this one. In Jeremiah 33:14-16 an almost exact duplicate of this passage appears. There are some significant differences, however. The introduction of “Jerusalem” into the second passage is a clue. Even more suggestive is the change in pronouns. Whereas the first example (today’s) ends with the line, “This is the name they give him: ‘The LORD our justice,’” the later version reads, “This is the name they give her: ‘The LORD our justice.’” In other words, the name will not be given to the king but rather to the city itself.

Add to that the addition of another line at the beginning. The original version has:

“See, days are coming — oracle of the Lord —

when I will raise up a righteous branch for David.”

But the later version replaces that with this:

“The days are coming — oracle of the Lord —

In those days, at that time, I will make a just shoot spring up for David.”

A note in the New American Bible tells us that this passage in Chapter 33 of the Hebrew Bible is not in the Greek translation, the Septuagint. It is probably the work of a later writer who applied Jeremiah’s prophecies to the situation after the exile. “The hope for an eternal Davidic dynasty (vv. 14–17; cf. 2 Sam 7:11–16) and for a perpetual priesthood and sacrificial system (v. 18) was not realized after the exile.”

For the New Testament writers, the promise to David, left unfulfilled in Judea after the exile, was to be fulfilled in the person of Jesus of Nazareth. That would seem to be the reason for the inclusion of the passage from Jeremiah in today’s liturgy, that, and the shepherd imagery.

For reflection: How is Jesus a shepherd?