FEAST OF THE TRANSFIGURATION OF THE LORD

The Son of Man coming on the clouds

The Lord is king; the clouds surround him

This is my Son, my beloved, with whom I am well pleased

Jesus is transfigured on the mountain 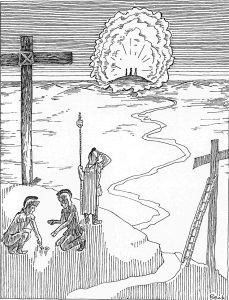 The account of the Transfiguration comes a little past midway in the Gospel narrative. The healings in the villages of Galilee are in the past; the long road to Jerusalem has just begun. The Galilee section concludes with the recognition on Peter’s part of Jesus’ messianic role. “Who do people say I am?” “You are the Messiah.”

But now the road to Jerusalem introduces a new and more sobering theme—the coming Passion and Death of Jesus. It begins with a renewal of the call by the lake. Then, it was, “ Come, follow me.” Now, however, it is, “If you would be my follower, deny yourself, take up your cross, and come follow me.” One recognizes the special pertinence this has for Peter, who when the time comes, in the courtyard of the high priest, gets the directive mixed up. Instead, he denies that he knows the one inside, the one who is taking up his cross.

But shortly after the journey to the city begins, after the exchange with Peter, Jesus takes the three more prominent members of the Twelve, Peter, James, and John, up a high mountain, where he is transfigured.

The account looks in two directions. First of all, it looks back to the first days of the gospel story. Thus, the voice from heaven, first heard at the baptism of Jesus, returns to repeat its message: “This is my beloved Son, with whom I am well pleased.” This is further recognition that we are in a new part of the narrative, requiring a new revelation to carry us forward.

In this regard, we find an added command: “Listen to him.” And with that, we know that there is more to come, and this account of Transfiguration looks forward toward the end of the story. On the road to Jerusalem the focus changes from healing to lessons, and the lessons are about what it means to be a disciples of the Servant.

In response to Peter’s recognition of the Messiah, Jesus delivered some dark news. “From that time on, Jesus began to show his disciples that he must go to Jerusalem and suffer greatly from the elders, the chief priests, and the scribes, and be killed and on the third day be raised” (Matt 16:21). This time on the mountain of Transfiguration, however, offers a vision that prepares the disciples, and the reader, for what is to come, by looking beyond the death to the resurrection. “And he was transfigured before them; his face shone like the sun and his clothes became white as light.”

This language will be echoed in the story of the empty tomb of Easter. “An angel of the Lord descended from heaven, approached, rolled back the stone, and sat upon it. His appearance was like lightning and his clothing was white as snow” (Matt 28:2-3). In the Transfiguration we have a preview of Easter, taking us beyond the dark times of Passion and Death. The disciples fell prostrate, very much afraid. But the brightness, like the sun, dispels the darkness, and promises a newness greater than the loss.

Furthermore, Jesus appears with two others, identified as Moses and Elijah. These also were known to have spent time on the mountain, namely Mount Sinai. With Moses, it was the mount of covenant, the compact between God and Israel. For Elijah, it was a time for renewing that compact in an era of its eclipse. So there is promise here as well for a renewal of covenant, a new era, beyond the difficulties that lay ahead.

For reflection: What are some ways to interpret the Transfiguration for our own day?

My father was a wandering Aramean