On the Feast of Weeks

Renew the face of the earth

The Gifts of the Spirit

His Spirit that dwells in you

The Advocate, the Holy Spirit

Pentecost was a Jewish feast before it was Christian. The Feast of Weeks, or Shavaot (related to the word “Sabbath”), occurred a “week of weeks” after Passover. Those 49 days were functionally equivalent to the 50 of “Pentecost” (i.e., the “50th (day)”). The Jewish feast marked the wheat harvest, as well as commemorating the presentation of the Torah to Israel on Mount Sinai. For Christians, it memorializes a similar beginning — the birthday of the church. 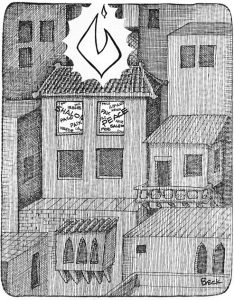 Luke’s account of the event in Acts 2:1-11 has layers. Consistent with his usual practice, Luke requires a passage to do many things. For one, the list of nations anticipates the coming story of Acts, where the message will go out to the many nations. Meanwhile, the Spirit-given gift of enthusiastic speech is used to signal the many languages into which the message will find itself going forth.

Scholars report that the Roman culture looked askance at this spirited kind of reli­gious expression. They preferred their religions to remain sober and orderly. One of the difficulties that Paul ran into was this disdain for enthusiastic expressions of faith. In writing to the Corinthians he urges restraint, without denying the validity of the Spirit language.

This aspect adds a little extra twist to Luke’s account in Acts. Luke has in mind a reversal of the effects of what happened at the Tower of Babel, in Genesis 11:1-9. This makes sense, since the dispersion of peoples pictured in Genesis is now seen to be coming to a gathering, instead.

However, the full sense of what Luke is doing is obscured by a matter of translations. He is working from the Greek, not the Hebrew. About three centuries before the New Testament was being written, Jewish scholars in Alexandria in Egypt produced a Greek translation of the Hebrew Bible, for the benefit of the many Jewish communities around the ancient world. They shared the common language, Greek. They were no longer so familiar with Hebrew, by now a dead language. Luke, writing for Gentiles, used this version of the Bible in his composition of the gospel and Acts.

This factor is noticeable in his Pentecost story in Acts 2:1-11, which shares much of the vocabulary of the Greek Old Testament version of the Tower story in Genesis. But most interesting is the fact that in the Greek Bible the tower is not known as “Babel,” as in the Hebrew Bible. We rather like the name Babel, which evokes Babylon, as well as the English word, “babble.” And the Bible likes word play as much as we do.

Rather than “Babel,” the Greek Bible calls it the tower of “Confusion.” In all the New Testament, this Greek word for “confusion” appears only in Acts. And its first appearance is right here in the Pentecost story (Acts 2:6).

The other instances involve (a) the confusion in Damascus when Paul started preaching about Jesus (9:22), (b) the riot in Ephesus, when the pagan idol dealers were upset at Paul’s competition (19:29, 32), and (c) the riot he caused when he returned to Jerusalem (21:27, 31). What these have in common is that the confusion always appears among those opposed to the Christian mission.

For those in Roman society who preferred a more sober order of things, it appears that it is not the Christians with their gift of enthusiastic speech that are confused. Far from it, in fact. Instead, they have the remedy for it. The confusion is on entirely the other side. The history that follows from the Tower of “Confusion” — or “Babel” — is now reversed.

For reflection: How have you tended to think of Pentecost?

The power of ritual