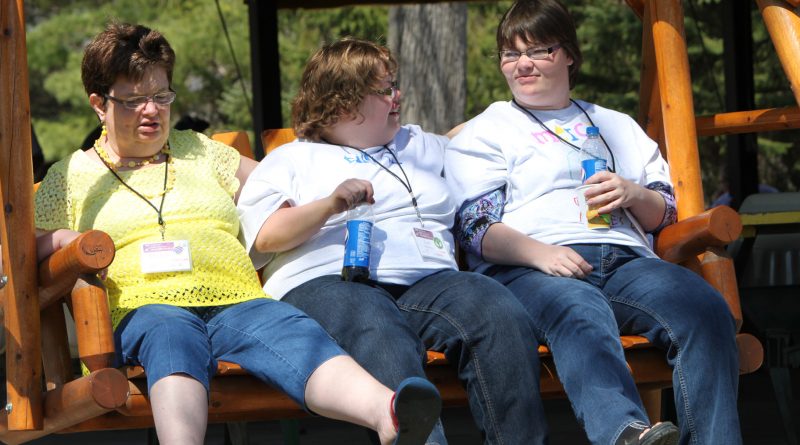 Around the Archdiocese Stewardship
May 5, 2016 Jill Kruse-Domeyer

SHERRILL — The weather was warm and the sun was shining as adults with disabilities and volunteers from around the archdiocese came together for a weekend retreat at Camp Albrecht Acres outside of Sherrill on April 16 and 17.

“We lucked out with the weather. It was a beautiful spring weekend,” Mindy Hart, the director of the Office of Persons with Disabilities for the Archdiocese of Dubuque, which sponsors the annual retreat, said regarding this year’s event.

The retreat for adults with disabilities is a weekend for faith and sharing and building friendships. Participants have the opportunity to listen to speakers, make crafts, sing, dance, and when the weather is favorable, like it was this year, participate in a variety of outdoor activities at the 40-acre camp designed especially for people with special needs. The retreat offers participants the chance to partake in the sacrament of reconciliation, and every retreat weekend comes to a close with Sunday afternoon Mass.

The theme for this year’s retreat, “Be Mercy! Live Mercy! Share Mercy!” was chosen to tie into the Jubilee Year of Mercy currently being celebrated by the church worldwide. Retreat participants created “blessing bags” which were stuffed full of toiletries and other basic items and were given to the Sisters of St. Francis for distribution to people in need.

Seventy-two adults with disabilities went on this year’s archdiocesan retreat weekend. “Retreatants always have a good time,” Hart said. “They look forward to it.” She said a woman named Gidget, who went on this year’s retreat and has gone on others in the past, summarized the feelings of many of the participants when she told her, “I’m glad I come to the retreats. I have so much fun.”

Also attending this year’s retreat were more than 100 volunteers, including a number of nursing students from Clarke University who aided participants with special medical needs. Other volunteers helped by providing meals. Hart said two of the volunteers were a couple who met each other when both were volunteering at this same retreat 30 years ago. They continue to come back to help with the event and now bring their children with them.

Hart, who has led the Office of Persons with Disabilities for the past four years, works by herself out of Waverly, but said she is grateful for the support she receives from others, including Jim Betzner, the coordinator of retreats/renewal days for the archdiocese, and a group of 15 volunteers known as the “CORE Team,” who help organize events for the office throughout the year. “They are an amazing group,” Hart said, “They feel called to do this. They see this as their ministry. None of this would be possible without them.”

As director, Hart works extensively with parishes and faith formation programs in the archdiocese to ensure that people with disabilities are fully included in their respective faith communities, that facilities are physically accessible to them and that they are shown hospitality and afforded the same opportunities for formation in the faith as everyone else. She also works closely with Catholic schools helping them navigate issues surrounding inclusion in the classroom.

Calling it “a true right to life issue,” Hart said she thinks it’s important that the archdiocese have a ministry that focuses on persons with disabilities. She said that in their 1978 pastoral statement, the U.S. bishops called for the full inclusion of persons with disabilities into the life of the church, and the work her office does strives to make that inclusion a reality. “We’re called to reach out to the ‘least of my people,’ and that is what this ministry is about,” she said.

Hart is chairperson of the Archdio­cesan Committee in Service with People with Disabilities, a committee that Deacon Steve MacDonald has been a member of for the past 35 years.

The deacon and his wife, Kathy, recently helped organize a service project for the students at Holy Ghost School that gave them the opportunity to help residents at Hills & Dales, a Dubuque nonprofit that provides services to children and young adults with severe mental and physical disabilities.

Though now retired, Deacon MacDonald was a teacher at Holy Ghost for many years and still has ties to the school. When the school’s liturgy committee, chaired by music teacher Patti Steines, began collecting ideas earlier this year on how to get students involved in the Year of Mercy, Deacon MacDonald and his wife suggested a project with Hills & Dales.

Because Steve leads the Spiritual Enrichment Program at Hills & Dales, and Kathy assists with teaching religion classes for the program, the couple knew that a new building addition at Hills & Dales had created a blank white wall that was in need of decorating. They proposed that students from Holy Ghost create pictures to donate to decorate the space.

Holy Ghost students have a history of volunteering at Hills & Dales. In the past they have played games with and read books to residents and have organized sing-a-longs and put on plays and skits for them. The MacDonalds thought that with the school’s already established connection to Hills & Dales, the picture-decorating project was a natural fit for the Year of Mercy.

The school agreed, so during the months of March and April, preschool through fifth grade students at Holy Ghost created pictures to decorate the new multi-purpose room at Hills & Dales. They made about 150 works of art. “The Holy Ghost students had a great deal of fun painting the pictures,” Deacon MacDonald said. “They learned that helping others is not just the right thing to do, it can also be very enjoyable.”

The pictures were presented to Hills & Dales at a ceremony the evening of April 26. Two Holy Ghost School families, the Hefels and the Kirbys, were chosen to represent the school and present the pictures to Deacon MacDonald and the 20 residents who are part of Hills & Dale’s Spiritual Enrichment Program. Each participant of the program has a volunteer religion teacher who works with them each week and those volunteers were also present. At the end of the ceremony, the pictures were hung up and the previously bare wall was filled with color.

Holy Ghost is not the only school where students have forged a connection with Hills & Dales. For the past three years during Lent, students from Mazzuchelli Middle School in Dubuque have presented a mime of the passion of Jesus for youth at Hills & Dales. It has become a tradition that after the mime, students from both groups spend time with one another at a meet-and-greet. This spring, Mazzuchelli students also held a dance to raise money for Hills & Dales, and students asked if they could invite the Hills & Dales residents to join them for the event.

Deacon MacDonald said that during his many years in ministry to people with disabilities, he has often witnessed apprehension on the part of new visitors or new volunteers when they are first introduced to a group of individuals with physical and developmental disabilities. But, he said, initial uneasiness quickly fades after they discover that people with disabilities have more in common with them than not.

“The need for friends, to be accepted, to be recognized, to be appreciated, to be loved and to love, are universal human traits. The students soon see all of this and discover that people with disabilities have many abilities and enjoy many of the same activities as they do,” Deacon MacDonald said. “And when this happens, friendships bloom.”

Photo: (L to r) Retreatants Michelle, Lori and Amanda enjoy the weather during a break at the annual retreat for persons with disabilities in the archdiocese April 16-17 at Camp Albrecht Acres in Sherrill. Photo courtesy Joan Thill. 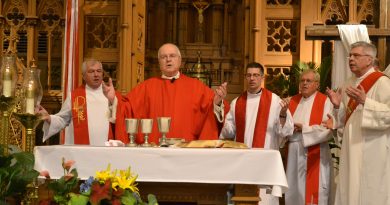 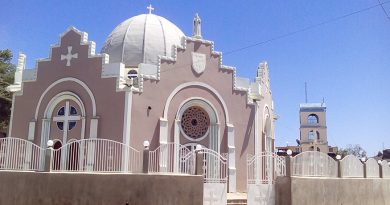 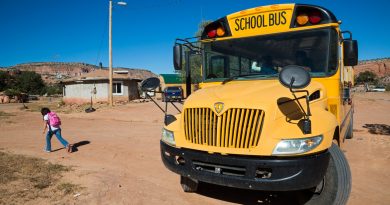