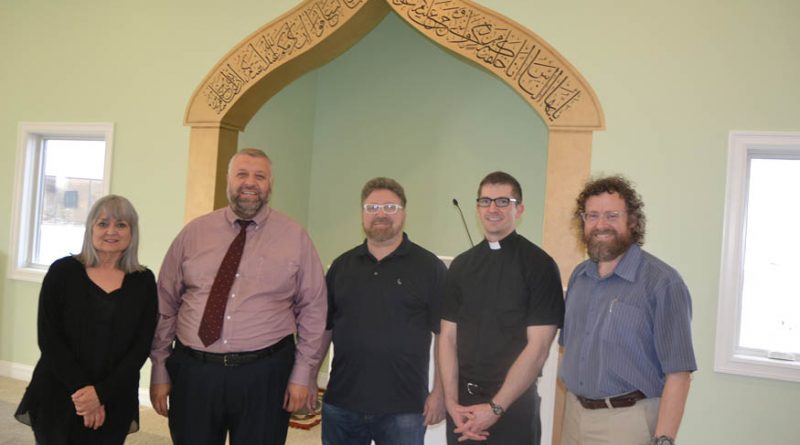 Around the Archdiocese
May 4, 2018 Dan Russo

DUBUQUE — Donna Slade, a professional artist who runs her own business, had never set foot in a mosque before beginning work on the intricate calligraphy in Arabic that now decorates the arch above the central point in the worship space at the Tri-State Islamic Center in Dubuque.

“I really enjoyed it,” she said of the project. “It was great working with them.”

Slade, a Catholic who belongs to Nativity Parish, collaborated with Fayez Alasmary, an Arabic-speaking college ­stu­dent who is a member of the mosque, and Dr. Adib Kassas, a member of the advisory board who also serves as an imam, to perfect the curved lettering that expresses a verse from the Qur’an, the Muslim holy book.

The artwork was a gift from the Catholic parishes of Dubuque to the Islamic community. Muslims have been present in the city for years, with the first permanent worship space on Richie Drive opening in December 2016.

“This is a gift from them expressing their welcome to us, and expressing that they are interested in building rela­tion­ship and cooperating together,” said Dr. Kassas, a physician who came to Dubuque from Syria about 13 years ago. “I really feel it’s a great gesture for them. Muslims have loved this gesture, accepted it and welcomed it.”

The art project was completed just recently. Slade finished the painting part of it over about seven days. On April 25, she placed a translation of the verse in English, created by a local sign maker, on a glass frame near the entrance of the building. The next day, many of the people most directly involved in the effort gathered by the mihrab, the key point in the mosque over which the calligraphy is displayed, to pose for a photo. Aref Khatib, president of the Islamic Center, explained that the gift has a deep significance for both communities.

“It means to me brining everyone together and realizing we should not be discriminating and we should not be judging one another,” said Khatib. “That’s God’s job, not our job … When you look at the universe, everything is different color and different shapes, just like human beings are and that’s the beauty of Allah’s creation. We should embrace the diversity.”

The idea for the gift came from Father Alan Dietzenbach, associate pastor at St. Raphael Cathedral and St. Patrick Parishes, while the building was under construction.

“I’ve always been inspired by my confirmation saint, St. Francis of Assisi who during the height of the Crusades, crossed Christian and Muslim battle lines to meet the Sultan and seek to be an instrument of peace and understanding in the midst of conflict,” reflected Father Dietzenbach. “When we look back at the history of Christianity and Islam we tend to focus on the times of contention and overlook all the times when these two religions coexisted and faithful Christians and Muslims worked and peacefully lived side-by-side.”

Father Dietzenbach believes we can learn from historical instances of outreach and cooperation between the two religions.

“In this time of much confrontation, the message of St. Francis is just as challenging for us today,” asserted Father Dietz­enbach. “So, when I read in the newspaper that the Muslim community in Dubuque, was a building a new Islamic Center, I brought the idea of gift as a sign of care and support to the other priests in town. The support for the project was overwhelmingly positive with no resistance to the idea. Thanks to the relationships built by Dr. (John) Eby through his work with the Children of Abraham we were happy to make the idea a reality and overjoyed that the Muslim community accepted our gift.”

Eby, a Loras College history professor is a member of the cathedral parish.

Through his involvement on the board of Children of Abraham, an organization that encourages dialogue between Jews, Christians and Muslims, he had the connections that helped facilitate the process that led to the gift.

“This is a great example of how to love your neighbor as yourself and to show hospitality and inclusion,” said Eby. “An important concept in Islam is ‘ihsan,’” Eby said. “It means to beautify your actions and beautify the world. Not only is this (art) beautifying this space, it’s literally taking this action of hospitality and making it the most beautiful expression of hospitality.”

Just as sacred art like stained glass windows or statues have a special place in Christian churches, the artistic representation of Muslim scripture through calligraphy is regularly seen in mosques worldwide. The verse painted in the Dubuque mosque is Sura 39:14. Its English translation is:

“O People. We have created you from a male and a female and made you into branches of humanity and different gatherings into nations so that you may come to know each other. Behold the most honored among you in the eye of God is the most deeply conscious of Him. Truly, God is All-Knowing, All-Aware.”

Kassas called the Catholic community’s gift “an example and an application of this verse.”

“What this passage talks about is that we all come from one origin,” he said. “People divide themselves into groups and isolate themselves from others, thinking that they are better than them, but the truth is, God said we have made you into that kind of division to get to know one another.”

Kassas said God’s purpose for making us different was not to cause conflict.

“The whole idea of different grouping (is) God wants each group to learn from the others and teach them,” he said. “The most honored among you is the most God conscious or the one who is centering his life around God.”

On the wall to the left of the arch is a small plaque that identifies the calligraphy as a gift from the Catholic parishes. Father Dietzenbach hopes the art will serve as a lasting symbol of cooperation between the two groups.

“In the handful of times I have been to Children of Abraham I have been amazed at our commonalities and I have to admit that some of the most beautiful theological reflections I have ever heard about Mary, the Mother of Jesus, have come from faithful Muslims,” said Father Dietzenbach. “I hope that this gift is a sign of solidarity and love and a reminder that religious freedom is a right we hold together as we strive to make our own community a place of peace, understanding, and kinship.”

Cover photo: (Left to right): Artist Donna Slade; Dr. Adib Kassas, acting imam; Aref Khatib, president of the Tri-State Islamic Center; Father Alan Dietzenbach; and Dr. John Eby of Loras College pose in front of the arch which was enhanced by the gift of calligraphy expressing a verse from Islamic scripture. The art was a gift from the Catholic parishes of Dubuque. (Photo by Dan Russo/The Witness) 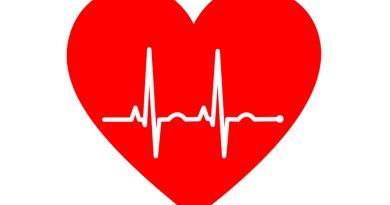 Priest reflects on surviving 25 years after a heart transplant 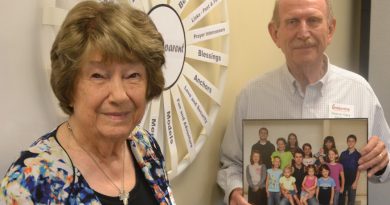 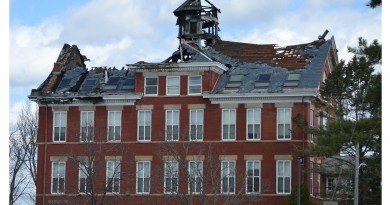 Loras students safe after fire breaks out at residence hall