The law of the Lord is perfect

But we proclaim Christ crucified 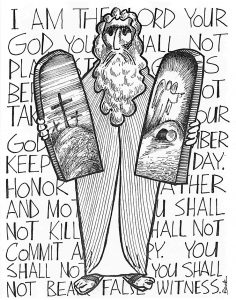 Thus far in this Lent we have seen the covenants of Noah and Abraham. And now we turn to Moses. The Ten Commandments are familiar to most Christians. For some, it represents the entire Old Testament, although there are many more chapters than this one. For instance, this is the passage often selected for promotion in public places, such as courthouse lawns.

Still, there is some truth in the intuition that it is centrally placed in the Bible. The commandments are the centerpiece of the Moses covenant on Mount Sinai. This covenant differs from others. Unlike like that of Abraham, for instance, the Moses covenant involves an entire people, not an individual. Moses is not a party to the agreement—he is the facilitator.

The story of this covenant covers chapters 19-24 in Exodus. After the Israelites arrive at Sinai, Moses is the one who goes up the mountain to meet with God. When he comes down, in Exodus 25, the agreement is sealed between the people and God. “Everything the Lord has said we will do.” This is the vote that ratifies the compact.

The terms of the covenant are given in the chapters just prior, with the main terms given in Exodus 20, and the more detailed laws in chapters 21-23. The main list of laws is what we call the Ten Commandments. They are the basic terms of the covenant that is foundational to the faith community of Israel. It is in that regard that they can be presented as representing the Old Testament.

There are a number of conclusions we can draw. First, the relationship between God and Israel is presented as a free choice on both sides. With their neighbors in the Bronze Age, their god was a part of the given world. The god was a national divinity, who came with the land. For instance, Marduk, the god of Babylon, personified the nation, a part of the complex of national valves that made Babylonia what it was. When Babylon went to war, the king was viewed as the embodiment of Marduk.

In contrast, God Yahweh is presented as a free God, who entered into an agreement with this group of exploited slaves. He enabled their escape, and he himself was free. Upon reaching Sinai, Yahweh and -Israel made a compact, and at that time he promised that they also would have a land. That too was part of the agreement. All in all, the covenant of Moses came to represent liberation for a free Israel.

Because of its role as the fundamental compact that establishes Israel as a nation and people, the Moses covenant lies behind much of the rest of the Old Testament. For instance, the prophets were continually judging Israel—and especially its leaders—in terms of their lack of adherence to the terms of the covenant. The prophets often adopted the role of God’s lawyers, taking Israel to court for breach of contract.

And when the kingship collapsed and they were taken into exile, the writers and thinkers among the people interpreted the cause as failure on Israel’s part. The “Deuteronomic History”— a continuous account from Deuteronomy through Joshua, Judges, 1 and 2 Samuel, and 1 and 2 Kings—interprets their history as a willful abandonment of their side of the agreement. It was not God who failed them; rather, they had failed God. The free agreement had its downside; it could be the occasion for diminishment as well as liberty.

We often think of the Ten Commandments as authoritarian demands of an unrelenting God. It is helpful to realize that in context this is a part of a story of liberation.

For reflection: Any thoughts on why the Ten Commandments can be said to summarize the law?

Jesus is transfigured on the mountain