We are always courageous 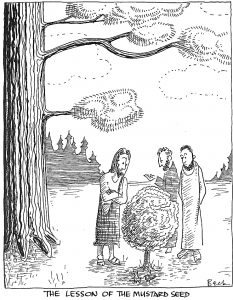 Today’s Gospel features the double parables of the seed growing of -itself and the mustard seed. They are a matched set, of sorts. But Matthew and Luke pair the mustard seed with the parable of the leaven — not in Mark.

The readings for today illustrates something about Jesus’ parables. They often, perhaps most of the time, play upon earlier story traditions. For instance, the parable of the vineyard tenants (Mark 12:1-12) builds upon Isaiah’s “song of the vineyard” (Isa 5:1-7).

So it is with the parable of the mustard seed. It has a heritage in the stories of Israel. Today’s first reading is a part of that tradition. But it already has a precedent. This too is found in the Bible. In certain passages in the prophets, the great empires of the day were compared to the mighty cedars of Lebanon, the fabulous forests in the mountains north of Israel. The trees of Lebanon were the most impressive trees in their experience and served as metaphors, much as sequoias do for us.

The prophet Ezekiel compares the kingdom of Assyria, an empire that doomed the northern kingdom of Israel, to a cedar of Lebanon.

“In its branches nested all the birds of the sky;

Under its boughs all the wild animals gave birth,

Ezekiel goes on to remark how the empire was doomed and disappeared from history.

The prophet Daniel is said to have been consulted by King Nebuchadnezzar in Babylon (the empire that defeated Assyria), for the king had a dream: “I saw a tree of great height at the center of the earth. It was large and strong, with its top touching the heavens, and it could be seen to the ends of the earth. Its leaves were beautiful, its fruit abundant, providing food for all. Under it the wild beasts found shade, in its branches the birds of the air nested; all flesh ate of it.” (Dan 4:7-9). But in the dream the tree is cut down, leaving only a stump. Daniel interprets this to be a warning to the king that his reign will end if he does not repent.

You will have noticed that a signature phrase in these examples is that “the birds of the air will nest in its branches.” It symbolizes the protection the kingdom provides its citizens. However, it turns out to be provisional.

Today’s first reading, from Ezekiel, builds on that tradition, but it features Israel as the mighty empire, not Assyria or Babylon. The prophet speaks of a time in the future, when a branch is clipped from the top of one of Lebanon’s cedars, and planted on Mount Zion, the temple mount. He dreams of a day when it will be Israel’s turn to dominate the world.

It shall put forth branches and bear fruit,

and become a majestic cedar.

Birds of every kind shall dwell beneath it,

But look what Jesus does with this story tradition. No longer is the kingdom compared to the mighty cedar. Rather, he builds his metaphor on the mustard plant, an annual that grows wild to the consternation of farmers. But it does, in fact, provide shade for birds. I suspect that a bit of humor is peeking through here. Or at least irony. Jesus’ “kingdom” is not a mighty empire, but simply the circle of care in which God’s work is being carried forward. Jesus’ “kingdom” is one of service and nonviolent power, not domination. And the birds of the air — any who are in need — are the better for it.

For reflection: Could have Jesus had a wry sense of humor? What do you think?

Reticence and secrecy as virtue