My God will fully supply my needs

The parable of the wedding feast 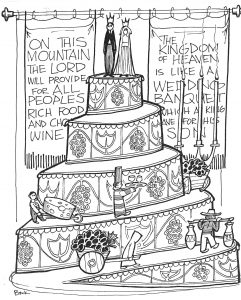 The first reading is a classic poem from Isaiah, depicting the vision of a grand feast “on this mountain.” It speaks to the final gathering and makes a point that “all peoples” will be invited. In addition to the motif of the final gathering as a fine feast, other images flesh out the picture. The “veil that veils all peoples” brings to mind the veil worn at funerals, which now removed means that death itself is destroyed. All tears will be wiped away. And, finally, the reproach of Israel—probably referring to domination by foreign powers—will be removed.

“This mountain” may be Zion, the Temple Mount, as in Isaiah 2:2-5. Or it may be a generic mountain overlooking the nations, gathered in the final days.

Isaiah’s feast leads into the parable of the wedding feast, in Matthew 22. This parable is found, in a slightly different version, in Luke 14:15-24. Matthew’s version has its own distinctive features. For one, it has been interwoven with another story, about war against another city (22:7). This unsettles the unity of the parable, since the narrative suggests that the war intervened between the first and second round of invitations. Meanwhile, what about the wedding and the feast?

Most commentators today view the destruction of the city, in v. 7, as a reference to the destruction of Jerusalem. This would constitute a clear indication that the Gospel of Matthew was written after 70 A.D., when the city and Temple were destroyed by the Roman army. Whether this is to be taken further, as an indication that the events of 70 A.D. were a punishment from God, remains doubtful. It does, however, situate Matthew’s writing in the turbulent years after the destruction, when Judaism was in turmoil, and the Jesus movement (not quite yet “Christianity”) was competing with the neo-rabbinic movement within Judaism. Matthew makes the case for the Jesus move­ment as the future form of Judaism. Events would prove otherwise.

Another notable difference in Matthew’s version of the parable is the added ending, about one invitee who lacked the proper wedding garment. The story assumes that one was available, and the man simply chose not to wear it. What are we to make of this?

A common, and somewhat convenient, interpretation in the past has been that the parable dramatizes the Old Testament versus the New Testament, with the added parable standing as a warning not to repeat the errors of the past. In this reading, the first group invited would be the Jews, and the second group, the Christian Gentiles. Those who propose such a scenario would also point to the destruction of the city in v. 7. This reading is “convenient” in that it serves to justify a subsequent history of Christian anti-Semitism, somehow presented as a virtue, with deadly results in the 20th century.

However, this reading runs into difficulties once we consider that Gentiles do not enter the focus of the Gospel until the final verses. It is then that the apostles are sent out to all the nations (Matt 28:16-20). And, as mentioned earlier, Matthew’s concern involved competing groups within Judaism, following the fall of Jerusalem and the loss of the Temple. Perhaps the added ending is a warning to those of the Jesus movement who are tempted to claim God’s preference over those they oppose. After all, in the second invitation, the servants included “all they found, bad and good alike.”

Nevertheless, the lesson seems to hold—do not continue to maintain the attitude of presumption that lost an earlier generation. Repentance is needed, for the new group as well as the former, however those groups may be configured.

For reflection: What is the lesson of the parable of the wedding feast, as you read it?

The Lord is king of glory