God will raise up a prophet

If today you hear his voice …

Paul on marriage in the meantime

A synagogue in Capernaum 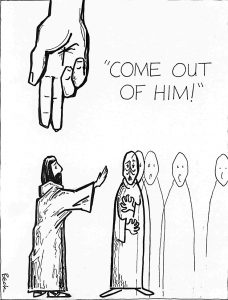 The different evangelists choose different ways to launch the narrative of Jesus’ public life. For Matthew, it is the Sermon on the Mount (Matthew 5-7); for Luke it is the account of Jesus’ reading the scroll in the synagogue of Nazareth (Luke 4:16-30). John gives us the wedding at Cana (John 2:1-12). For Mark, it is today’s story of the exorcism of a demon in the synagogue of Capernaum. The account is richer, with more levels, than we might first expect. It introduces many themes that will continue throughout the following narrative.

At an immediate level, Jesus’ conflict with the authorities is introduced: “The people were astonished at his teaching, for he taught them as one having authority and not as the scribes” (1:22). In the course of the Gospel story, Jesus encounters different opposition to his work in different areas—the Pharisees in the villages and towns; and when he comes to Jerusalem, the chief priests and elders. These are distinct groups. What ties them together for Mark’s narrative are the scribes, who appear in both groups. So we are notified this early in the story that he will meet opposition from among the establishment.

At a deeper level, we have the opposition of the demons, here called “unclean spirits.” Mark uses that designation three times in this story and frequently afterward. It is not as though he doesn’t know the word “demon,” since he uses it elsewhere (1:32, 34, 39, for instance). No, he is using a special vocabulary borrowed from Jewish ritual, which contrasts the holy and the unclean. Though at opposite ends of the spectrum, each was viewed as beyond the zone of normal existence and requiring ritual quarantine. Access to the Holy of Holies was strictly limited. Lepers, on the other hand, were banished from the community.

In Mark’s Gospel, this is applied to the spirit world, with the “unclean -spirits” standing in opposition to the “holy -Spirit,” which is associated with Jesus (1:8, 10, 12). This area of contrast reaches a moment of sharp conflict in Mark 3:12-30, when some scribes come up from Jerusalem and accuse Jesus of casting out demons by the prince of demons. After arguing that a kingdom divided against itself cannot stand, Jesus concludes his re-marks with some pointed words: “But whoever blasphemes against the holy Spirit will never have forgiveness, but is guilty of an everlasting sin.” For they had said, “He has an unclean spirit.” The implication is that the conflict that animates Mark’s narrative has a deeper level. Whereas Jesus has the Holy Spirit, his opponents are in allegiance to unclean spirits.

This opposition is also reflected in the shape of Mark’s narrative. This exorcism in Capernaum, which begins the story of Jesus’ mission, finds a parallel at the end of that mission, in the “cleansing” of the Temple. Jesus’ campaign takes him from one to the other. There are many similarities—among them, attempts to trap him in speech (2:1-28; 12:1-34); language of wines and vines (2:22; 12:1-12); and a decision to “destroy” him (3:6; 11:18). In other words, Jesus is considered to be a threat, and the deadly opposition continues from the first chapter right up to the end.

In our liturgical exposure to the Gospels, we tend to focus on the story at hand and lose sight of the larger narrative. However, the evangelists devoted considerable time and effort toward that larger narrative. This is especially true of Mark, the first to construct the story.

For reflection: How do you imagine the larger story of Jesus?

Notice: A book signing of my book, “Jesus and His Enemies: Narrative Conflict in the Four Gospels,” will be Feb. 6 (4-5 p.m.), in the Loras College Alumni Center, Ballroom A. All are welcome.

The rich man and Lazarus