The Council of Jerusalem meets

Let all the nations praise you

Twelve gates in that city

The Advocate will teach you

As we come closer to Pentecost, we hear of the “Advocate,” what we used to call the Paraclete, referring to the Holy Spirit. Jesus, at the Last Supper in John’s Gospel, promises an Advocate to act on behalf of the Church after he has returned to the Father. 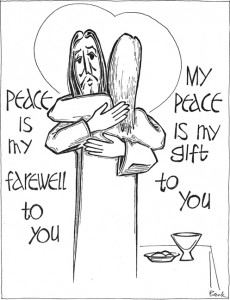 “Paraclete” is a literal rendering of the Greek term in this Gospel, parakletos. A primary meaning for the word would be something like “defense attorney.” The dictionary says “one who pleads another’s cause before a judge, a pleader, counsel for defense, legal assistant; an advocate.” Secondary meanings include: one who intercedes on behalf of another, a helper, an assistant, one who gives aid, a comforter. In English we have to choose one word to cover all these meanings, and “Advocate” turns out to be the word. It will do, although it is somewhat abstract and impersonal. On the other hand, “Paraclete” is simply mysterious.

In the reading from Acts, we find ourselves halfway through that book. The Pentecost gathering in the upper room, which began the narrative of Acts, has now grown into the Apostolic Council in Jerusalem, making decisions and directing the larger mission of the Church. In the meantime, things have happened and circumstances changed. Peter, in an encounter with the centurion Cornelius (Acts 10), has received a vision that proclaims the food laws of Judaism not applicable to Gentile converts. In addition, Barnabas and Paul have initiated a mission to the Gentile cities of Asia Minor (Acts 13-14), without requiring circumcision for that population. Now the Jerusalem Council invites Peter, as well as Paul and Barnabas, to testify to their experiences. The result is the decision that we have for today’s first reading.

The Council declares a wider freedom, with certain exceptions: ‘It is the decision of the Holy Spirit and of us not to place on you any burden beyond these necessities, namely, to abstain from meat sacrificed to idols, from blood, from meats of strangled animals, and from unlawful marriage.’

What are we to make of this? One answer is to be found in the experience of mixed communities, both Jews and Gentiles, but now Christians as well. Certain lifelong practices are not overthrown easily. I have friends, for instance, who have been vegetarians for decades, and can no longer stomach the very thought of eating meat. Which is to say, the Gentiles in the community should respect the sensibilities of the Jewish members. Paul struggles with these issues in I Corinthians 8-10, and it is clear that it is not an easy matter to solve.

The second reading, from Revelation, takes us to the next to last chapter in the Bible. Here the Scriptures conclude with a vision of the redeemed community as the New Jerusalem, its twelve gates and its missing temple. No temple is needed, since the temple was to represent God’s presence on earth, and now we are in the direct and actual presence of God. The twelve gates represent the full community, under the symbolism of the twelve tribes of Israel, much as the 144,000 did earlier, in chapter seven.

This quick tour of church history, from its birth in the upper room of Pentecost, through the first Council, to the New Jerusalem, might be seen as a preparation for the events to come, as Pentecost itself looms nearer.

For reflection: In what ways would you see the Spirit as “Paraclete” in the church today?

Our need to pray

A State of the Union address for the poor and vulnerable