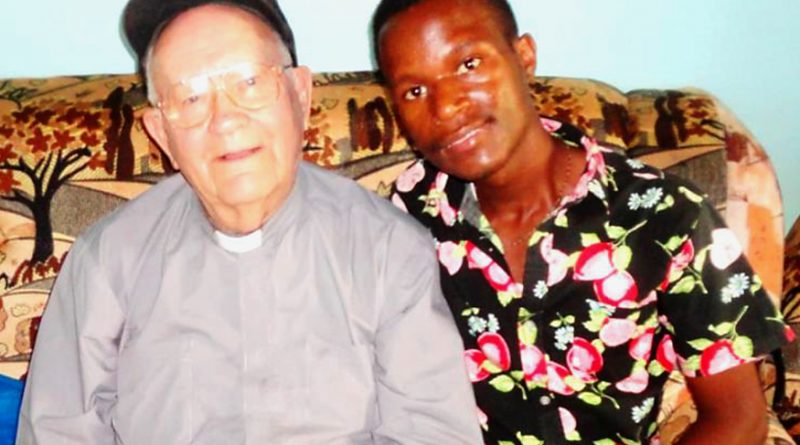 NDOLELEJI, Tanzania — While an eighth-grader at Nativity Parish school in Dubuque, Father John Lange was captivated by a Maryknoll Missionaries magazine that sat on a windowsill in his classroom.

This Catholic religious order tends to the spiritual and physical needs of the poor and suffering worldwide. Reading about the exploits of Maryknoll priests and brothers in some of the most far-flung
regions of the globe enkindled in the young man a desire to become a foreign missionary. The positive influence of clergy here in the Archdiocese of Dubuque led this son of John and Cecilia Roediger Lange to discern his vocation as a priest. Not long after being ordained in 1958, Father Lange embarked on a great adventure by boat for his first post in Africa. Now, over 50 years later, at the tender age of 88 years young, he is still actively serving. With the help of Iowa donors, both small and large, including from Nativity Parish, he has been able to accomplish much good for the glory of God.

He has  brought aid to the poor and sick in the slums of Nairobi, Kenya. He has also served in Dar es Salaam, Tanzania, and many other places, focusing on building schools and providing clean drinking water through well projects, among other endeavors.

Father Lange is currently serving at Cath­olic parishes in Mwanhuzi and Ndoleleji, Tanzania, with a number of women religious and a fellow Maryknoll priest. The Witness was able to conduct an interview with Father Lange recently, during which he reflected on his adventurous life and work. What follows are excerpts from that interview.

Witness: What attracted you to your vocation?

Fr. Lange: I credit my desire to become a priest to the influence of Father Francis Friedl. He taught us religion in seventh and eighth grades. Father Robert Vogl, who taught us Latin at Loras Academy, was also a great influence.

Witness: Can you tell me a bit about the period when you first started as a missionary in Africa – Was it tough to adjust?

Fr. Lange: I had some culture shock when I first arrived in Tanzania, Africa, but it was lessened by the fact that I lived with fellow Maryknoll Missionaries. Learning the language was a stress. You concentrate 100 percent in hearing and in talking. I got the hives so bad that my feet swelled and it was hard to put on my shoes.

Fr. Lange: I have worked with the poor all my 52 years in Tanzania and Kenya. The farmers in rural Tanzania are subsistence farmers, most of them have not two ounces of reserve money. When a child gets sick or needs school fees they have to hunt for help from relatives or the missionary. It seems to be much easier and faster to go to the missionary. In Nairobi, I worked in the industrial slums. I had a program of visiting the sick and destitute together with chosen health workers. We helped about 50 people a month to get medical care in four dispensaries and five hospitals. I have developed a great admiration for the poor. They keep smiling through things that would crumble me. They are tremendously hospitable and easy to meet. When you go to an outstation as a complete stranger you feel completely relaxed and at home. You can make easy conversation after one second.

Witness: Can you explain the role Iowa donors play in your ministry and what you’re working on now?

Fr. Lange: I am grateful to Father James Miller and the people of Nativity for their faithful support. I have always had projects that cost a lot of money. I lived in Nairobi for 21 years. I helped foster many water projects in Kenya. Most of them were boreholes that cost around $50,000 to get started. The drilling, which goes down from 100 yards to 350 yards, cost about $25,000 on the average, and then another $25,000 was needed to set up a generator or connection to the electric supply system, which was often far away. Included in that last $25,000 were expenses for miles of piping, plastic or steel, and also the construction of a tower and water tank so that the water can flow by gravity to the stations where people sell the water for a very low price to cover their expenses. I also have sponsored around 60 students in high schools or colleges or universities or trade schools for the past 25 years. Each year the cost of that has been around $70,000. Here back now in Tanzania, I have not been involved in water projects because the water from boreholes has a high amount of alkali. I have helped about 30 outstations build churches. I offer them 5 to 1. If they collect $1,000 on their own, I add $5,000.  Now I am paying for the   construction of a high school which will be able to hold 500 students. The cost of that will be about $900,000. We are now putting on the roof.

Witness: What kind of reaction do you get from people there being a foreigner and a missionary?

Fr. Lange: The people here spoil me with their respect and kindness. In the very beginning of independence around 1962, some of the politicians made ­brownie points by ridiculing and talking us down. But that is completely gone now. Where ever you go, to the bank, post office or government office, you are treated much better that the average citizen provided you respect them.

Witness: What advice would you give to people who want to evangelize based on your experience as a missionary?

Fr. Lange: I did not do a lot of proselytizing here in Africa. I guess the parishioners did that in their own simple ways. I think loving acts of interest and concern are the things that bring people to the church.

Father Lange wished to thank all of the donors, big and small, who have supported the Maryknolls’ work over the years. To assist Father Lange, people can mail donations to Maryknoll Fathers, Maryknoll, N.Y. 10545-0302 with a letter indicating that the check should go to the mission account of Father Lange. For more information, email kengineer@maryknoll.org.

Father John Lange (left) is shown in 2018 with Celestine Moreno, who is an aspirant to join the Maryknoll Missionaries. Father Lange supports his studies at Kampala University in Dar es Salaam. The student is one of many who has received financial assistance from the priest through the donations he receives. (Contributed photos) 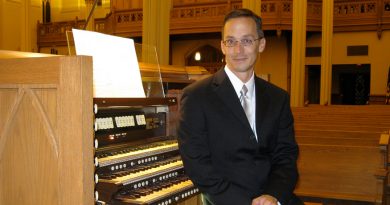 Personal reflection: A trip to England reinforces the ‘why’ in Lessons and Carols

Reflecting on the church’s teaching about immigration