Gathering of the nations

The case for disciplining

Enter by the narrow gate 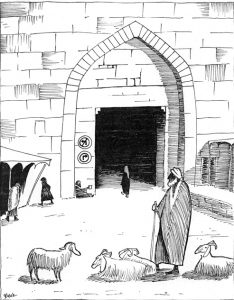 Jesus continues on his way to Jerusalem, with a large entourage. Someone from the crowd calls to him: Will only a few be saved? Jesus’ response begins with a warning to enter by the narrow gate. But before long we find him saying that people will come into the Kingdom of God from all corners of the globe. So—is the gate narrow, or is it wide open?

It helps to look at the background of Luke’s gospel if we want to see the sense behind Jesus’ words. In the deep background, first of all, we find a divided Jewish vision in the resettlement in Judea after the Babylonian exile. During the Exile, certain prophets kept the tradition of Isaiah alive. The anonymous prophet we call “Second-Isaiah” (Isa 40-55) explained Israel’s removal from the land into exile as an invitation to witness to the larger world the faith of the one God.

When the Exile ended, in 539 B.C., another prophet, “Third-Isaiah” (Isa 56- 66), brought the dream back home. Today’s first reading is an example of that prophet’s call to a wider vision.

But back home the vision met resistance from another school of thought more concerned about survival, and inclined toward closing ranks. In this regard, certain practices, or identity markers, were highlighted. Food laws, circumcision, rules against marriage with outsiders, all came to be identified with true Judaism, and the Isaian dream to open to the larger world was put on the back-burner.

If we fast forward to Luke’s gospel, we see this evangelist calling on that forgotten dream to invite outsiders into the fold. Luke shows Jesus reading from the scroll of Isaiah in the Nazareth synagogue, to be­gin his ministry (Luke 4:16-30). Luke knew that this would send a signal to Luke’s readers.

Who are those readers? Luke explicitly addresses the work to a certain Theophilus, whose name literally means “God-lover.” The name evokes a certain class of believers, not Jews, but Gentiles who were fellow-travelers of Judaism. They were com­monly called “God-fearers” (“fear” in the sense of reverence), or “God-worshippers.” No longer pagans, they believed in the one God, and read the Bible.

On ancient plaques fronting synagogues, God-fearers are named as friends and supporters of the Jewish community. They are also mentioned by Luke, most frequently in Acts—in particular the centurion Cornelius (Acts 10:2, 22, 35), but also Lydia (16:14), a certain Titius Justus (18:6), as well as various unnamed persons (13:50; 17:4, 17). In Luke’s gospel, another centurion is described in the classic role of the God-fearer (Luke 7:1-8), something that is really evident when we compare Matthew’s version of the same story (Matt 8:5-13).

Appealing to an authentic but ignored Isaian tradition, Luke invites Gentile readers to become followers of Jesus, and in that way providing them entry into the story of God’s people. It is a way into the Jewish story, and is not intended to replace Judaism with Christianity. That would come, with many unfortunate consequences, but it is not part of Luke’s program.

In today’s gospel, this dynamic is playing out. Two doors are before them—the narrow door of identity markers, and the door open to the world, invoking the Isaian tradition of the “light to the Gentiles.”

For reflection: What does Luke mean by repentance, given his examples?

The king on the cross