The parched land will bloom

As the patient farmer waits for rain

Tell John what you hear and see 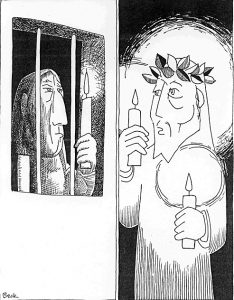 In Matthew’s Gospel, John the Baptist is introduced to us with his urgent message: “Repent, for the kingdom of heaven is at hand” (3:2). Later, Jesus begins his own mission with the same words exactly (4:17). We are to understand that at the beginning Jesus was in close step with John.

But that would change. John stays in the desert, baptizing in the Jordan, evoking the early days of Israel, signaling the need for another beginning. But Jesus leaves the desert for the villages, where he devotes his efforts to renewal and healing, both individuals and their village life.

This difference is indicated by the imagery of this Sunday and last. Last week we saw the tree of Jesse, the family tree of the royal family of David, reduced to a stump. We saw John with his axe, metaphorically de­foliating the land. The image of calling to account was that of turning forests into deserts. Today we see that imagery reversed.

Time has passed since the events of last week. John has been arrested and is now in prison. His strident message caught the attention of the authorities. While the Gospels single out John’s criticism of Herod’s marriage as the reason for his imprisonment, historical records of the day also mention the threat that he represented to those in places of authority, and that this also was a reason for his arrest.

John’s message was one of urgency. The change will happen now. Prepare. The winnowing fork is ready for the harvest. The axe is in hand. The judgment is at the door.

As the Gospel proceeds, however, Matthew shows Jesus deferring the time of judgment. In the meantime comes a time of healing. So John, expecting changes to be immediate, sends a message to ask of Jesus. He had baptized him, and had identified him as the one to bring about the change he so longed for, and which he announced as imminent. But now he asks, “Are you the one who is to come?” We can imagine him wondering when the changes are to begin. Where is the axe?

Jesus answers with passages from Isaiah. They speak of turning deserts into forests, just the opposite of that of John. The liturgy has selected the most prominent of these for our first reading. It speaks of Judah’s return from exile in Babylon as a healing and a greening. In Isaiah’s imagery, God will provide a swift road back, straight across the desert, and it will be a green belt, an uninterrupted oasis to support the returning people. They will be restored and renewed. Images of healing accompany those of nature. The healing will be social as well as individual.

So Jesus answers John, image for image. Without denying John’s urgency, or his message, he defends his own program of renewal and healing throughout the villages of Galilee.

In another of his nature metaphors, the Parable of the Weeds and Wheat, Jesus will speak to the matter of the coming judgment (13:36-43). We discover that he has adjusted John’s timeline. He speaks of the judgment in terms of harvest time. It is moved to the end of the season, to the end times. And its exact date is unknown.

Furthermore, he makes it clear that they are not to uproot the weeds, since they may take the wheat with them. That is, they are not to be making the judgment, for that is God’s work. But they are to rest in the confidence that things are in God’s hands, and God knows what he is doing. They are to attend to the growth.

For reflection: “Advent” means “coming.” What do the Scripture passages today say about that coming, and the One who Comes?

Come to set the earth on fire