The book of the law is not distant

Turn to the Lord in your need

Firstborn of creation, firstborn from the dead 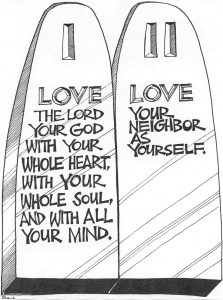 On the journey to Jerusalem Jesus engages with three distinct groups — disciples, opponents, and crowds. Today we see the beginning of the second of these, as Jesus encounters a “scholar of the law.” In this part of the Gospel narrative, these law experts appear more frequently, providing legal assistance to the Pharisees who question Jesus.

This one raises the question about which is the greatest commandment. In the other Gospels — Matthew 22:34-40; Mark 14:28-34 — this episode appears in the final week of Jesus’ life, as they try to trap him in his speech. Luke, however, tells the story here, at the beginning of the journey. It hints that this is will be an agenda for the entire journey, with his opponents trying to trap him in his speech.

At this point, Jesus introduces a topic that has not been explicitly mentioned thus far — the law. Jesus himself brings up the theme of the law, with the implication that the law itself is on trial. “What is written in the law? How do you read it?” In this Gospel, the other person, not Jesus, provides the answer, reciting the passage about the great commandment.

But it does not stop there. This in turn leads to the lawyer’s question, “And who is my neighbor?” It seems at first like this is a lawyerly question, trying to limit the scope of the requirement, to make it less difficult to comply with. But the question is legitimate, and was a matter of considerable dispute in Jewish circles at the time.

The verse cited, Leviticus 19:18, specifies that the neighbor refers to members of “your own people,” though later in the same chapter it expands this to the stranger who lives in the land (Lev 19:33-34). The Greek Bible favored by Luke’s readers limits this commandment to the “proselyte,” or convert to Judaism. Other answers current at the time among different parties of the Pharisees range from the narrower views similar to the Essenes at Qumran, where only their own community members were admitted as neighbors, to more expansive views. These would include among the neighbors other Jews, or maybe even converts to Judaism. And some would even include the non-Jewish foreigners living in their midst. There was a range of opinions, and the scholar of the law debating with Jesus had a legitimate question.

The striking answer of Jesus is the parable of the Good Samaritan. It is neither the priest nor the Levite who are commended in the parable, but rather the Samaritan, commonly considered less than fully observant of the requirements of the law. And the lesson is not about who might be considered as the neighbor in need, but rather who proves to be a neighbor to the one in need.

The implications of this answer are unlikely to go unnoticed by Luke’s non-Jewish reader. The question of the identity of the neighbor includes those who are called foreigners in the story of the ten lepers (17:18). In moving beyond borders, to the foreign Samaritan, Jesus opens the circle to include the outsider.

NB: I should mention that I lifted most of this column from my book on Luke and Acts of the Apostles, just published. Most of the book is about the shape and intent of the double account of these Luke-Acts, considered as a single sweep of narrative. However, once in awhile it stops to take a look at a single story, like that of Jesus and the scholar of the law, and the Good Samaritan. The book is “A Light to the Centurions: Reading Luke–Acts in the Empire” (Eugene, OR: Wipf & Stock, June 2019).

For reflection: We’re still debating about who qualifies as “neighbor.”

Lessons for humanity from an inspiring pope on his 100th birthday