At the Procession with Palms

Jesus in the garden

My God, why have you abandoned me? 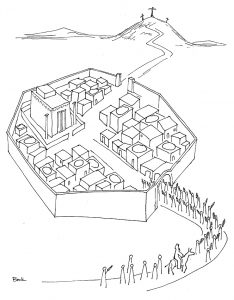 This Sunday we participate in Mark’s drama of the passion and death of Jesus. The triumphal entry into the city begins the liturgy, just as it begins the final week of Jesus’ life in Mark’s account. We then skip over the three intervening days to pick up the story on the following Thursday.

Each of these moments has its drama. However, there is a difference between the liturgical drama and that of the Gospel. As Mark tells it, the entry into the city culminates in the temple cleansing, which in this Gospel takes place on the following day (11:12-19). For Mark, the cleansing is a deliberate action that is planned on Sunday and performed on Monday.

This missing piece is important, since the temple action is what motivates his opponents against Jesus—a decision that leads directly into the passion (11:18). At this time they are unable to reach him because of the favorable opinion of the crowds. But after a few days the cooperation of Judas leads them to him. So if we were to tell the story in its fullness we would include the temple cleansing. The liturgy, however, is more directed toward the intensity rather than the motivation of the action.

We still are left with plenty of drama. The entry completes a narrative arc that began with Jesus’ first public action, in the synagogue of Capernaum (Mark 2:21-28). There too, with the expulsion of demons, we have the cleansing of a holy place. But now the action has moved to the center of their world, to the temple itself. Throughout the intervening time, Jesus has been welcoming the lost and excluded. Now that comes to a completion, as “my house shall be a house of prayer for all people” (11:17). The emphasis in Mark is on the “for all people.”

As for the Passion account, many threads trace through the drama. But let’s look at one of them. Mark sets up his account by moving from Judas Iscariot, who is described as “one of the Twelve,” to Joseph of Arimathea, identified as a member of the Jewish council, who has just arranged for Jesus’ death. They belong to opposite camps, but what they share in common is the fact that they cooperate with the other side. Judas, “one of the Twelve” (14:10), connives with the council against Jesus, while Joseph, “a distinguished member of the council” (15:43), works to retrieve Jesus’ body for the disciples.

A key word that ties them together is paradidomi, or “hand over”—usually translated “betray” when Judas is involved. In a series of moves, Jesus is removed an increasing distance from his home group, as the passion account deepens. Judas is the first to hand him over, to the council (14:41-42). They in turn hand him over to Pilate (15:1), who hands him over to the soldiers who are assigned to execute him (15:12). At this point, Jesus is as far from home as possible. His outcry, with Psalm 22, is memorable—“My God, My God, why have you abandoned me?” The series of physical movements underlines this sense of abandonment.

When Joseph of Arimathea comes to retrieve Jesus’ body, after his death, he is shown retracing each step of the way. He inquires of Pilate, who in turn asks the centurion in charge of the crucifixion. The centurion reports to Pilate, and Pilate approves Joseph’s action (15:43-45).

However, the body does not reach the circle of disciples, for when they arrive to anoint him, he is no longer there. He is risen.

For reflection: Can we find ourselves in different persons in the Passion?

Learning from Lazarus: what this Bible story can teach us about preparing for death

John’s vision of the Son of Man