The cry of the oppressed

The Lord hears the cry of the poor

A Pharisee and a tax collector 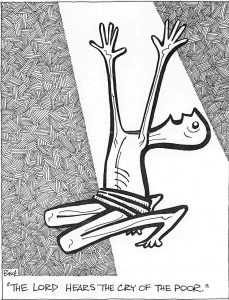 Since June 30, when we returned to the Ordinary Time from the special seasons of Lent and Easter, we have been on the road with Jesus, his disciples, the Pharisees, and the crowds. We are now nearing the end of Luke’s long journey narrative, which will reach Jerusalem in the next chapter of this Gospel. Today’s parable of the Pharisee and the Tax Collector have a feeling of summarizing the lessons along the way.

Interestingly, each has a contrasting character who illustrates the other side of the question. The repentant woman’s foil is Simon the Pharisee, at whose house the encounter occurs. The Prodigal Son has an older brother. The Good Thief contrasts to the one crucified on the other side of Jesus. Zacchaeus the tax collector, however, doesn’t have a partner, unless we count this parable for today, which appears in the adjacent chapter. And here we definitely have a contrast.

The parable is addressed to “those who were convinced of their own righteousness.” Our usual expression for this is “self-righteousness.” What I think we usually mean by that is the person who is always right, who dutifully instructs others how they can improve, but who is blind to his or her own failures. Which is to say, our typical use of the term considers the persons we are describing as not as virtuous as they think they are. In other words, we are speaking of hypocrisy.

However, when we look at the parable, the Pharisee seems to do the right things. I think we can presume he is not lying when he is talking to God. After all, lying doesn’t work with God, who already knows the facts. So we can think he is telling the truth when he lists the things he does. He fasts. He tithes. He avoids the sins of greed, dishonesty, and adultery. And furthermore, he thanks God for the ability to maintain this way of life. There doesn’t seem anything that we can accuse him of.

So maybe we can understand self-righteousness as something other than hypocrisy, as being blind two one’s own shortcomings. If we take the term literally, we can think of it as self-achieved righteousness. By that we understand righteousness to mean righteous, or just, in the eyes of God. And the emphasis on self as the belief that he establishes that on his own merits. It is not that he is lying about his accomplishments, but rather that he thinks he did them on his own.

The problem is that this position omits the role of grace in our relationship with God. It is as if we could put God into debt to us, by doing something that requires a reward. But this mistakes the character of the relationship between the Creator and the creature. We are not equals, that we can say that God owes us. And yet, God enables us to act virtuously.

Today’s reading from Sirach speaks to God’s favor toward the weak and the helpless. In comparison to the divine, we are all weak and helpless. This is what the tax collector knows. Likewise the various figures mentioned earlier, who serve as contrasts. Simon the Pharisee is oblivious to the value of the woman who is showing Jesus the acts of hospitality that Simon himself omitted. The Prodigal’s older brother fails to understand how he is not favored over his dissolute, but repentant, brother.

For reflection: Some sins only the virtuous know.

The Ascension of the Lord