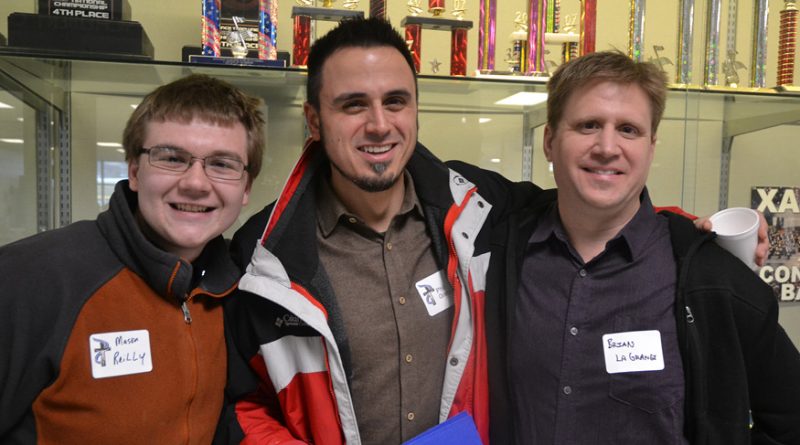 CEDAR RAPIDS — St. Peter urges us to “always be ready to give explanation to anyone who asks for a reason for your hope, but do it with gentleness and reverence” (1 Peter 3:15-16).

The latest Catholic Men’s Conference, held recently in Cedar Rapids, took a page out of the first pope’s playbook by  giving participants the knowledge they need to compassionately defend their faith intellectually as well as the tools to defend themselves and their loved ones spiritu­ally.

The annual event is sponsored by the Catholic Men’s Fellowship and the Iowa Knights of Columbus with support from the Archdiocese of Dubuque. It was held for the 23rd year March 16 at Xavier Catholic High School. Justin Roberts, a journalist for KGAN/CBS 2 TV and member of St. Jude Parish, Cedar Rapids, served as host. Anthony Digmann, an educator and Catholic author from Dyersville, provided the two keynote speeches.

“Being from northeast Iowa, my faith was formed in St. Francis of Assisi Church in Fayette,” related Roberts with a simile as the day kicked off. “Having grown up on a northeast Iowa farm, my vocabulary was formed out on the farm. Church was very important to us because every Sunday was Grandpa’s chance to wipe the slate clean to get ready for the week ahead, especially if it was the harvest time.”

Digmann’s morning address covered Catholic teaching on demonology, exorcism and holiness, the topic of his most recent book. The publication came out of his experience teaching theology at Beckman Catholic High School. He explained that expelling demons was a part of Jesus’ ministry and the first of the authority he gave to his apostles, according to Scripture.

“This needs to be a part of our spirituality,” said Digmann. “Definitely not a big part. It shouldn’t overshadow other things, certainly, devotionals, eucharistic adoration, Stations of the Cross, of course Mass attendance, but we definitely need to have a general awareness of demons, why they exist, what they do, and how to keep ourselves and others we love and care about out of trouble.”

After explaining the role demons play in Catholic theology, the author explained the best way to counter their work.

“An exorcist once said that exorcism is only 10 percent of the work,” Digmann asserted. “Ninety percent is turning to God, growing in holiness, developing a strong spiritual life, which we’re all called to do.”

Digmann’s afternoon talk, titled “Why Catholic,” focused on apologetics. Digmann explained common Protestant ideas like “Sola Scriptura,” a reliance on Scripture alone. He then analyzed them from a Catholic perspective and gave reasons why we should embrace being Catholic, like apostolic succession and the Eucharist. He was careful to emphasize the importance of humility and compassion when discussing apologetics with Christians of other denominations.

“Apologetics is not about winning arguments,” he said. “(It’s about) sharing the truth.”

In between the keynotes, participants had the opportunity to attend smaller breakout sessions on a variety of topics, including the sacraments, discernment, the family, and the relationship between science and religion.

While leading his session, Phil Drey, a theologian from Mt. Mercy University, deconstructed the common misconception that science and religion are in opposition.

“Religion is the why,” said the assistant professor. “Science is the how. They need to talk to each other. We need the how and the why.”

This topic was particularly relevant to Keith McCarraher. The Dyersville resident and adult convert to Catholicism struggled with severe doubts after taking science in college, but was reconverted in dramatic fashion thanks to God’s love. He will be ordained a deacon later this year.

“I took a science class, and it utterly destroyed me,” he said. “For the next five years, I lived as an atheist inside of a Catholic’s body and didn’t tell anyone. I prayed one prayer once a week at Mass, because I was still going, ‘God, if you exist, bring me back.’”

He stressed the need for ongoing adult education in the faith.

“I did not have to go through that pain,” he said. “I could have asked the questions that I had, and luckily, the Holy Spirit answered my prayer five years later, drug me out of that pit and showed me the truth.”

Other sessions on the sacraments, including Father Chris Podhajsky’s “How to Pray the Mass,” gave participants new insights on aspects of the faith with which they may already be familiar.

“The thing that Father stressed really is offering — offering yourself, your sacrifices, the things you do and uniting that to Christ,” said Mason Reilly of St. Wenceslaus Parish, Cedar Rapids.

Brian LaGrange of St. Matthew Parish, Cedar Rapids, has been coming to the conference with his father and uncle each year for decades and said he learns something every time. This year, Father Mark Murphy’s talk on reconciliation left an impression.

“It’s always good to hear how other people approach that sacrament,” he said. “It gives me a preparation for that sacrament. I probably don’t take enough advantage of it as I should.”

The day ended with Mass celebrated by Father Jon Seda. Organizers encouraged participants to continue the momentum at their parishes after the conference by participating in or forming new men’s groups, which is one of the primary missions of the Catholic Men’s Fellowship.

For more information on forming men’s groups in your local area, visit  www.catholicmenonline.com or contact the Archdiocesan Office of Marriage and Family Life through www.dbqarch.org. 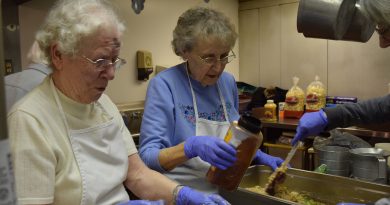 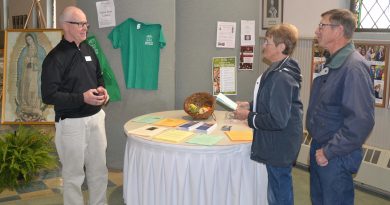 Deacons, their wives had key role at cathedral’s Door of Mercy 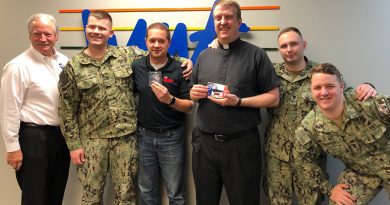