I will bless the Lord at all times

In Christ is a new creation

Parable of the prodigal son 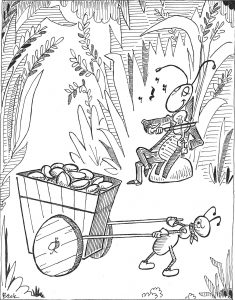 In the fables of Aesop, the story of the ant and the grasshopper provides a moral of prudent use of time. While the ant was busy storing up provisions for the coming winter, the grasshopper was idling the summer away, playing tunes on his fiddle and having a fine time. All went well until autumn arrived and the grasshopper found himself facing the harsh weather without provisions. He went to the ant, who reminded him of his frivolous behavior during the days of summer, when he could have prepared, but didn’t. And, despite his pleading, the ant did not give in. He turned the grasshopper away with a stern rebuke. The frivolous playboy had made his choices, and now he must live with the consequences.

This little tale is presented today be­cause of its similarity to today’s parable. It usefully reminds us of the cultural values that are at stake. The person with foresight will prepare for what the future holds in store. He will not be surprised by what can be foreseen, but instead will take proper measures. He will appreciate the value of hard work and not be swayed by those who do not share those values.

The contrast is like that of the prodigal son and his brother, but with one important difference. In the parable, the ending is changed around. The irresponsible brother wins the day, and the careful brother loses out. We are accustomed to the parable, probably the most famous of them all. But Aesop’s fable helps us see how shocking it is to cultural values, both theirs and ours. The wrong person gets the goods.

Luke’s Gospel contains a number of examples in which the “sinner” is given approval, while the seemingly virtuous person is not. The woman who washed Jesus’ feet with her tears is contrasted with Simon the pharisee (7:36-50). Another pharisee is compared to a tax collector, in another parable (18:9-14). And so it is with the prodigal son and his brother. Luke shows Jesus valuing repentance as a primary response to his message. And that includes coming to a new understanding of one’s place in the world, including one’s relationship to God. In some cases, this comes only after bottoming-out, as with the prodigal. He comes crawling back, but with a completely revised understanding of where he stands. He is more authentic than he ever was before.

But Luke also shows Jesus contrasting the repentant sinner with the person who has no need of repentance, having never discovered a need for it. Some call it self-righteousness. But maybe a better name for it is self-achieved righteousness. It involves attaining a level of virtue by one’s own effort. Will power. Hard work. Stern devotion to duty. All those things we are taught to prize.

However, this leaves little room for grace, in the sense of the unearned gift of God. We do it on our own, which tempts us to think that we have earned a reward and God owes us that reward. We are put in the peculiar position of putting God in debt, which grossly misrepresents the true relationship of God and creature.

And that is the other brother’s feeling about the matter. He points out that for years he has served and has never disobeyed. Yet what does he have to show for it? His problem is not so much that he hasn’t been rewarded, but rather that his irresponsible brother has been. He hasn’t paid his dues, so why is he being favored?

For reflection: The rules of civility invite us to soften the lesson and ease up on the older brother, pointing out he kept the rules and that should count for something. But the parable doesn’t do that.

The understanding of health care as a human right