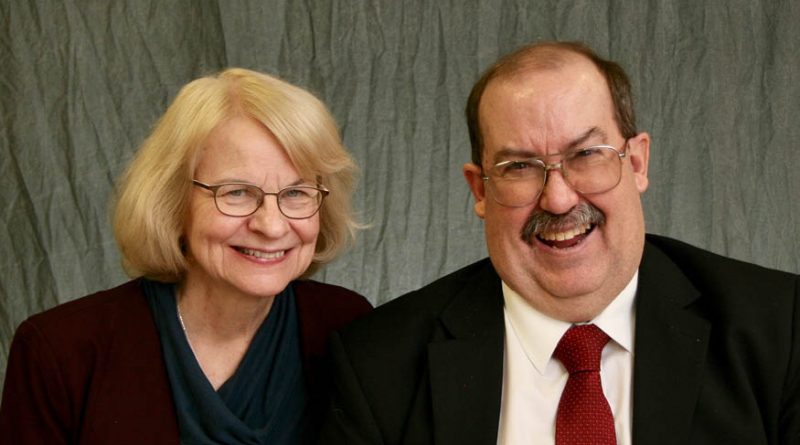 My name is Matt Berry.  I am a permanent deacon at Epiphany Parish in Mason City, Iowa, and at Sacred Heart Parish in Manly.  I have been married for 34 years to Jean Casey. We have two adult children, Katie Berry Jones and Robert Berry, who both live in the Twin Cities. I have practiced law for 34 years.

We are fortunate to have mentors in our lives.  A mentor in my life has been Msgr. Joseph Slepicka. He has been an instrument of God by helping me get into law school, marrying Jean and I, baptizing Katie, and encouraging me to serve on the parish council. I told him that I had thoughts of becoming a deacon. After asking Jean what she thought and hearing a positive response, Msgr. Joe started us on a faith journey that culminated in my being ordained on April 23, 1994 by Archbishop Daniel W. Kucera, OSB. Throughout the ordination ceremony, Jean struggled to contain the then three-year-old Robert who wanted to join his dad up on the altar.

Little did I know that 24 years later I would have had so many “God moments” by serving as a deacon.

One of those “God moments” was my experience taking the Eucharist to homebound Mike who had ALS (Lou Gehrig’s Disease). Tina, Mike’s wife, was a nurse, and the TLC that Tina gave to Mike each day was a beautiful example of a loving Christian spouse. I found Mike to be a man who was accepting of his illness, friendly, and eager to receive the Eucharist.  Over the next few months Mike and I walked on a faith journey as God prepared to call Mike home.  One evening I dropped by and was told Mike had passed away ten minutes earlier. We stood at Mike’s bedside and prayed for him.  Mike’s room was filled with the presence of Christ.

Another “God Moment” began as I, filled with the dread of not knowing what to say, headed to the funeral home for a scriptural wake service.  Andy was a high schooler who had died in an auto accident, and the wake was packed. After reading Scripture, giving a short homily, and sharing we were at the end of the service;  I asked the Holy Spirit to help this grieving family and my prayer was answered.  I requested of the mourners that they each give a hug to the nearest person. Soon many mourners were in a circle with Andy’s parents giving them hugs. I left the funeral home that night with gratefulness to Christ for being able to serve a family needing love and support.

Another “God moment” was on a beautiful June day. Jean and I stood at the back of the church with Katie who looked radiant in her wedding dress. We walked Katie down the aisle together. A few minutes later Katie and Josh recited their wedding vows as I asked them if they would be husband and wife. With our family and friends present, I thanked God for allowing me to serve as the deacon at their wedding.

One more “God moment”: Jack was a proud World War II veteran who served in the Pacific, and a resident of the Alzheimer’s unit of a local care center.  He loved to chat.  His face always lit up when he saw Jean and myself approaching to give him the Eucharist. He would spend a moment in silent prayer after receiving the host, and then he would always join us in an enthusiastic recitation of the Our Father.  Sometimes his nearby companions in the unit would also join us in that beloved prayer.

The Greek word for deacon is “diakonia” meaning to serve.   I feel that an important function of my diaconate is to call others to serve. One need not be ordained to see and respond to peoples’ needs. I make a point of inviting our parishioners to use their gifts and talents to serve in our church and the wider community.   I might encourage a parishioner to be a youth catechist, a liturgical minister or to volunteer at the local food bank.   Often we can see the gifts in others that they cannot see in themselves.

Our “God moments” are those times when we are truly serving as disciples of Jesus Christ.   As Catholic Christian people, we should center our lives on Christ and live according to his Gospel message.   As Pope Francis reminds us in “The Joy of Discipleship”: “In the Gospel, the essential thing is mercy.” Deacons, through example and encouragement, strive to bring all of our church members to focus on opportunities in their lives to perform works of mercy. I pray that the Holy Spirit empowers them to live as true disciples of Christ.

This article is part of a monthly series to mark the 40th anniversary of diaconal ministry in the Archdiocese of Dubuque. For more information on the deacon’s 40th anniversary celebration go to www.DBQArch.org/Deacon40.