SPRINGFIELD, Ill. — Father Dennis Koopman, OFM, a Franciscan priest who grew up in the Archdiocese of Dubuque, is celebrating his 50th anniversary of ordination in 2020. He plans to return to his hometown, Garnavillo, to celebrate his jubilee in 2021.
Father Koopman was born on a farm in Garna­villo, on June 29, 1940, second of four children. All through school and college he was a faithful Mass server at St. Joseph parish. After graduating with a B.S. in chemistry from Loras College, Dubuque, in 1962, he attended the University of California, Berkeley, for nine months when he answered his vocational call.
Father Koopman entered St. Joseph Seminary, Westmont, Illinois, in 1963, and began his novitiate year in Teutopolis, Illinois, in 1964. He made solemn vows in the Franciscan province of the Sacred Heart, St. Louis/Chicago Province, in 1968. After earning his M.Div. degree at the Catholic Theological Union, Chicago, he was ordained to the priesthood there on June 13, 1970. He received his M.S. in chemistry from the University of Iowa, Iowa City, Iowa, and began his professorship of chemistry and math at Quincy University, Quincy, Illinois. In 1977 he attended his Worldwide Marriage Encounter (WWME) weekend in Quincy. He has been a presenting priest on WWME weekends for 43 years. He has served on the WWME North American Secretariat Council for 24 continuous years.
In 1995, Father Koopman began preaching parish missions, living in St. Gratian Friary, Countryside, Illinois. After 21 years of that exciting ministry, he was transferred in Sept. 2016, to Springfield, Illinois, Our Lady of Angels Friary at Greccio, and is co-chaplain at the motherhouse of the Hospital Sisters of St. Francis.
Father Koopman is blessed to be part of a big extended family and hopes to share his 50 year jubilee with many of them. He has three siblings and they all grew up on the farm near Garnavillo. David (Mary), Postville, Iowa, is one year older, Joan (Jim) Kampschroer, Wausau, Wiscon­sin, is two years younger, and Jerry (Carolyn), on the home farm, is five years younger. He has 10 nieces and nephews, 18 great-nieces and nephews, and 14 great, great nieces and nephews. He found the addresses of all 55 of his first cousins, and has invited all of them to a rare large family reunion on his celebration day. It was originally planned for Saturday, June 13, 2020, but was postponed, due to the COVID-19 ­virus, to June 12, 2021, at St. Joseph Parish, Garnavillo, Iowa. 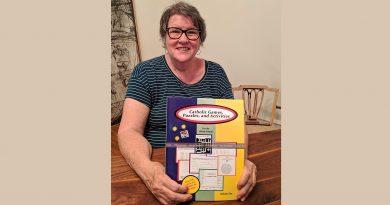