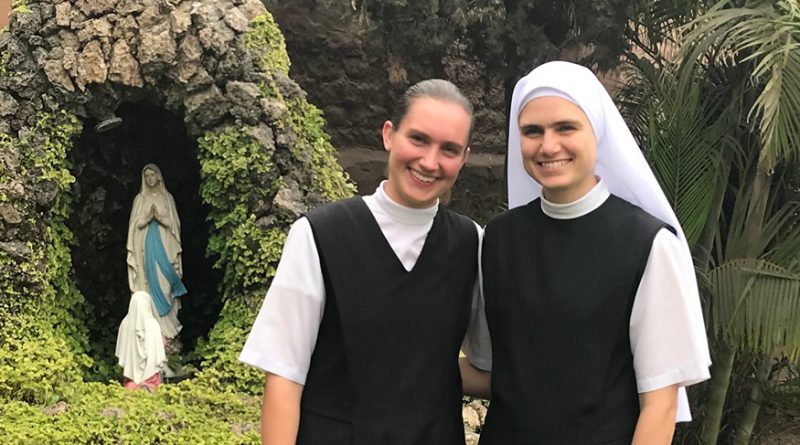 After nearly four years of formation in Peru, Sister Leann Luecke, a member of the Pro Ecclesia Sancta religious order and a native of Cedar Falls, Iowa, has returned to the Midwest.

Sister Leann was recently assigned to the Sacred Heart of Jesus Convent in Bloomington, Minnesota, located near the Twin Cities, where she is serving in the Office of Communication and Evangelization for her religious community and also is responsible for coordinating the activities of the convent’s volunteers.

The 27-year-old religious sister grew up a member of St. Patrick Parish in Cedar Falls and attended the parish grade school, as well as Columbus High School in Waterloo. After graduating with a bachelor’s degree from the University of St. Thomas in St. Paul, Minnesota, in 2014, Sister Leann discerned a call to religious life and moved into the Pro Ecclesia Sancta formation house in St. Paul.

“I remember when I knew God was calling me, and I felt like he was asking me to jump off of a huge cliff into the unknown, and I didn’t know what I was going to find when I jumped,” recalled Sister Leann. “But by the grace of God, I jumped, and he caught me and has been carrying me ever since. He takes us on a great adventure when we put our lives in his hands.”

The religious order in which Sister Leann has been living out her adventure is a rather new one, founded as recently as 1992 in Peru by Father Pablo Menor. Its name, “Pro Ecclesia Sancta,” is Latin “for the holy church.” Sister Leann was the first American woman to enter the order. She arrived in Peru to continue with her formation in June 2015, staying in the town of Chaclacayo, located near the capital city of Lima.

During her formation there, Sister Leann said she learned a lot about herself — including many strengths and weaknesses that she never knew she had — and learned more about the vocation to religious life and how that is lived out in her specific order and its charism. She said she also deepened her relationship with God and grew greatly in her prayer life. Last June, while in Peru, Sister Leann made temporary vows with her order.

Sister Leann said that while she missed her parents, Brian and Suzy Luecke, when she was in formation in Peru, she felt fortunate to still have family nearby during much of her time there. Sister Leann’s younger sister — Sister Lynn Luecke — joined the Pro Ecclesia Sancta order after she graduated from St. Catherine University in Minnesota in 2015. Sister Lynn moved to Peru to begin formation there about a year after her sister, Sister Leann, and the two lived in the same house and were able to see each other daily.

“It is an incredible gift from God to be able to share our vocation to religious life!” said Sister Leann.

“The time that we were together in Peru was beautiful,” she reflected. “We still are very close to each other because we share the same mission and know that we are each giving our lives to love and serve the Lord.”

Sister Lynn, 26, remains in Peru where she continues with formation. She is currently serving in the southern Peruvian city of Arequipa. “I know that she is loving it there and is gaining a lot of pastoral experience by helping the sisters there,” Sister Leann said of her sibling. Sister Lynn will make her temporary vows on Aug. 11 of this year and afterward will receive her own ministry assignment.

As Sister Leann continues with her new assignment in Minnesota, she said it is “a great blessing to be back in the Midwest,” though she misses aspects of Peru as well.

“We are creatures of habit as they say, so we get used to things after a while. I was definitely sad to leave Peru, where I had received many graces and made many memories, but I know that God calls me back here to live,” she reflected. “It is nice to speak English more, though I did grow to love Spanish. The cultures are very different, and each one has good things about them. America is a very efficient country, so that makes life easier in some aspects. But I do have to say that the food is better in Peru.”

Since her return to the U.S., Sister Leann said it has been interesting to see how people react when they encounter her at the grocery store or walking down the street.

“You get a lot of looks, that is for sure,” she said, “but more surprisingly is that many people come up to us and thank us for our ‘yes’ to God and for wearing the habit. They ask us for prayers, and many times they tell us about the nuns they had at their schools. We are a witness to God’s love and presence. People are thirsty for God and his love, though many times they may not realize this.”

As for her future, Sister Leann said, “I will be in Minnesota until the Lord sends me somewhere else.” Sister Leann will renew her vows for about five years until she makes her final vows, at which time, she said, “I can be sent anywhere and could be doing any type of ministry.”

“Since our order is just beginning,” she explained, “we are starting from the ground up everywhere we go, and since our charism — to live and promote holiness in the church — is a universal call for all people, and we adapt our ministry to the situation that we find the people and culture in, the specific ministry changes.”

“But most likely,” she said, “it will be something amazing!”

Part 8: Call to a state in life

Air Force veteran ready to begin duty as a priest