Archbishop Jackels' Messages Vocations What does God want me to be?
October 9, 2019October 11, 2019 Dan Russo

According to God’s plan for our happiness and for us to transform the world into the Kingdom of God, some people are called to a permanent commitment to the permanent diaconate.

The permanent diaconate is part of the sacrament of Holy Orders, like being ordained priest or bishop. And so, the diaconate is reserved to men, although Pope Francis has authorized a study of whether we may ordain women as deacons.

The permanent diaconate begins when a bishop lays his hands on a man’s head and prays over him, asking God to consecrate him, set him apart to minister as a deacon.

If a man is single when he is ordained a permanent deacon, his state in life is Holy Orders, and he makes a permanent commitment to celibacy. The single, celibate permanent deacon might have a secular job, but he might also be in fulltime Church ministry.

If a man is married when he is ordained a permanent deacon, his state in life is Marriage. He lives a normal married life with his wife and children. He might have a secular job, but he could also be employed fulltime in Church ministry.

In the sad event that the marriage of a married permanent deacon ends, then he is automatically committed to celibacy for the rest of his life.

By his ordination, a deacon makes Jesus, who came to serve and not be served, sacramentally present in the Church and world, institutionalizing Jesus’ ministry of humble service to all people in need.

A permanent deacon ministers at least part-time, ordinarily in a parish, and most characteristically in giving order to works of charity and justice, inviting people to take part, preparing them, and organizing them for that service.

A permanent deacon will also be involved in teaching our Catholic Faith and in preaching the homily, as well as in assisting at Mass, baptisms, weddings, and funerals, and in public prayer for the Church and the world.

Is God calling you to be a Permanent Deacon in the Archdiocese of Dubuque?

Homily for the Service of Lament 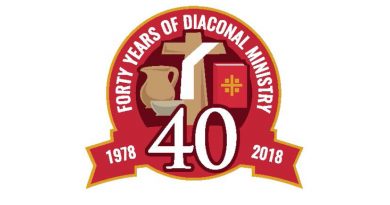 Reflecting on the diaconate’s impact on immediate and extended families