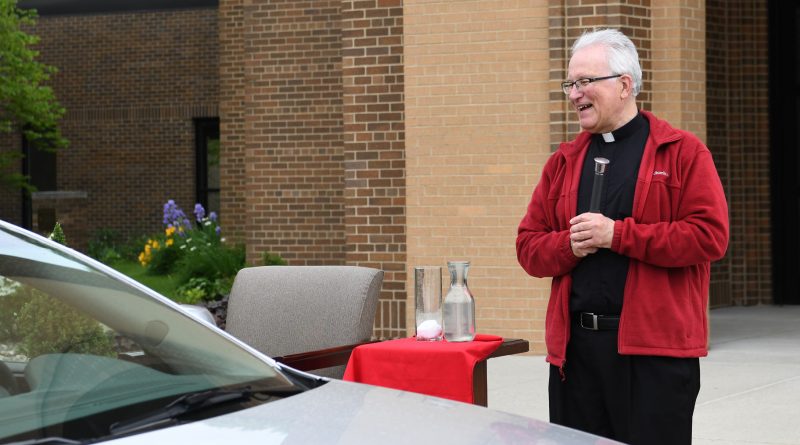 AMES — Father James Secora celebrated his 45th anniversary of ordination to the priesthood on Sunday, May 31 (Pentecost Sunday) with a liturgy in Ames at 10 a.m. with only a few staff members present, a virtual congregation, and no reception after Mass.

A few weeks before his anniversary date, some of the staff at St. Cecilia Parish wanted to plan something unique for their pastor to commemorate his anniversary. Kayla Greiner, director of youth ministry for the parish said, “I knew Father Jim was missing his parishioners … With his last few months as our pastor, he has not been able to see and celebrate Mass with them due to the COVID-19 pandemic. I wanted to do something special for him.”

The staff at St. Cecilia brainstormed about what could be done to celebrate his anniversary “COVID style.” They came up with the idea for a surprise drive-by celebration in the parking lot of St. Cecilia Church.

Mary Sue Derks, St. Cecilia’s administrative assistant, said, “We thought a surprise celebration would be nice. We knew it was going to be tough. Father Jim has commented before that, ‘You cannot keep a secret from the pastor!’ but we were going to try our best.”

The staff immediately started planning and contacting people to help out. They asked Pete Tekippe from Pete Tekippe Photography to take photos. They asked the Knights of Columbus to help with traffic flow in the parking lot. They asked Deacon Mark and Melissa Bortle to assist with holding the doors open and receiving cards from people.

On the morning of May 31, the few staff that has been assisting the priest to celebrate Mass that day were ready and excited. They kept Father Secora at church after Mass by sharing brunch with him. When it got close to 12 p.m., some of the staff had preplanned to make up excuses to leave early from brunch. Those staff members left for the parking lot to make sure all was set up for the celebration. When everything was ready, a single staff member still with Father Secora asked him to come out to the parking lot with her, using the excuse that she needed help carrying something in from her car that was too heavy for her.

Around noon, Father Secora walked out of the main entrance of St. Cecilia and the horns started going off. Father Secora was shocked and surprised. He started waving and had the biggest grin on his face.

Father Secora said, “I was overwhelmed when I saw all the cars and listened to the horns sounding and the church bells ringing. I hoped some of the neighbors weren’t going to call the Ames police and report a sound nuisance complaint!  Just kidding!”

“I could never have imagined such a greeting!” reflected the pastor. “It was wonderful to see all those people whom I hadn’t seen in two months! Nobody seemed to have aged too badly! The kindness and love will remain a memory I will treasure always.”

The surprise drive-by celebration was a total success. There were approximately 130 cars, one motorcycle and two bicyclists. People made signs and decorated their cars. One pick-up truck had a train with the rail cars listing the places he’s been a pastor. Everyone enjoyed wishing Father Secora a happy anniversary. In the end, keeping the secret from the priest was only semi-successful.

Father Secora said, “I can’t say I was totally taken off guard. One day Mary Sue … got called away from her desk for a couple of minutes. She had sent a memo regarding the celebration to the copier machine just before I had sent something from my office. When I went into the copy machine room and picked up the stack of papers as I was going through them, I saw Mary Sue’s memo.”

Father Secora humbly explained that he took action to make sure the element of surprise wasn’t completely compromised.

“Glancing at it, I immediately saw that ‘this is not for my eyes’ and turned it over,” he said. “Walking out into the office I handed the paper to a startled Mary Sue who said, ‘You didn’t read this, did you?’ I must confess to telling a tiny lie as I replied, ‘No. I saw just the beginning and knew it was for your eyes only.’ … But, in the end, I could never have imagined what all of this would look like.”

Check out St. Cecilia’s Facebook page for photos and videos of the celebration.

Feature photo: Father James Secora smiles and waves at parishioners and friends during a surprise drive-by party held May 31 in Ames to mark 45 years of his priesthood. (Photos by Pete Tekippe) 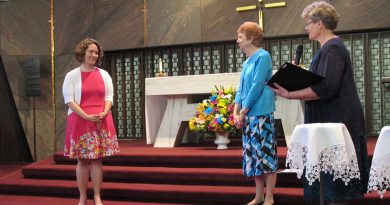 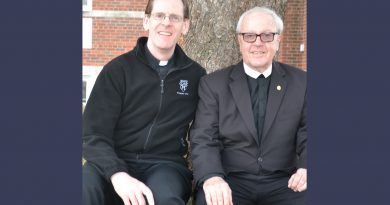