Begins this summer in Davenport and Dubuque dioceses

By Barb Arland-Fye
Special to The Witness

CEDAR RAPIDS — Greg and Julie Alex­ander sat in front of the priest who led their diocese’s marriage tribunal and bickered. After 10 years of marriage harmed by infidelity and misguided priorities, they wanted an annulment. They liked the priest who had substituted at their Texas parish and hoped he would help them to obtain it.

Instead, he asked them a few questions that they were unable to answer: What is God’s plan for marriage? What does our church teach about the marriage covenant? What do the holy fathers and St. Paul say about marriage? The priest gave them homework to learn about God’s plan for marriage before making any decision about theirs. The Alexanders’ studies led them back to the sacraments and to rebuilding their sacramental marriage. In gratitude, they created an apostolate almost 20 years ago to help other married couples strengthen their sacramental marriages.

Couples minister to other couples

Both dioceses recognize the need to help support healthy marriages and chose to collaborate on the marriage mentors program. Matt Selby, the archdiocese’s marriage and family life director, said he’s seen the need for marriage mentor couples through his work in a parish and the archdiocese. “While professional counseling can sometimes be a good place to turn, not every couple needs that. Mentor couples provide an opportunity for one couple to accompany another couple through catechesis and witness. This model benefits both couples,” he said.

When he met the Alexanders, “I was sold on their model. They have so much experience mentoring couples themselves (they’ve personally worked with about 4,000 couples) and have a great vision and process for how to approach mentoring,” Selby said.

Couples ministering to other couples resonated with Marianne Agnoli, marriage and family life coordinator for the Davenport Diocese. “Our diocese already benefits from a strong Sponsor Couple ministry which helps engaged couples prepare for marriage and it seemed to be a natural evolution to train mentor couples to ­journey with married couples as well. Marriages at all stages of the life cycle benefit from intentional attention and care.”

Agnoli said results from the 2018 Diocese of Davenport Marriage & Family Initiatives Inventory (completed by 40 priests and seven deacons) indicated that they are collectively approached by about 150 couples a year concerning difficulties in their marriage.

“I have a resource sheet available with a number of recommendations, based on the circumstances,” she said. Marriage mentors will provide one more, valuable resource to promote healthy marriages. Ideally, she hopes to have 12 couples trained, two for each of the six deaneries in the Diocese of Davenport. Nine couples were trained last month for the Diocese of Davenport and 23 for the Archdiocese of Dubuque.

“You are here to care for one another’s soul,” Julie Alexander told all of the married couples gathered for the retreat day that preceded mentor training. “We’re here to help each other to get to heaven,” Greg Alexander said. They emphasized the centrality of God in every couple’s marriage.

During the training, Julie Alexander told the marriage mentors that “you are going to help other couples grow closer to God.” She and her husband stressed the importance of prayer in marriage. They held each other’s hand and prayed during the training session and shared that they say a prayer every morning together before getting out of bed.

The Alexander House Apostolate describes marriage mentoring as a “Cate­chesis, initiating couples into the fullness of Christian life on marriage. Hopefully, it is taking a couple into deeper understanding of their sacrament, oath and commitment in their marriage.” Marriage men­tor­ing is not counseling; rather, it provides a process to give couples a better and more effective way to live in harmony with each other as husband and wife, the Alexanders say.

Marriage mentors journey with the couples they mentor, sharing stories and experiences, including their journey toward a deeper understanding of the fullness God intended for their marriage. The mentors share failings and victories in their own marriages and offer practical tools needed to best live out the sacrament of marriage.

The process consists of six sessions that build upon each other: family of origin, priorities, forgiveness and healing, communication, sacramentality of marriage and sexuality in marriage. Sessions typically last about an hour and begin and close with prayer. Couples being mentored view a video prior to each session and complete an exercise.  At the following session they discuss the video and the exercise. The videos provide a foundation on which to rebuild or strengthen their marriage, the Alexanders say.

The effectiveness of marriage mentoring depends on the commitment of both spouses to be open to God’s plan for marriage and to put in place the practical tools provided. “Love that lasts a lifetime entails hard work and commitment,” the Marriage Mentor program states. If the couple being mentored faces a challenge between sessions, they are encouraged to call their marriage mentors.

Training to be Marriage Mentors

During the training in Cedar Rapids, marriage mentors engaged in the exercises that the couples they mentor will also complete. A forgiveness and healing exercise, for example, requires spouses to spend 30 minutes alone with God to reflect on how each has hurt the other spouse through the years. They express contrition to each other and promise to try their best, with God’s grace, to not commit that sin or sins again. Spouses are encouraged to celebrate the sacrament of reconciliation as soon as possible following the exercise.

“We were reminded during the training that the issues we see in mentoring are basically the same from marriage to marriage — they just exhibit themselves with differing bad habits,” observed Charlotte Upah. She and her husband, Deacon Stan Upah of St. Patrick Parish in Tama, Iowa, have served as marriage mentor/coaches for 12 years and were trained in the Alexanders’ process. They have been married 38 years. “While every couple will work through those habits with slightly different responses and outcomes, the habits to a great Christian marriage are the result of prayer (communication with God), communication with each other, the desire to put God and our spouse first, and forgiveness when we fail to be our best selves.”

Deacon John and Tracey Jacobsen of Sacred Heart Cathedral in Davenport found the training helpful for their ministry and their marriage of almost 30 years. “The training helped us to understand the ways in which we can mentor couples that are in need of help with their marriage or to even live a more Christ-driven life,” Tracey Jacobsen said. “The information that was given is so valuable to a married couple. Also, knowing there will be ongoing updates to the website, forums where other mentors share ideas, will help enhance this ministry.”

Hannah and Aaron Miller of St. Joseph Parish in West Liberty have been married almost 20 months and desire to minister to other young couples like themselves. “While we may have just started on this marriage journey, we feel we have a lot to offer young couples who are preparing for marriage and who are newlyweds,” Hannah Miller said.

“There were so many unexpected challenges our first couple years of marriage that perhaps would have been easier to navigate had we had the opportunity to talk with others who had recently experienced similar situations. We have known each other for 10+ years and have literally grown up together. We have experienced the highs and lows associated with graduate school, looking for employment and learning how to merge two families. So, we are excited to step into the Marriage Mentors role and help encourage others to develop a strong, faith-based marriage,” Hannah Miller said.

During the training, “We learned a lot about the importance of open and honest communication in a marriage,” she said. “Being able to trust your spouse with everything going on in your life, as opposed to just the positives, develops deeper connections that can help during the rough times. In addition, we learned how important it is to pray together as a couple. Implementing this in our daily routine has brought us closer together and strengthened our faith to ensure God serves as the central component of our marriage.”

Arland-Fye is the editor of The Catholic Messenger, newspaper of the Diocese of Davenport.

Greg and Julie Alexander speak with Deacon Stan Upah (right) of the Archdiocese of Dubuque during a training session for a marriage mentor program, recently held at St. Ludmila Parish in Cedar Rapids. (Photo by Barb Arland-Fye/The Catholic Messenger) 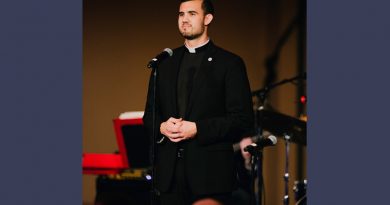