Let all the nations praise you

The Paraclete, the Spirit 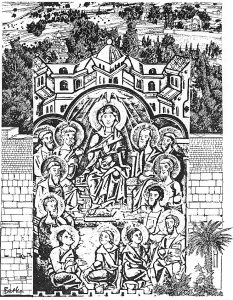 We have been following the readings from Acts of the Apostles, which do not receive much attention. Then, they only appear in the lectionary during the Easter season and there are always so many other things to command our attention. So now we are taking some time to remedy that.

The fifteenth chapter of Acts is a famous episode, in which the Council of Apostles meets to make some important decisions. It falls in the middle of the book. Prior to this, we have heard about Peter’s vision of all foods being clean and, therefore, edible (Acts 10). That removes certain barriers preventing non-Jewish Gentiles from entering the community. And so it sent him to the house of Cornelius, the Roman Centurion, to tell him that he is welcome to enter the community without converting to Judaism. This is new and will need to be considered by the Council as to whether it serves as a general principle for all the young church.

Following that, we also hear about Paul and Barnabas. They too have been welcom­ing Gentiles into the community of followers of Jesus (Acts 13-14). And here too we have something new, insofar as Paul and Barnabas have not been requiring the Gentile men to be circumcised when they enter. This too is a watershed moment. Up until Gentiles were being converted to the community, it consisted exclusively of Jews. It was easy to think of it as a special (and to the believers, the only) way to be Jewish. It was a Jewish movement.

But now, once non-Jews were being admitted, this had to be re-thought. Some felt that any new members must first be converted to Judaism. That was their understanding of the Christian community as basically an expression of Judaism. But Paul and Barnabas fought against this view. Again, the Apostolic Council had to make a general decision on this.

In today’s liturgy, we have only a selection of Acts 15, leaving out verses 3-21. What we have left may raise some questions. For instance, the reason given for the meeting is said to be the innovation of Paul and Barnabas, admitting new members without circumcision. And yet the final conclusion talks about adjusting another regulation, namely that of food laws. So a brief look at the overall chapter might help.

The council meeting was indeed stimulated by the objections raised by some against what Paul and Barnabas were doing. In this regard, the circumcision issue prompted the council. But notably Peter also gives testimony about his own experience. And that will be honored in the final decision about food laws. However, most of the time will be spent on the circumcision issue.

And of course the two matters — food laws and circumcision regulations — are connected. Both are incumbent upon faithful Jews. The food laws not only dictated what they could and could not eat, but for many it put restrictions on with whom they could share a meal. In the community, the common meals were a defining feature. Paul and Barnabas took it to the next step. If all were welcome, Gentiles could remain as they were and not be circumcised.

At the end, the council issues a double report. First, James, head of the Jerusalem church, make it official (15:13-21). Then a letter is to be sent to the churches (15:22-28). The lectionary for today, unwilling to be repetitive, gives us only the second of these.

But why does Acts give us both? Well, the pronouncement of James settles the issue for the church. That concludes what has gone before (Acts 1-14). But the letter sets up what follows and serves as the cover letter for Paul’s mission to the Gentiles (Acts 16-28).

For reflection: The early church comes to a new self-understanding in this chapter.

The time is 2 minutes to nuclear midnight

Opening the door of faith