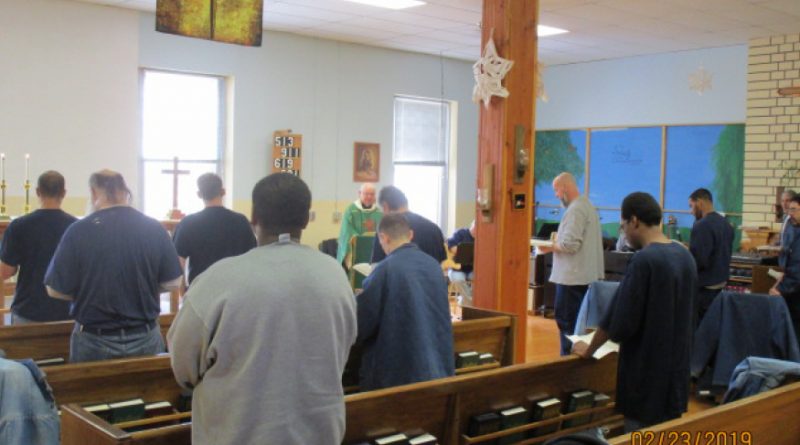 Sacraments are important in lives of Catholic inmates

ANAMOSA — Like sunlight streaming through a cell window, God’s grace enters even the toughest prisons.

Nowhere is this more evident than at Anamosa State Penitentiary’s chapel on a Sunday morning. The worship space hosts prisoners of many faiths. For Catholics, the opportunity to receive the sacraments of reconciliation and holy Communion are available every week there thanks to Catholic Charities of the Archdiocese of Dubuque’s Jail & Prison Ministry, a dedicated team of priests and deacons, and the generosity of donors.

“To me the Mass is a valuable asset in my life because it gives me the opportunity to be nourished with the body and blood of Christ,” said Dave, one of the inmates. “This feeds my soul with God and leaves me content. I also get fed with the Word and am blessed with fellowship. The priests also offer confession, which offers me healing for the brokenness I have experienced and still experience when I fail.”

The spiritual life  at one of Iowa’s highest security facilities takes place with the support of the warden and staff. Several dozen prisoners attend the Catholic liturgy every week. Some of them recently reflected in writing on the role these sacramental opportunities have in their lives.

“Being a part of the full Mass on Sundays, I participate in an event expressing shared faith with the whole Catholic family which for me provides a sense of the importance to be part of the community here and there,” added Monty.

Ministry Inside the Walls

Catholic Charities’ Jail & Prison Ministry, currently led by Deacon Bill Hickson, has a long history at Anamosa State Penitentiary as well as at other state and county prisons. Reaching out to incarcerated men and women is part of the ministry’s overall program based on restorative justice. This also includes support for former inmates once they regain their freedom.

In recent years, there has been an organized group of priests who share the responsibility of visiting the penitentiary to provide sacraments on a rotating basis. Many of them are retired, but a few, including Archbishop Michael Jackels and a bilingual priest who celebrates the Mass in Spanish, are in active ministry. The current effort has deep roots, according to Father George Karnik, who has been involved at Anamosa for over 30 years. He was among a group from the outside that, in 1975, came in for the first Christian Experience Weekend (CEW). The weekend-long retreat took place in the gym.

“We slept right on the floor with the guys,” recalled Father Karnik.

The priest still visits regularly. When he does, he described a strict screening process upon entering. He called the work of the guards a “very special ministry” and also expressed respect for the prisoners who have specific responsibilities in the chapel each week. Clergy bring in wine and holy oils, but inmates, in cooperation with staff, prepare the unconsecrated hosts, set up the altar and perform other tasks, including music.

“Those who come value their Catholic faith,” explained Father Karnik. “The liturgy is very well done. I’m really impressed with the spirituality of some of these men.”

On Sundays, Mass usually starts at 8:30 a.m., with reconciliation happening before that. Many participants, like an inmate named Terry, never take these chances to get closer to God for granted.

“I can’t imagine life without the sacraments,” he said. “I am so grateful to the volunteer priests that allow me to live a sacramental life.”

Inside the chapel, there is a mural of St. Dismas on the cross, one of  two convicted criminals crucified with Jesus. Dismas asked for mercy and was welcomed into heaven.

“‘Like all parish communities, we begin Mass with, ‘Lord, have mercy’ and receive Communion praying, ‘Say but the word and my soul shall be healed,’” said Msgr. Russell Bleich, another of the priests who regularly visits. “The men continually inspire me as they celebrate Mass, reconciliation and anointing of the sick with faith and devotion. … Many read the Bible, study the Catechism, and,  like us, are men with a personal prayer life. They are trying to know how to love God and others in their situation. Among them are those eager for a life  of deeper union with Jesus.”

In addition to the Sunday morning activities, deacons and lay volunteers visit at other times to assist with Rite of Christian Initiation of Adults (RCIA) classes at the penitentiary. Over the years, inmates have joined the church or come into full communion after already having received some of the sacraments of initiation.

“Like all Catholics, they hear Jesus call them  to repentance and renewal,” reflected Msgr. Bleich. “In restorative justice, they know they are called to recognize and reflect on the harm they have caused their victims and their families and do what they can to make amends. They also deal with the hurt their actions may have caused in their own families.”

“The men of  faith and hope in the prison inspire me to want to be a better priest, an unworthy sinner called to serve those Jesus died to save,” said Msgr. Bleich.

A Corporal Work of Mercy

Many people outside of the penitentiary have supported the efforts of the jail and prison ministry there. One of those groups is the Ancient Order of Hibernians Division 2, based in Dubuque County.  This faith-based organization also has the mission of preserving Irish Heritage, according to President Pat Leonard.

About two years ago, the Hibernians contributed money to provide a new sound system for the penitentiary ­chapel. More recently, they donated a sum to cover some of the travel and other expenses necessary to have the Sunday Mass.

“We’re here to support the church and the works of the church,” said Leonard. “It’s one of the corporal works of mercy to visit those in prison.”

The Knights of Columbus is another organization that has offered support. Recently Council 15813 at St. Columbkille Parish in Dubuque held a breakfast with all proceeds given to support the Mass and other ministry activities at the penitentiary.

“Deacon Travis King has been talking to our council on the beatitudes and the importance of the spiritual works of mercy, along with what we have been doing, which was mostly the corporal works,” said Mark Hoeger, deputy grand knight and program director for the council. “We served approximately 240 people;  we had 40 Knights, spouses and families involved, and with two in-kind donations from fellow Knights, we were able to make a profit of $2,700. … Our Knights council has been very blessed with great parishioners and their families supporting our fundraising efforts.”

The Catholic inmates at the penitentiary expressed gratitude for all those who support the jail and prison ministry, especially the priests.

“To all the priests who come here to Anamosa State Penitentiary to celebrate the Mass, reconciliation and their humanity, thank you for answering God’s call on your life and saying yes to your vocation,” wrote an inmate named Phil. “The Eucharist is the source and summit of Christians everywhere and thanks to you I know that God loves me and forgives me.”

For more information on volunteering with or contributing to Catholic Charities’ Jail & Prison Ministry, visit www.catholiccharitiesdubuque.org. 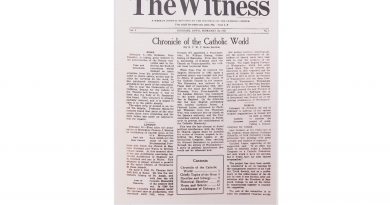 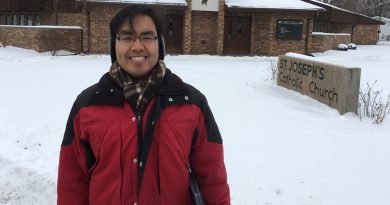