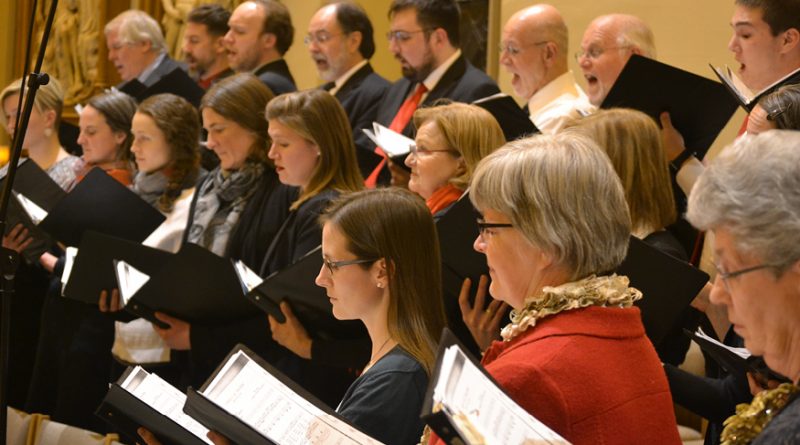 DUBUQUE — Jim Mendralla, liturgy and music director at St. Raphael Cathedral in Dubuque, believes passionately in the ability fantastic music has to bring humanity closer to God. This is why he, with the help of a choir of talented singers, has been brining the Lessons and Carols program to the cathedral for going on eight years.

At this season’s event, scheduled for Jan. 4, 2019, the performance will have a unique personal aspect to it since it will feature the fellowship between three artists of three different generations.

Mendralla was an important influence on John Gaffney, a nationally published Catholic composer. The Wisconsin-native will be debuting his new choral arrangement of “Ave Maria,” dedicated to his mentor, and plans to attend. In turn, Mendralla is dedicating the performance to Father Ron Gollatz of the Archdiocese of Chicago, his own mentor and friend who encouraged his calling to a life of music ministry. The priest died in 2018.

“There’s a lot of dissonant harmonies in (my composition) that makes it sound very lush,” said Gaffney of his original arrangement of the Hail Mary prayer sung in Latin. “If you played four notes on the piano together it would sound pretty bad, but if you have four parts of a choir, four voices singing those four notes right next to each other, it’s dissonant, but it sounds very ethereal.”

Gaffney, now in his 30s, and his mentor, Mendralla, now in his 50s, share a love of sacred choir music.

“Good choral music has a way to open a door to people’s spirituality and cultural sense … and if they’re not exposed to that, they loose the opportunity to be enriched in a very deep way,” said Mendralla. “If someone is not pulling these gorgeous pieces out and exposing people to them, then we all lose. I feel a mission to bring to light these amazing compositions that these musicians have been divinely inspired to write.”

The first measure of the intergenerational musical saga that will be part of this January’s Lessons and Carols was played when Mendralla was a young man growing up at St. Emily Parish in the suburbs of Chicago. Father Gollatz and Paula Gliot, the lay music director at the church, noticed Mendralla’s talent for the organ and other instruments. They took an interest and encouraged the youth.

“They were both the ones who said to me, ‘Go, you have a vocation, study and do what you need to do,’” recalled Mendralla.

After getting a degree from Benedictine University, Mendralla took his first post at a parish in Buffalo Grove, the second largest in the Archdiocese of Chicago. ­Father Gollatz kept helping him develop his talent, and that’s where the newly minted music director met Gaffney.

“When I was in high school, he was in his first parish out of college and I was his assistant at the parish,” said Gaffney. “He was really my first mentor in liturgical music. Then he switched parishes in Chicago, and I went with him.”

Gaffney eventually studied for degrees in music and theology and headed off for a parish position in California. Mendralla eventually took the position at the cathedral. Through the years, they stayed in touch, as did Mendralla and Father Gollatz. At times, both the priest and the composer have came to Dubuque to attend Lessons and Carols.

While a parish music director, Gaffney began composing musical arrangements of lyrics, many times out of necessity.

“I always have to have the text first,” he said. “I don’t write text. Usually, I sit at a keyboard. I just kind of go measure by measure — figure out the harmonies, figure out the parts for the choir.”

Fruits of a Rocky Path

One day, Gaffney was trying to prepare a volunteer choir at this parish for a performance and he knew he had to act quickly.

“It was the last rehearsal we had before the solemnity of the Ascension of the Lord, and the choir was working on a really cool piece for the Ascension, and I knew they would not have it ready with one rehearsal left,” recalled the 38-year-old. “I composed a new piece for the Ascension in my office in about an hour, and it was a piece that was easy enough for the choir to learn in one rehearsal. It was really well received. It was published, and it’s the best selling piece that I have published.”

GIA Publications, a national liturgical music publisher, started picking up the composer’s work several years ago. His arrangements are performed in churches around the country.

Gaffney had to leave parish ministry due, in large part, to his development of a serious case of Crohn’s disease. This has been difficult, but Mendralla believes there have been some positive developments as a result of the ordeal.

“John has been writing more,” said Mendralla of his mentee. “He has an illness that can be pretty debilitating, but out of his illness comes some of his best composition because it’s a way for him to heal, to cope with pain and suffering.”

Gaffney reflected that being a church composer has actually increased his connection to God, even during his current health crisis.

“I was actually just very ill,” he recalled. “I had to have surgery and was in a lot of pain for about three weeks.  All (the music I was working on) kept running through my brain — I couldn’t stop hearing those (musical) pieces. … All the pieces are basically Scripture, and some Scripture just sticks in your brain. That’s why the Roman liturgy is intended to be sung. There was no spoken Scripture that was running through my brain at all, just all (Scripture sung at) the liturgy.”

Lessons and Carols offers a good venue to experience the divine through word and music. The tradition combines the reading of the Christmas story in Scripture with intricate choral pieces.  It began in 1918 at King’s College in England as an effort by an Anglican minister to bring his church a more imaginative form of worship. Its format has since been adopted by many Christian denominations and is performed annually across the world. The King’s College event is broadcast every Christmas Eve on Iowa Public Radio, according to Mendralla.

He says this year’s event at the cathedral will feature the choir performing pieces they sing each time as well as some new offerings, including Gaffney’s original choral arrangement. Mendralla is grateful to his mentor Father Gollatz and is grateful for his own mentee, Gaffney.

Gaffney will be flying in for the occasion and plans to attend with some of his family. Mendralla is looking forward to seeing him.

“I’m very proud of (John) and what he’s accomplished — his high standards; his love for the liturgy and his real attention to the detail of the sacred and the senses of the sacred.”

Cover photo: A volunteer choir made up of members of several different Christian churches in the Dubuque area performs the Lessons and Carols program at St. Raphael Cathedral in January 2018. Jim Mendralla, liturgy and music director at the cathedral, has been leading the performances since coming to Dubuque in 2008. (Photo by Dan Russo/The Witness) 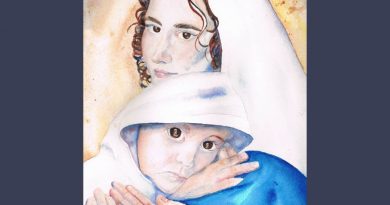