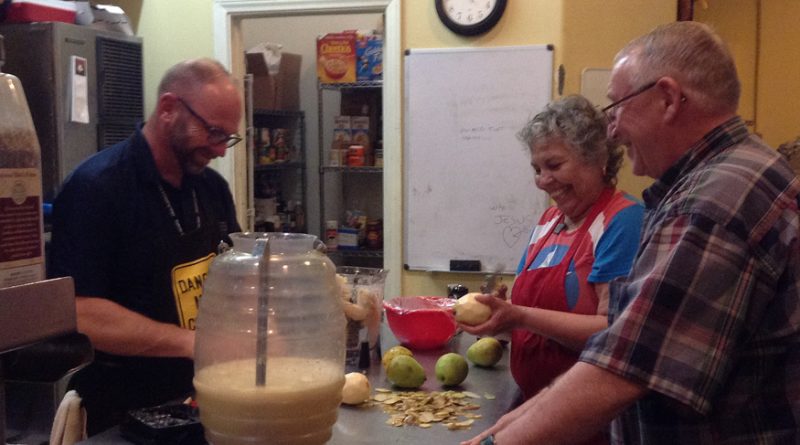 Three from archdiocese volunteer at Catholic Charities facility in Calif.

CEDAR RAPIDS — One of the big debates in today’s tense cultural and political climate is how to handle the immigration situation at America’s southern border. Rather than being caught up in the whirlwind of public policy disagreements and protests surrounding this issue, Deacon Dan Rigel and his wife, Nancy, of Waterloo are among the many Catholics who have chosen instead to focus on humanitarian needs.

On June 15, the Rigels left Cedar Rapids for Coachella, California, to join Cath­olic Charities’ frontline response to the migration crisis, volunteering for about two weeks.

“Our whole life has been about service,” said Deacon Rigel, with Nancy adding, “This wasn’t anything new. Another invitation came, and we said, ‘yes.’”

This time, there was no doubt about where the invitation would take them, but simply when, as Catholic Charities matches the schedules of its volunteers with locations that need them.

Catholic Charities is a national organization dedicated to a diverse array of charitable works — from prison ministry and mental health counseling to housing, disaster relief and immigration legal services, among other endeavors. Headquartered in Alexandria, Virginia, the agency has affiliates in Catholic dioceses all over the United States, including in Iowa.

Catholic Charities’ national leadership  recently spread the word about the urgent need for volunteers from across the country to help local affiliates in border states that are working to provide humanitarian assistance to the growing number of asylum seekers crossing into the U.S. from Mexico, according to Tracy Morrison, executive director of Catholic Charities of the Archdiocese of Dubuque.

She explained that the Department of Homeland Security is releasing thousands of detainees because of overcrowd­ing, leaving individuals without food, shelter and basic necessities.

“Catholic Charities of the Archdiocese of Dubuque put out our own call for help among our nearly 200 active volunteers to see if anyone was interested in helping at the border,” said Morrison. “We knew individuals would be either sent to Texas, Arizona or California.  We had several volunteers express interest, but three of these individuals, Deacon Dan Rigel and his wife, Nancy, and Deacon Michal Schemmel accepted this invitation and deployed for two weeks to Catholic Charities in San Bernardino and Riverside Counties in California. Thanks to many generous donors to Catholic Charities USA, these volunteers’ expenses were covered.”

The Rigels, members of Sacred Heart Parish in Waterloo, have assisted Catholic Charities since the beginning of their marriage. Their first service trip with the agency took them many years ago to New Mexico. Their latest journey placed the Rigels at Coachella in a retreat center. Catholic Charities established the facility in October 2018. The retreat center’s purpose is to coordinate with the U.S. Border Patrol to care for people the patrol drops off there.

Even with a basic staff, including a maintenance person, kitchen staff, and personnel to handle donations and fulfill other duties, the sheer amount of people who pass through — anywhere from 50 to 150 in a day — necessitates outside volunteer help.

Catholic Charities works to equip the people it helps with all the basics they need to navigate and survive in surroundings that would otherwise be completely bewildering to them. Some of the aid the agency provides includes paying for bus and plane tickets and giving other support to connect migrants with their sponsors across the United States. All of this involves quite a bit of paperwork, which is one part of the ministry in which the Rigels aided.

“What they did was to teach us how to take all this information provided by the border patrol and put it into Catholic Charities’ computers and make copies,” said Nancy. “That was the first few days — computer work.”

Additionally, the Rigels also assisted in sorting out donations, separating what could be used from what could not.  A typical day would involve distributing the proper paperwork to each person dropped off, helping the arrivals through a medical examination, and getting them food, a warm shower and clothing in proper sizes.

Nancy said that, aside from the practical benefits to the health of the migrants, a major goal of this routine is to restore the natural human dignity of the people who come through, since they often have nothing when they are dropped off.

“As a deacon, it’s just one step further than what we’ve been doing,” said Deacon Rigel, when asked about what connection his volunteering has with his general work in the Archdiocese of Dubuque. “It confirms what I’m all about. My wife and I are a team in everything we do. We also have an international family, so we have a different view on things and personal reasons for supporting immigration; all four of our kids are married to immigrants. It makes a difference for us as to why we volunteer, but I think we would have anyway.”

“It’s not a political statement for us,” added Nancy. “It’s about taking care of humanitarian needs.”

Nancy also noted that gangs, violence and poverty are the top three reasons people give for why they are leaving their homelands. Knowing this adds to her desire to give aid.

The Rigels don’t consider themselves heroes, saying “It was no tremendous sacrifice” and pointing out that they had a comfy hotel to return to at the end of the day after finishing their work, unlike the people they served. Instead, they wish for the focus to be placed on the work of Catholic Charities, citing in particular the paid staff and other volunteers they worked with, who will often work until midnight and even on Christmas Day.

This sentiment was echoed by Teresa King, the community outreach coordinator in Catholic Charities’ Waterloo office.

“I’m humbled and honored to be the volunteer coordinator,” said King. “I love working with the volunteers and am always amazed at their willingness to serve.”

Catholic Charities of the Archdiocese of Dubuque recently coordinated a donation drive during which materials were gathered to help people at the border. On July 17, Warren Transport, a local trucking company, picked up the supplies at the agency’s Waterloo office and transported them to Catholic Charities of the Diocese of Laredo in Texas. Some of the items collected were backpacks, toothbrushes, diapers, flip flops, shoelaces, men’s belts and coloring books.

The Rigels encouraged people to continue to be generous and also advocated for prayer, as it is the one thing that anyone can give, regardless of their physical condition and ability to help.

Morrison expressed gratitude to Deacon Dan and Nancy Rigel, Deacon Schemmel and the many other volunteers who have responded to the current crisis.

“We are one of nearly 25 Catholic Charities agencies from around the country to send volunteers to the border,” said Morrison. “We’re so proud of the willingness of these three individuals to put their own lives on hold to be of service to others. They each individually represented our diocese so well, and we are so thankful of their stewardship.  In our time of need in the past with our own disasters like flooding and tornadoes, our colleagues from around the country have been the first in line to help us, so we are delighted to be able to return the favor.”

For more information on the ministries of Catholic Charities of the Archdiocese of Dubuque, visit catholiccharitiesdubuque.org.

Deacon Michal Schemmel of Sumner (left) and Deacon Dan Rigel of Waterloo work with a local volunteer in the kitchen of a Catholic Charities center for migrants in Coachella, California. (Contributed photo) 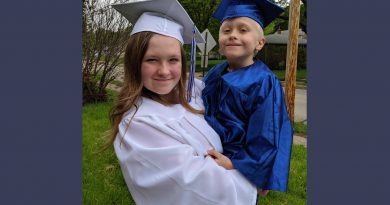 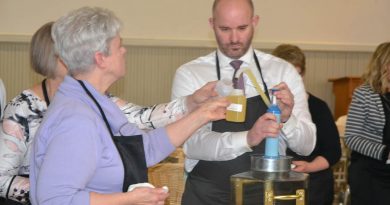