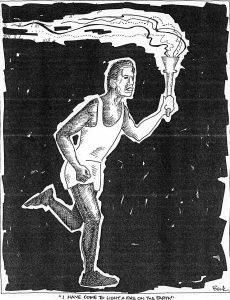 Jeremiah lived at a difficult time. The kingdom of Judah was coming to an end, and no one was paying attention. Instead, they were quarreling about how to defend against the threat of Babylon, which had recently raised the level of its interest in the westernmost edge of its empire, which included Judah and its capital Jerusalem. Even more to the point, Judah was the gateway to Egypt, rival to Babylon. And the ruthless king of Babylon, Nebuchadnezzar, was making aggressive moves to isolate Egypt. Securing Judah was part of his plan.
How to respond to this was a huge topic of debate in Jerusalem. The instinctual reaction among the leadership class was to mount an opposition. The first attempt at this did not fare well. In 598 B.C., King Jehoiakim and his party of officials and followers were rounded up and deported to Babylon. Then Babylon put his brother, Zedekiah, on the throne, with the idea that he would be properly submissive and cooperative. Meanwhile, the Jerusalem nobles were agitating for more active resistance.
Into this situation stepped the prophet Jeremiah. His message was that it was foolish to mount an opposition against Nebuchadnezzar. That would only increase the damage when the inevitable fall came. He advised submission to Babylon as the price of survival. But he saw that he was in effect talking to an empty room. No one wanted to hear what he had to say. They accused him of treason, for not being patriotic. And they accused him of blasphemy, for suggesting that God, whose dwelling on earth was the temple in Jerusalem, would permit Babylon to defeat the city.
But Jeremiah, who saw things so clearly, found that no one else saw as he did. His famous speeches of dejection, the “jeremiads,” were expressions of his sorrow. He had failed to bring the people of Judah into the grieving process for their coming losses. But he had already begun to grieve.
In 587, approximately a decade after taking the throne, Zedekiah saw his city and its temple razed to the ground by the army of Babylon. The population was taken off to exile, a time which would last about half a century and change the complexion of Israelite faith forever.
In today’s narrative, the nobles petition Zedekiah to do something about this gadfly Jeremiah. Zedekiah, never very firm, gives them permission. And Jeremiah ends up in a cistern. The cisterns are a famous feature of Judah, collecting water during the rainy season and lasting well into the dry. In certain areas of the ancient world, they made habitation possible. The cistern in which Jeremiah finds himself is almost dry. But not quite. It still retains a muddy deposit. Jeremiah’s life is at risk. But as far as the nobles are concerned, he is out of the way.
Ebed-melech the Cushite petitions for him. The name simply means “servant of the king.” It is not a proper name. We do not know his name. Cush is often identified with today’s Ethopia or Egypt. He is not a Judahite and, apparently, can see beyond their fervent nationalism.
Jeremiah survives that day. And, in fact, he will even survive the fall of Jerusalem, will not go to Babylon, but instead leave with a group heading for Egypt. A new phase begins in salvation history.
The Gospel passage, about bringing fire to the earth, would put Jesus in the prophetic tradition. It recalls the time James and John wished to call fire down from heaven upon the towns of Samaria. But today the fire is more about tensions within families, caused by discipleship of Jesus. He is headed toward Jerusalem, where the Gospels see his actions paralleling Jeremiah’s.
For reflection: Was Jesus a prophet?
Father Beck is professor emeritus of religious studies at Loras College, Dubuque.
[/ms-protect-content]

We are in a new creation

Love one another, as I have loved you