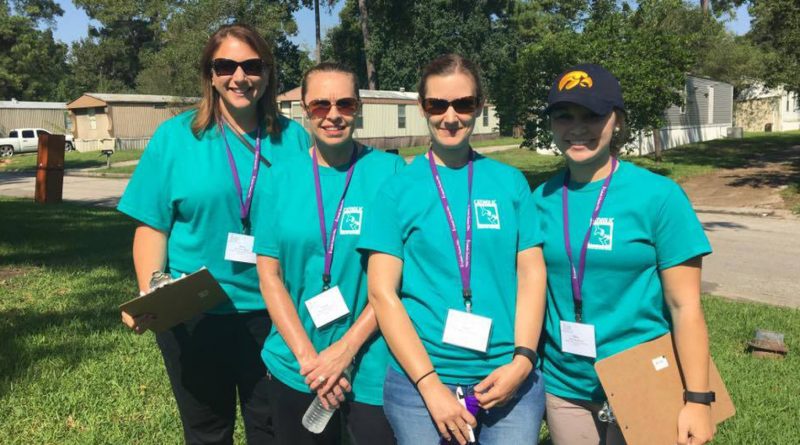 In response to a series of devastating hurricanes and tropical storms that struck parts of the Untied States, Mexico and the Caribbean in recent months, individuals from the Archdiocese of Dubuque have found ways to help those in need in some of the areas hardest hit.

Several members of the Catholic Charities staff for the Archdiocese of Dubuque spent time in Houston this fall assisting with disaster relief efforts in the aftermath of Hurricane Harvey, a powerful Category 4 hurricane that hit the Texas Gulf Coast in August, inundating the area with record amounts of rainfall and causing massive flooding.

Just weeks after the hurricane hit, Catholic Charities USA (CCUSA) was scheduled to hold its annual conference in Houston from Sept. 27-30. As a result of the storm, CCUSA coordinated with the local Houston Catholic Charities office to make adjustments to the conference agenda to allow participants time to engage in disaster response activities.

Stacy Martin, Lori Williams, Lynne Lutze and Mary Ready, all representing Catholic Charities of the Archdiocese of Dubuque, took advantage of the altered conference schedule to do their part to help.

During one of their afternoons in Houston, the four women joined a group of about 50 others at a distribution warehouse where the local Catholic Charities agency was storing donations coming in from across the country. The group put together packages that consisted of food, personal hygiene products, cleaning supplies and diapers.

“At this point, recovery was still all about getting people basic necessities that they still needed,” Martin said.

The following day, the four headed to a part of downtown Houston that had been especially impacted by flooding where they “canvased the neighborhood,” going door-to-door and asking residents if they needed any of the items that had been packaged the day before. They also collected information from residents on how the flood had affected them — documenting whether they had experienced personal property loss, a loss of income, and whether anyone in the home had medical issues or was hurt as a result of the storm. The information they collected will be used to help residents get assistance for long-term recovery.

Driving through residential neighborhoods, the women said they saw endless piles of furniture, carpet, drywall, clothing and other personal items that had been ruined by the rising waters and placed along the streets outside of homes. Many families that had been displaced during the flood were just returning to their houses and beginning to absorb the impact of the destruction.

“When we spoke to people and came with donations, some had tears in their eyes. Many said, ‘God bless you,’ and they were overwhelmingly grateful to Catholic Charities USA for their help,” Martin said. “It was amazingly powerful to see all the monetary contributions that people had given from all over the country being put directly into the hands of those affected.”

Williams, who coordinates disaster services for the Archdiocese of Dubuque, knows from her work how devastating natural disasters are for the families and communities impacted by them, and she said she was happy to be able to help storm victims in Houston and those working to assist them.

“For us to be able to help in Houston, for just two days, helped lighten the load for those responding to this need every day,” Williams said. “And, to show the community that Catholic Charities (agencies) across the nation are united in prayer and support for them was perhaps the most important thing we could provide.”

Rich Earles, a claims and risk manager for Catholic Mutual Group, the nonprofit organization that provides insurance coverage to the parishes and schools of the Arch­diocese of Dubuque, also recently spent time in Texas assisting those impacted by Hurricane Harvey.

Catholic Mutual is the leading provider of property, liability and employee coverage and related insurance services for the Catholic Church in North America, according to its website.

Earles traveled with four other Catholic Mutual employees to the Diocese of Victoria, Texas, arriving there on Sept. 10 to assess storm damage and process insurance claims for Catholic schools and parishes in the area. Earles said his organization wanted to make sure its members in Texas were taken care of and that their own people were on the ground to serve members’ needs.

“I inspected the damage, explained coverages and worked on repair plans with them to help them navigate the process,” he said.

Though independent adjusters have now been assigned to do much of the “leg work” for these claims, Earles said he would continue to supervise the claims from Dubuque until their conclusion.

The degree of damage he encountered during his six days in Texas varied from place to place, Earles said, with the most extensive being along the coast. Most of the damage he saw in the Diocese of Victoria was caused by wind and wind-blown rain. Despite the widespread destruction, Earles said the individuals he worked with remained hopeful about the future.

“The people were resilient,” he said. “They knew it would take a while to get back to normal, but they also had faith that it would.”

Just a week after Hurricane Harvey made landfall in southeastern Texas, Tropical Storm Lidia unleashed its on fury on the residents of the Baja California Peninsula in western Mexico. Following the storm, staff members of the Archdiocese of Dubuque’s Pastoral Center came up with a way to help those who were suffering in the aftermath.

Kevin Feyen, the director of Adolescent Faith Formation for the Archdiocese of Dubuque, had about 125 leftover T-shirts from Totus Tuus, the catechetical program that his office coordinates each summer for students in the archdiocese in first through 12th grade.

Though Carol Gebhart, who works as the director for the Protection of Children and Young People at the archdiocese, was aware of the surplus of shirts, she didn’t think much of it until she began seeing posts on social media about the devastation caused by Tropical Storm Lidia in Cabo San Lucas, a city on the southern tip of the Baja California Peninsula.

Gebhart’s cousin — Kristy Runde — has a home in Cabo San Lucas and does charity work in the city. In the aftermath of the storm, Runde was rallying family and friends asking for donations and supplies to fly to Mexico.

“Kevin was talking about having all these leftover shirts, and I had just seen Kristy’s posts from Cabo — particularly one photo where two to three families were living under a tree,” Gebhart reflected. “It just hit me — could we maybe send these shirts to Cabo?”

When Gebhart shared the suggestion with Feyen, he thought it was a good idea as well. The T-shirts were given to Runde who brought them to Cabo San Lucas on Oct. 20 to be distributed to the people of the community whose homes and livelihoods had been destroyed.

A group of WWII and Korean War veterans, some of whom live in the Archdiocese of Dubuque, also wanted to do their part to help those suffering in the wake of recent storms.

An association of shipmates representing the USS Montague AKA 98 sent a check this October in the amount of $500 to Catholic Charities of the Archdiocese of Dubuque for hurricane assistance. The group of veterans served together on the same ship for 3 ½ years before going their separate ways. After 40 years apart, the veterans began holding an annual reunion, and after recently celebrating their 27th reunion together, decided they wanted to make a gift as a group to help storm victims.

“We would like to assist in the relief efforts from the recent hurricanes and flooding. We thought Catholic Charities would be best in directing our donation in that regard,” said Diane Raftis, the association’s secretary, in a letter that accompanied the donation.

Children in Catholic schools in the archdiocese have also taken steps in recent months to help those impacted by hurricanes and other natural disasters.

At St. Francis Catholic School in Marshalltown, students and parents participated in a “penny war” fundraiser, which raised more than $1,000 for storm victims. The money was matched by Hy-Vee and went to the American Red Cross.

Matt Herrick, St. Francis’ principal, said the school encourages students to participate in dozens of service projects each year, and he said the latest penny war shows “how much the students have taken helping the needy to heart.”

In Cascade, students, teachers and parents of Aquin schools conducted a penny war of their own during the week of Sept. 17 that raised $1,961.43 for hurricane relief. A check in that amount was given to Student to Student, a campaign of the National Catholic Educational Association which is sending funds to dioceses in hurricane-ravaged areas for their Catholic schools.

“I was deeply touched by the outpouring of support the students, parents and staff demonstrated during our penny war,” Aquin Principal Vicki Palmer said. “I am very proud of everyone’s willingness to put their faith into action to help those impacted by the recent hurricanes.” 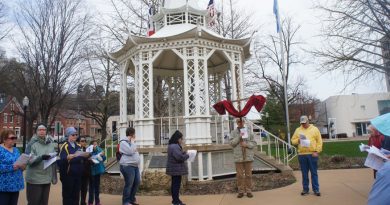 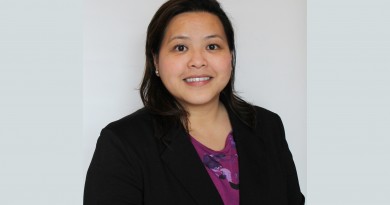