Ezra the priest reads the law

One body, many parts

Jesus reads in the synagogue 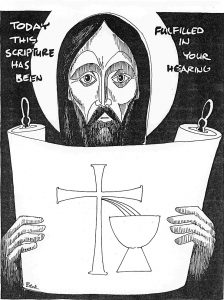 Last week I finally finished a book I had been working on. It is about Luke’s Gospel, and it has been sent off to Wipf and Stock, the publishers. I mention this, not only because I wish to sell copies, and no doubt will be talking about it again after it is printed and ready to read. But the main reason for mentioning it now is that the germinating idea for the book came from this Sunday’s set of readings.

Awhile back, preparing to talk about the readings from Ezra and Luke, I realized that though they appear superficially to be similar, they are quite different. Their similarity is in the fact that in both cases we see a renewal of sorts, beginning with a public reading from the Scriptures. But the meaning is different. Let me explain.

Both of these Scripture readings are responses to the situation in which Israel found itself after its return from exile in Babylon. During that time of life away from the land, an important voice was that of an unknown writer who took the prophet Isaiah as his model. Eventually, his writings were included at the end of the book of Isaiah. It appears that Chapters 40-55 were written in Babylon, and Chapters 56-66 were written after their return. Scholars identify two anonymous prophets they call Second Isaiah and Third Isaiah. Some in the Jewish tradition see only one. But it was more than one prophet; it was a community of such.

The vision of these chapters, developed during the time of exile, was that Israel was being commissioned to witness to the wider world, as “a light to the Gentiles” (42:6; 49:6). This school of thinking came back to the land with them.

However, conditions were difficult upon the return, and the feeling grew that Second Isaiah’s viewpoint was visionary and impractical. It was set aside as “eschatological,” belonging to the end times. In opposition, another school of thought developed, represented by the governor Nehemiah and the priest and scribe Ezra. The thinking was that hostile conditions required the returnees to circle the wagons and attend to matters of survival. And this was what today’s reading from Nehemiah is about. Nehemiah built a wall around the city (Neh 3). Ezra led a renewal movement that involved dissolving all intermarriages with those outside the returning community (Ezra 9). About this time certain identity markers became crucial for the returned exiles — Sabbath observance, circumcision, food laws and marriage laws. These served to demonstrate to themselves as well as to others the character and cohesion of the Jewish community.

Fade forward to the time of Jesus. Today’s selection from Luke indicates the beginnings of Jesus’ ministry. Not only does the lectionary give us the beginning of the book itself, Luke 1:1-4, but it jumps forward to Luke 4:14-21, in which Jesus is shown beginning his public ministry. It begins with a reading from Isaiah 61:1-2.

On one level, Luke shows Jesus commenting on his baptism. “The Spirit of the Lord is upon me.” He is to bring glad tidings to the poor, release to prisoners and the oppressed, sight to the blind. This announces his coming ministry in Galilee.

On another level, though, he is invoking the alternative post-exilic tradition of Judaism, the tradition that has been mothballed, but is now being revived. Over the defensive Judaism of Ezra, the message of Second and Third Isaiah, of “a light to the Gentiles,” is proclaimed as the theme of Jesus’ coming. Simeon had anticipated it (Luke 2:29-32), but now there is a new message: “Today this Scripture passage is fulfilled in your hearing.”

For reflection: “Witnessing to the Gentiles” is Luke’s theme, in both the Gospel and Acts of the Apostles.