My father was a wandering Aramean

Be with me, Lord

Paul speaks to the Gentiles

Temptations in the wilderness 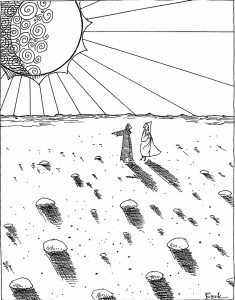 With Lent, the Sunday lectionary moves to a special set of readings. Whereas during the ordinary church year the Gospel readings provide the narrative thread of continuity, this is not the case in Lent. The first two Sundays traditionally feature the Temptation in the Desert and the Transfiguration, respectively. The other Sundays select appropriate passages for the season.

However, in the Old Testament readings, we do have something of a narrative sequence, insofar as they take us through the history of Israel in chronological order, albeit in large strides. Typically, a passage from Genesis, another from Exodus, perhaps something from the historical books and then the prophets.

This year we begin with Deuteronomy, but it is a passage that speaks of the Genesis story. The brief recital beginning, “My father was a wandering Aramean,” speaks of the patriarch Jacob and his family moving to Egypt. But it continues on to mention the exodus from there, under the leadership of Moses (without naming him), finally settling in the land. The passage is famous as a recital in the Passover Haggadah, in response to the question, “Why is tonight different from all other nights?”

In effect, the passage is a summary of the first books of the Bible, presented in the form of a creed. Its attention to the exodus and travel through the desert to the promised land may suggest a link with today’s Gospel reading.

The passage from Romans is taken from that part of the letter in which Paul turns his attention toward the Gentiles in that community (Rom 9-11). In the selection for today, Paul has just cited the law of Moses and now widens his argument to make the case that belief is sufficient for salvation, even for Gentiles. “For there is no distinction between Jew and Greek; the same Lord is Lord of all.”

Luke’s version of the desert testing of Jesus differs a bit from Matthew’s ac­count. Only these two recount the three-fold temptations, but they have the last two in different order. In both, the temptation to turn stones into bread is the first. In Luke’s order, this is followed by Satan’s offer of the kingdoms of the world. The final temptation is that Jesus cast himself down from the temple parapet to be saved miraculously by God. In each case, Jesus answers the devil’s challenge with a quote from Scripture. And in each case, that is from the book of Deuteronomy, the source of the first reading for today.

Noticing Jesus’ method of responding with a Scripture quote, the devil himself tries to do the same the third time around. He cites a passage from Psalm 91:11-12, which Jesus once again answers with a line from Deuteronomy. Psalm 91, how­ever, is also our response psalm for today!

The Gospel story of the temptations in the desert has prompted many interpretations through the centuries. Famously, the parable of the Grand Inquisitor, in Dostoyevsky’s “The Brothers Karamazov,” interprets the parable as a claim for human freedom, against easy solaces frequently offered by religion — miracles, mystery and authority (following Matthew’s sequence).

The Gospel itself presents the three tests as possible ways Jesus might fulfill his role as Messiah. But each of them is inadequate, as shown by the responses taken from Deuteronomy. Feeding the multitudes is a blessing, but there are deeper hungers. World authorities (in this case Rome) may prevail, but there is a higher authority. A life of faith may be lived in God’s care, but trusting is not the same as testing God.

As temptations against living out his role as Messiah, we see that these are possible distortions of the “kingdom of God.” It will be something other than these.

For reflection: Three episodes and Scriptures — worth pondering.

God so loved the world …