Today we hear about the Israelites’ first Passover in the Promised Land and the last of the Manna, now that the desert is behind them. And Paul tells us we are a New Creation. Meanwhile, in the gospel story, we have come to the parable of the Prodigal Son.

Possibly the most famous of the parables of Jesus, this story of the errant son is a third in a series in Luke 15, coming after the parables of the Lost Sheep and Lost Coin. But the story of the Prodigal overshadows these two. Not only is it much longer, but it also involves human drama. 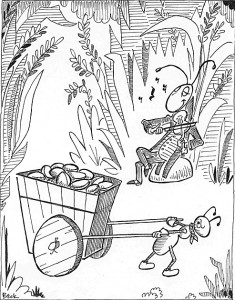 Furthermore, it does not stop with finding the lost one, as the earlier two parables do, but rather it continues on to tell of the other brother as well. In effect, the parable makes explicit the comparison between them. Notice, for instance, that they end with the same refrain: the prodigal son “was dead and has come to life again; he was lost and has been found” (Lk 15:24, 32).

Often these are contrasts between re­pentance and its lack. The lack can consist of pride in one’s success in following the law, as with the Pharisee in the temple praying, or it can simply be a lack of care, as with Simon compared to the Repentant Woman, or the Good Thief compared with the unrepentant thief.

In today’s parable, we have a contrast between the careless son and the obedient son. I am reminded of Aesop’s story of the Ant and the Grasshopper. You will remember that the Ant, being an industrious sort, prepared adequately for the winter. The Grasshopper, fond of singing day and night, spent the summer making music, without considering the future. When the cold weather came, the Grasshopper turned to his neighbor, where he found that the Ant was not going to help him. Aesop sees a moral tale here, since the Grasshopper was required to suffer the consequences of his decisions.

However, the parable of the Prodigal is quite different. The ending is flipped. The irresponsible son is forgiven and his return celebrated. This provokes no little resentment on the part of the older son, who feels he is unrewarded for his diligence.

Of course, he has all he needs, or wants. It’s just that he feels it doesn’t mean much when his brother receives the same thing. His sense of reward for having been compliant and dutiful requires that his brother suffer for failing to be so. When it doesn’t happen, he feels cheated. His father invites him to rejoice in his brother’s good fortune, but he won’t. It galls him that his brother might be getting off free. Were all his years of faithful obedience just a joke?

The ancient problem, explored more recently in the book by Rabbi Harold Kushner, is “Why do bad things happen to good people?” The eternal problem of evil has bedeviled people for ages, to which the book of Job provides adequate testimony.

But there is this other problem we also have — “Why do good things happen to bad people?” We can’t simply rejoice in the blessings of others, we want them to pay for it. While not as profound as the problem of evil, it certainly gets a lot of attention.

For reflection: Why does mercy annoy us so?

To whom will you give your allegiance?