Lo, the day is coming

Sing praise to the Lord with the harp

Some are not keeping busy

Not a hair on your head will be destroyed 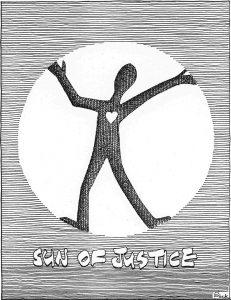 The Old Testament passages that the lectionary selects often have an importance to the New Testament in their own right. So it is with the book of Malachi. So this week we are going to take a closer look at this prophetic book.

It is not hard to find in the Bible, since it is the last book in the Old Testament section. However, it was not the last to be written. While it is not dated, and its author is anonymous,  the temple has been rebuilt, which puts it after 520-515 B.C. Topics such as the choice of inferior animals for sacrifice and the diatribe against mixed marriage reflect the reforms of Ezra and Nehemiah, around 450-400 B.C. The prophet should probably be seen as a part of that reformation movement.

At the same time, “Malachi,” which means “My messenger,” is not a name. Most likely it is a reference to Mal 3:1 — “Now I am sending my messenger … .” As a matter of fact, this three-chapter work is the third in a series. If you check Zechariah 9:1 and 12:1, along with Malachi 1:1, you will see that each announces “An oracle.” The notion is that each introduces a short anonymous book of prophecy — Zech 9-11; Zech 12-14; Mal 1-3. Two were attached to the original book of Zechariah 1-8, and one set on its own, adjusted to make the collection of minor prophets form a single scroll, known as “The Book of the Twelve.”

This strict and serious prophet didn’t hesitate to invoke “the day of the Lord.” That is why he is invoked in this part of the church year, when our Scriptures turn to apocalyptic texts. Malachi’s particular contribution is that of the refining fire. Often when the prophets speak of suffering they talk about it in two ways. For the wicked it means destruction; for the faithful it means discipline and purification. This is a favorite trope of Isaiah, for instance. Today’s passage reflects this as well. The fire is imaged as flames burning through a field of stubble. But then the major fire of the sun is praised for its healing rays.

While the present passage from Malachi contributes to today’s theme, it has a larger importance to the Gospels as well. This can be seen in the last verses of the book. These verses are probably a later (though very early) addition to the book. The author of these verses identifies “my messenger” as Elijah, who was said to return before the Messiah arrived.

In the Gospels, the messenger is identified with John the Baptist. Mark introduces his Gospel with a quote from Malachi 3:1 — “Behold, I am sending my messenger ahead of you; he will prepare your way” (Mark 1:2).

Similarly, in his canticle, Zechariah, the father of the Baptist, speaks of his coming son — “And you, child, will be called prophet of the Most High, for you will go before the Lord to prepare his ways” (Luke 1:76). Both Matthew and Luke speak of a baptism of the Holy Spirit and fire (Matt 3:11; Luke 3:16). Furthermore, the image is fleshed out with scenes of purification and destruction. “He will clear his threshing floor and gather his wheat into his barn, but the chaff he will burn with unquenchable fire” (Matt 3:12; Luke 3:17). This image is indebted to the passage we have in today’s first reading, with the stubble fire running through the dry field.

For reflection: The New Testament builds on Old Testament passages, giving them new meaning, but not erasing the former meaning those passages held.

Note: Although The Witness is being published in the hard copy edition every other week, this column appears weekly in the online version.

Lord, my heart is not proud