A reflection on Passover

Our soul waits on the Lord

Words for servants and stewards 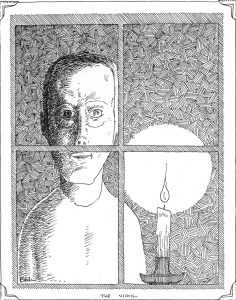 Again Jesus is teaching his disciples. At first, he speaks of their need to live simply. He speaks in language that reminds us of the instructions before the mission of the Twelve (Luke 9:1-6) and the Seventy-Two (10:1-12). Trust in God, not your earthly possessions. “For where your treasure is, there also will your heart be.”

Quickly we discover the reasoning be­hind the advice. The disciples (intended to include Luke’s readers) find themselves situated in the time between the first coming of Christ and the future culmination of the end times. In the meantime, they are to keep vigil. Like the Son of Man, who “has nowhere to rest his head” (9:58), they are to travel light. They are on the way, and not at their ultimate destination.

Jesus elaborates the point with a parable about servants who are waiting their master’s return from a wedding. Those who remain vigilant will be rewarded. Returning and finding them keeping vigil, “he will gird himself, have them recline at table, and proceed to wait on them.”

Halfway through the instruction, Peter interrupts Jesus with a question. “Lord, is this parable meant for us or for everyone?” (12:41) At this point, Jesus shifts his attention from the disciples in general to the twelve Apostles. As seen in the book of Acts, Luke’s second volume, the Apostles will be in authority after the death and resurrection of Jesus (Acts 8:1; 15:6ff.). Still speaking of the present as the “in-between time,” Jesus addresses the role of those in leadership positions. His parable of the “stewards” who are put in charge while the master is away emphasizes their particular need for vigilant care. They will be held accountable.

The first reading is generally selected to reflect the themes of the Gospel of that Sunday. In this case, it is the book of Wisdom. This book was written late, some 50 years before the birth of Christ. We are in the third part that begins with chapter 11. This section is a reflection on the Exodus, comparing the fates of the Israelites and the Egyptians in that story. The lesson unfolds in five comparisons, each based on a key image. Meanwhile this pattern is interrupted a couple of times with lengthy digressions meditating on the meaning of God’s mercy, choosing them as a people.

In today’s reflection on the first Passover eve, the passage evokes the trust and vulnerability of the Israelites, as they were about to depart in the middle of the night. Their situation is presented as a parallel to the faithful community following Jesus, in risk and hope.

The second reading is much longer than usual. We return to the letter to the Hebrews, which we haven’t heard from since this time last year. Again we are entering the biblical book where it begins a new section. The ten chapters of meditation on Psalm 110, presenting Jesus as High Priest, is now over. Beginning with chapter 11, the author turns to examples of faith, a “great a cloud of witnesses” from the Hebrew Scriptures. Abraham, today’s featured example, receives by far the greater coverage. And we have most of it in the reading for today.

The faith of Abraham is shown in his willingness to pull up stakes and travel across the middle-east to a new location, simply because God told him to. They lived on trust in the new land. And then he believed God would provide him with offspring though he and Sarah were both far beyond the age this seemed possible. And then Abraham survived the near death of Isaac, the son through whom the promise was to be fulfilled.

For reflection: The Jewish tradition commemorates the ten trials of Abraham, all of which he survived through faith in God.

God so loved the world …

Lo, the day is coming