Woe to the negligent leaders

Justice for the oppressed, food for the hungry

The rich man and Lazarus 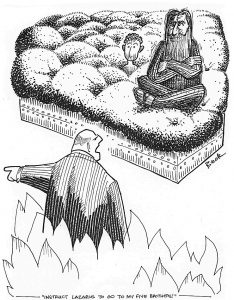 Two of the passages of today’s liturgy used to serve me well in Bible classes. They offered a demonstration of literary forms in the Bible. I might share some of those considerations here.

Hebrew poetry is based on something called parallelism. Basically, it is a rhyme of sense. You lay down a line, and then you say it again in different words. It comes in three varieties — synonymous, anti­thetical and synthetic. The first basically repeats; the second says the same thing in opposite ways; the third only pretends to repeat but actually moves on to a new idea.

Parallelism is a flexible and interesting format. In addition to pairing individual lines, it can also take two lines that are actually synthetic and repeat them, so that one couplet matches the next. Or, it can get much more adventurous, as in the passage from Amos today.

The passage begins with an introduction from Amos 6:1 and then jumps down to 6:4-7. And here is gets interesting. The parallelism works in “rhymed” couplets. But these in turn are arranged in parallel patterns. Notice how the couplets work in sets, with vv. 4-6 arranged like this —

“Lying upon beds of ivory …

They eat lambs from the flock …

They drink wine from bowls … .”

But this is followed by a single-line zinger: “And yet they are not made ill by the collapse of Joseph!” Here “Joseph” is a poetic name for the nation of Israel, as the northern kingdom was largely made up of the Joseph tribes of Ephraim and Manasseh. One is invited to speculate what sickness came from all that over-feasting.

The lesson, of course, is that the leaders have gorged themselves on the resources of the nation, leaving the people in destitution. Amos is unsparing in his criticism of the self-interest of the leadership, at the expense of the people they supposedly are serving.

Also, there is a bit of irony. Amos criticizes their effete concern to be sophisticated. But his criticism takes the form of a sophisticated poem.

The parable from Luke’s Gospel illus­trates another point. The Gospels are considered to have been written from collections of Jesus stories that were passed down for a few decades in oral form. Oral traditions have certain restrictions, requirements that enable them to be passed along intact. For instance, there is not much dialogue. Typically, stories in the oral tradition have single-line statements by the characters. Think of for instance, nursery tales.

One such rule is that stories cannot handle more than two people at a time. It is just too confusing. In today’s story, we begin with the rich man and Lazarus. They live; they die. And then we move into the picture of the afterlife. But here a third person enters the picture, namely the patriarch Abraham. The rest of the story plays out with a conversation between the rich man and Abraham. Lazarus disappears, apparently looking on.

Knowledge of the form assists in interpretation, often. What stands out from the norm gets our attention. In this case, the story of the rich man’s life, in comparison with that of Lazarus, sets up the dialogue. Notice that the bulk of the passage is here in the last part. Here we get into more depth than we do in the simple story of Lazarus and the rich man trading places.

It is interesting to see how the rich man thinks he is still in charge. He directs Abraham to send Lazarus to his brothers. When that is denied he tries negotiating other options. At least he ends up thinking of others.

For reflection: Patterns of human relationships as domination and subservience do not seem to change that much.