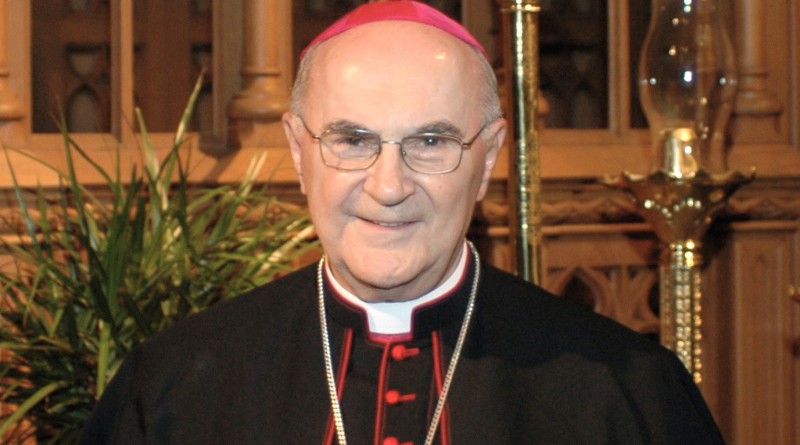 The following essay had a gestation period of over a year. I hesitated to make it public. I am old. Do I need to enter a vicious skirmish in our American society? Am I too harsh, etc.? Enduring an inane election campaign, however, forces me to action. If I hurt anyone to the point of action, I will be happy. Here goes:

Americans are outraged this past year at the reports of the brutality in the Middle East and now terrorism worldwide. The thought of beheadings and gruesome forms of terrorism is especially repulsive. Without minimizing these callous events, we need to remind ourselves of the words of Jesus: Whoever is without sin, cast the first stone. With some millions of unborn children aborted since Roe vs. Wade, and the very thought that such killings are legal in our own country, are we able to cast the first stone? Killing is killing whether by sword, bomb, or a “refined” medical instrument. Making it legal does not make it right.

When I came to Dubuque as Archbishop in 1984, I wrote a pastoral letter entitled “Abortion and the Unraveling of American Society.” Rereading that letter and assessing the increasing unraveling of American moral and spiritual values and even the danger of losing religious freedom some 30 years later brings shivers up one’s spine. The pastoral letter outlines six threads of our societal fabric already then unraveling at an increasing speed and threatening to destroy the very fabric of American political and social life:

No need to be a prophet to see the handwriting on the wall. Many thoughtful and God-fearing people saw then and now how imminent the complete unraveling is to the point of destroying our constitutional freedoms and the country itself.

We have lost the precise meaning of cherished words and phrases such as “love,” “gay,” “marriage,” “family,” “freedom,” “integrity,” and “rights.” Instead of shouting that these are our Christian heritage words and suggesting “Go find your own,” we meekly wring our hands and too often join other Americans in distracting fun and games.

Political correctness, elections influenced by so called scientific polls, and elected officials voting poll results rather than conscience, have made a farce of our republic form of democracy. God-given inalienable rights, such as freedom of religion are now merely human rights open to human tampering. The list goes on and the unraveling increases speed.

Historians who assess the rise and fall of the Roman Empire use the slogan: “Bread and Circuses.” Give them enough to eat and distract them with entertainment and the people will leave us alone to control society our way. Entitlement is now a right too easily granted by a government that fails to maintain the pristine meaning of the Constitution, which demands honesty and moral integrity. With the help of the media, the immoral entertainment industry, professional sports, etc., indolence and selfishness are now a democratic prerogative.

Those who read the Scriptures should see a parallel in the Old Testament. The sin of Adam and Eve was not disobedience. It was idolatry — denial of the one true God who gave them an intellect capable of untold creative thought. Such headiness got God’s people in trouble repeatedly and continued to turn them away to idolatry.

The Book of Genesis quotes God as saying, “Let us create man to our image and likeness.” Like us; not equal to us. Satan pounced on that by suggesting to Adam and Eve that God forbade them to eat from the tree because they would become like God, knowing good and evil. Our original sin from which the Son of God Himself had to redeem us has tantalized us as our divine-like powers of intellect tempt us to eat the fruit again and again.

The First Commandment: “I am the Lord thy God. Thou shall not have false gods before Me” has been broken repeatedly, and more so in our day. Americans are idolaters in love with themselves. Scientific advancement, fun and games, and available sustenance that is “rightfully” theirs are the idols of our day.

The writer of the classic book on Rome, “The Rise and Fall of the Roman Empire,” erroneously imputed the weakening of society to the rise of Christianity. God forbid that future historians will attribute the demise of the “American Empire” to a Christianity that practiced modern idolatry and made selfishness a state virtue, thereby destroying the greatest civil document in history, our beloved Constitution.

Where do we stand? On a precipice ready to fall? A few more selfish generations and the United States will be history. This time, however, Christians will really be to blame, having sold their birthright. And Catholics particularly will carry a heavy responsibility by abandoning Jesus’ full Gospel for bits and pieces comfortable to life in a decaying society.

What hurts so much for those of us with knowledge of the Catholic Church’s development in our free country is the shameful squandering of our power to stem the tide. Catholics in name are numerous in all three branches of government but their voting and decisions fail to show their belief. One wonders if some of the millions of aborted infants would have found their way into government with different results.

Not all is lost. There are signs that the generation now emerging into adult leadership has a firmer grasp of the situation than their parents and grandparents. If they and many adults who still follow the full teaching of Jesus Christ courageously fight the idolatry of our time, God will forgive and bless us. Otherwise one or two more selfish generations and the United States will be simply a few pages in history books. Bread and Circuses (Now modernized into Entitlement and Entertainment) will once again destroy an “empire” and with it the opportunity to save civilization. Who will have to answer to God? Those who gained the most from the freedoms of our country: so-called card-carrying Christians, especially Catholics, who give lip service but not themselves to Gospel values. As the poet John Dunne says: “Ask not for whom the bells toll; they toll for thee.”

Archbishop Emeritus Daniel W. Kucera, OSB, served as the tenth bishop (eigth archbishop) of the Archdiocese of Dubuque from 1983-1994. He is now retired and currently resides in the archdiocese.

The baptism of Jesus