THE RESURRECTION OF THE LORD

THE MASS OF EASTER DAY

The stone which the builders rejected

You were raised with Christ

Clear out the old yeast

The tomb is found empty 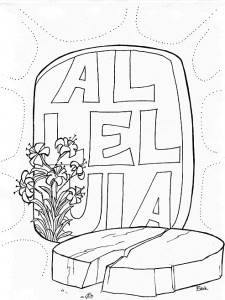 Here are some words about the images and vision offered in the richly imagined readings for today.

The first reading contains an early creed, one that summarizes the Gospel story. The sermons of Peter in the early chapters of Acts all follow this pattern, but its fullest expression is here in Acts 10. First of all, the speech gives a brief summary of the Gospel story — the baptism, the healing works, the crucifixion death, and the Easter rising of Jesus. But it also asserts that all of this happened according to the Scriptures. Finally, it makes the point that they, the apostles, are the designated witnesses for all of this. At the heart of Peter’s sermons can be found the commissioning of Matthias, the replacement apostle (Acts 1:21-22). There it makes it clear that the apostles are to be witnesses to the resurrection of Jesus. In Luke’s understanding, this forms the central meaning of apostleship. And, of course, that is why it is selected as a Scripture reading for today.

In the current lectionary we have two options for the second reading from Paul. The first is a selection from the letter to the Colossians. It expresses Paul’s mystical vision of our present participation in the resurrection of Christ. Paul is confident that we, the Christian community, are the Body of Christ. Thus we are in some way already involved in his present condition as risen. For now, that existence is hidden. But when the fullness of time comes it will be fully revealed. Paul’s moral lesson is that we ought to be living in the meantime as members of the risen Christ.

The other option for use as the second reading is a selection from the first letter to the Corinthians. It plays upon the image of yeast, or leaven. In the biblical tradition, in the world of Jewish ritual, leaven symbolically represents corruption. It serves this purpose by virtue of its silent, secretive work, unseen in the fermenting bread dough. It is by way of that feature that leaven became a symbol of a corrupting influence, working secretly and hiddenly in society. The Jewish house is prepared for Passover by clearing it of all traces of leaven, to suggest a similar cleansing of the faithful community. Along with Passover was the celebration known as the Feast of Unleavened Bread. In today’s passage, Paul exploits that imagery, no doubt with the Passover in mind, to represent the uncorrupted Body of Christ. For we are yeastless Easter people, and Alleluia is our song.

In the Bible, Easter stories come in two forms — empty-tomb stories and resurrection-appearance stories. On Easter Day, we hear tomb stories about the stone rolled away. The classic account of Mary Magdalen (“of Magdala” — a town on the eastern shore of the lake of Galilee) as it is told by John serves as the Gospel reading for the liturgy of Easter Day.

Mary is a presence in all of the Gospel accounts of the empty tomb. But John has a special way of telling it. We are to imagine the day beginning in darkness. As the light grows, awareness similarly grows in the faith of the disciples. Mary brings back word that the door of the tomb is open. This prompts a series of cumulative revelations. Next, Peter enters the tomb, as Mary didn’t, and discovers the cloths left behind, though not finding Jesus. The other disciple then also enters and he comes to understand the full meaning of the event.

As the sun rises with its growing light, the risen Son is gradually revealed.

For reflection: Why might resurrection be at the heart of the apostolic witness?

Exploring the six characteristics of a fully formed adult Catholic